Here is another post in my series on wildflower hikes in the Columba River Gorge.

I am in the process of revising my book, 60 Hikes Within 60 Miles of Portland, for a Spring 2018 publication. And since the last edition was put together, the Forest Service has gone and put up actual signs, on real trails, that even appear on maps(!), in the area from Coyote Wall to the Labyrinth to Catherine Creek. It’s the dawn of a new era, I tell you.

So this time, on 2017 Hike #5, I went up to the top of Coyote Wall, then came back down while checking out current and former (official and non) trails leading over to the east. There used to be all sorts of social trails in there, some of which still exist — but some of which lead onto private property. This, along with a huge increase in use, is why the Forest Service created a network of official trails — some of which even have signs! Green Trails Map #432S (East Columbia River Gorge) also covers this area, though it has the old trail names and doesn’t match up 100% with reality on the ground.

This is the fourth hike I’ve done this spring in the area. I have worked my way to the west, starting March 23 at Catherine Creek, then doing the western side of Catherine Creek on March 28. That hike overlaps briefly with the Labyrinth Loop I did on April 11, and that one just touches this one to the west. So there’s a lot of fun to be had in the area.

What are the Best Wildflower Hikes in the Columbia River Gorge? 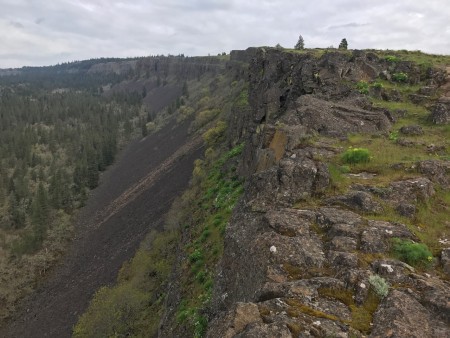 The trailhead for this one is the official Coyote Wall Trailhead, which is 6.1 miles east of the Hood River Bridge on Washington Highway 14. From there, you follow Old Highway 8 around the base of the wall, then up into a flower and rock garden that is just amazing in April. I don’t know many flowers, but as you can see from the photos below, there’s a ton of them! I can say that on this south-facing Washington side of the Gorge, the balsamroot (a wild sunflower that is the star of the show at Dog Mountain) is a little ahead of the Oregon side. Up at the top of the wall, they are peaking!

I went all the way up to Atwood Road, looped right and back around to the main trail, then descended a while and took trail #4427 east to the connection with #4426, Old Ranch Road. Note that the western end of #4427, at the big notch in Coyote Wall, is only labelled with a blank wooden post. The east end is where I found out what it’s called. If you are above the fence on Coyote Wall and take any other trail going east, you are at least unofficial and probably headed for private property.

I did 6.7 miles in a blistering (ahem) 3 hours and 26 minutes. That’s 1,572 feet of elevation gain — basically what it takes to get to the top of Coyote Wall around 1,700 feet. Here is my track from Gaia GPS, which I am really loving:

You can see the whole thing, with photos I took along the way, here.

And speaking of photos, here is my gallery from the day. Click through t see the whole thing, with captions. And maybe I’ll see you on the trail soon!

Read all my posts about Columbia River Gorge Hikes.