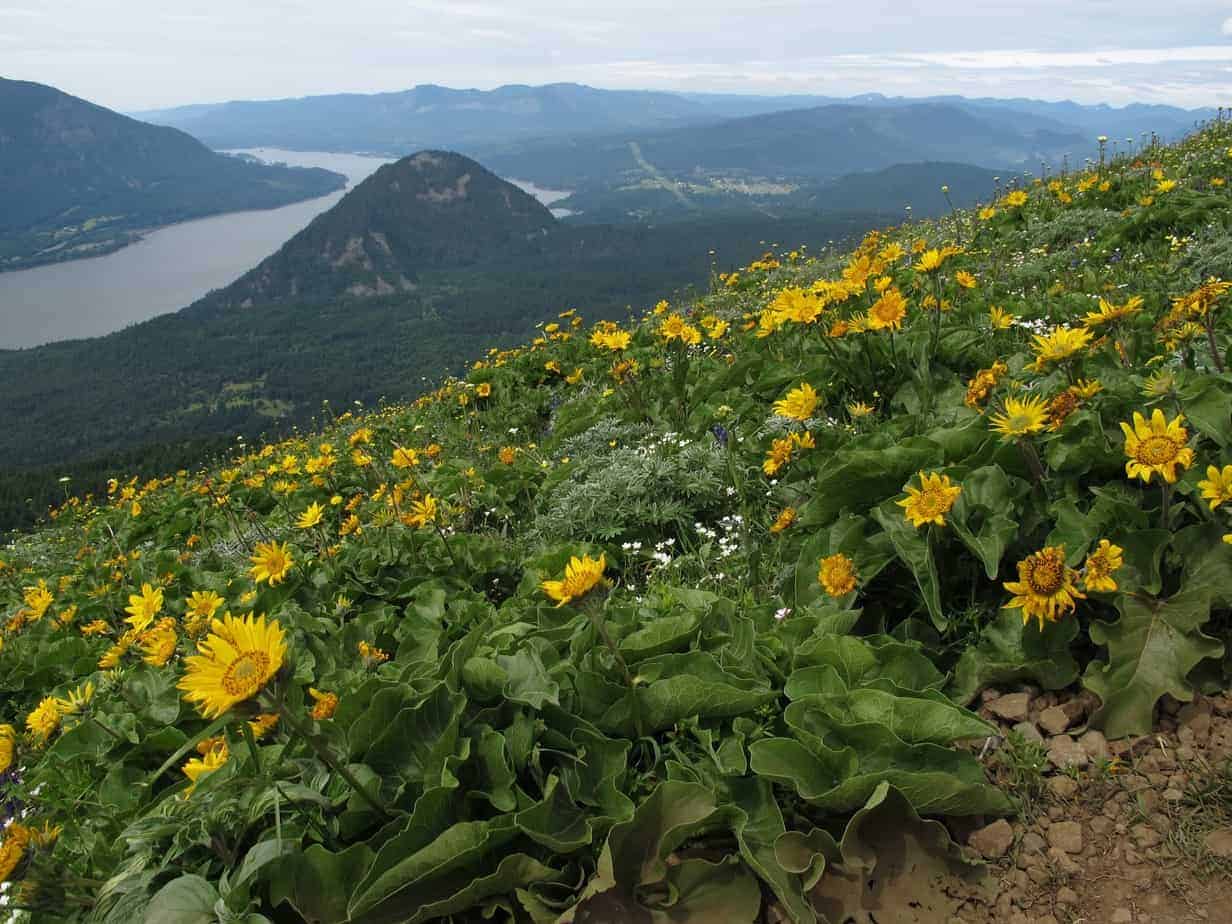 Inquiring hikers want to know: Which Gorge hikes are sporting wildflowers? Where is the snow level in the hills?

Well, I haven’t been out for hardly any hikes this year, which is more than a little embarrassing and frustrating, but hey — I’ve been producing books.

But plenty of people have been out hiking, and plenty of them gather over at PortlandHikers.org. So I just took a trip through a few pages of trip reports, and here’s what I found. I hope this is useful as you plan your weekend outings.

Lyle Cherry Orchard was showing some nice lupine in this May 7 report, but I suspect most of the show is finished there.

Dog Mountain was actually showing some color, including some balsamroot on top, on May 3. I wonder if we’re running early there this year? Normally this would peak in about 2-3 weeks.

You want to talk peak bloom? Check out the report from May 3 at Memaloose Hills. Oh my gosh!

Hamilton Mountain had some woodland flowers the same day, May 3.

Dalles Mountain Ranch was outrageous on April 26, so probably past peak by now.

Ditto for Deschutes River on April 23 — probably mostly over now.

So, bottom line on flowers, near as I can tell: Everything around the Dalles would seem to be about done, between Hood River and there (like Memaloose) is just going past peak. That seems to mean the “central Gorge” destinations like Hamilton, Dog, etc. will be going strong soon.

As For Snow Levels …

This is a trickier thing to track, because levels vary so much from one place to another. For example, in the 2014 Snow Level Thread, somebody reported essentially no snow at the top of Larch Mountain (around 4,300 feet) May 1, while somebody else reported snow in abundance on Defiance above 4,000, and somebody else was near Hood and saw no snow until 4,700 feet.

One good idea here is to post in the Q&A forum, asking for details. Otherwise, here are some tidbits:

Ramona Falls apparently has no snow — but also no seasonal bridge over the Sandy. Look for that in about a week.

Mount Defiance, in this May 5 report, had snow above 4,350 feet but nothing too troubling.

On May 3, somebody went up Eagle Creek and down Herman Creek — that’s quite a trek! — and found consistent snow above 4,000 feet. Nice flowers, too.

Sign up for my e-newsletter and get regular updates on hiking, Portland breakfast, and even English soccer.

Lewis River appeared to be snow-free on May 1.

Another Larch Mountain report, from May 7, confirms there’s no snow there.

Same thing for Salmon River Canyon. Somebody else went above Salmon River to Devils Peak on April 19 and found solid but manageable snow on top.

Or you could just skip all this nonsense and head for early summer — aka, the new state park at Cottonwood Canyon on the John Day River.

Okay, more next week. Maybe I’ll even get out for a hike in the meantime! Stupid work …