I took another hike in the Columbia River Gorge the other day, and the spring wildflowers just keep getting better! 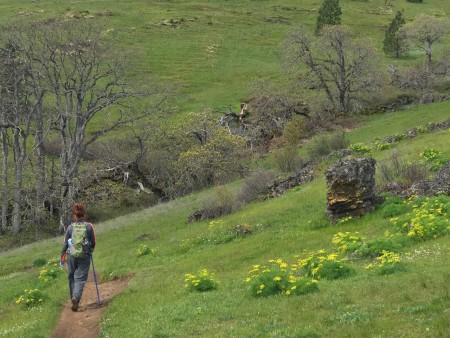 This time, I went to the Labyrinth and Coyote Wall area, just to the west of Catherine Creek. For perspective, this is around 5 miles east of the Hood River Bridge, on the Washington side of the Gorge.

There is a main Coyote Wall Trailhead, but I went to the next (informal) one, at the Rowland Lake turnoff from WA 14. From there, I walked along Old Highway 8, past a waterfall, then went up the Labyrinth Trail all the way to the CO8 Trail, then up that to Atwood Road — actually a trail.

On Atwood, I actually bumped into a friend who I knew was hiking in the area, and I joined up with him and his companions the rest of the way. We went west, eventually turning down the CO4 Trail, all the way to the Coyote Wall, where we stopped for lunch. Then we headed back east, along the Little Maui Trail, which led me back to my car. They were parked over at Catherine Creek and basically doing a longer version of my March 28 Catherine Creek West Loop hike.

Read all my posts on Columbia River Gorge Hikes Here.

For me, this was six miles, with right around 1,100 feet of elevation gain — all of it in the first 2.6 miles or so. Nice and gradual. Here is my track on GaiaGPS:

You can also check out the full version of that track here. 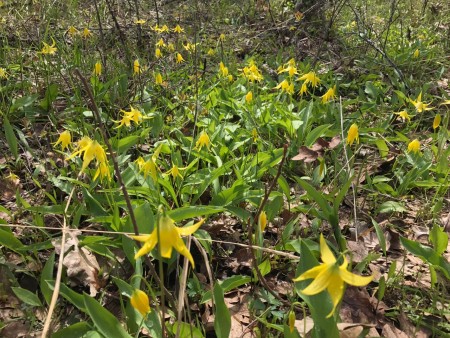 This is a great loop that has just enough effort to make it feel legit, but plenty of payoff as well. It is one of several in the area, and since it sits right next to Catherine Creek, you can combine it with two loops there — the one I did on March 28, especially; these two intersect along the section of CO8 Trail between Atwood Road and Labyrinth Trail.

As for the flowers, mid April is typically the time of year when they really start to pop. This year things are a little bit late, but we saw some early balsamroot in the lower areas, while still catching a few lilies in the woods along Atwood, as well as the last few grass widows, yellow bells, Oregon Grape, all sorts of stuff. I would say that, for 2017, the peak will be around the third to fourth weeks of April.

And speaking of flowers, check out my March 23 loop at Catherine Creek, as well as my list of the best wildflower hikes in the Columbia River Gorge.

Read all my posts about Columbia River Gorge Hikes.

Taxi Story: Sweeter Than a Bottle of Sprite