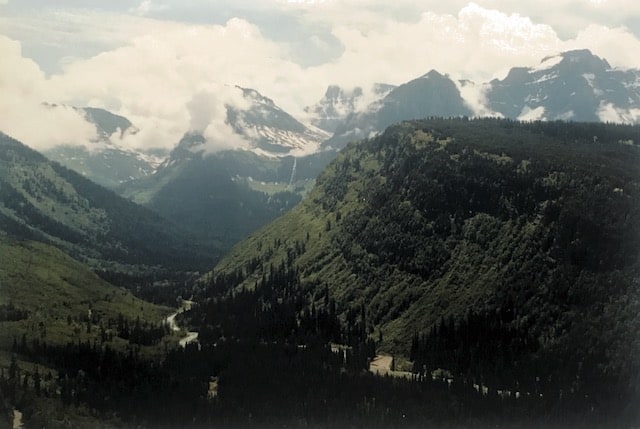 Here is a memory which is also a flash-forward. In April 1998 I visited Glacier National Park and went on a hike. That summer I wrote this travel article about it for the Memphis Flyer. And next summer I plan to be up there again, living in Montana.

So let’s go back in time for a taste of my hiking future.

The mountains are best early in the morning. The sun isn’t hot yet, the birds are just stirring, and the crowds of people haven’t come along to scare the deer out of the meadows or the ducks away from the shore.

When I started up to Avalanche Lake, it was after a rainy night, and I was making the first human footprints of the day. Behind me was a rented car parked beside the Going to the Sun Road. The drive to the trailhead had been beyond spectacular, well into indescribable: steep, snow-covered mountains, deep valleys, waterfalls, tall trees, blue water, and clear sky all lit up in the day’s first light.

The trail to the lake isn’t too tough, just a couple of miles gradually climbing, and it’s right in the middle of Montana’s Glacier National Park, but the vast majority of the park’s visitors never see it. They stay on the road and miss the show, leaving it to the lucky few.

The lake was formed because a glacier spilled over a thousand-foot cliff, then melted. The cliff is still there, a mile or more wide, adorned with waterfalls and topped off with a snowy ridge. It’s right across the lake from the spot where the trail comes in. Arriving there is much like walking into a cathedral.

Glacier Park is full of places like this, places that you can have to yourself for a few hours, or a few days. As I walked up there, I spooked rabbits off the trail and deer into the woods. I was, in turn, spooked by the bear warnings. Reminders of recent maulings aren’t what you like to read at the trailhead.

After the hike I would tell people I had gone up there, and they would say, “You went alone? Isn’t that dangerous? Weren’t you scared?” All I could think to say was, “How could I not go, just because I was by myself? It’s not like I’ll be back in Montana next week.”

I figure we even need rest breaks from vacations. You know how a trip gets to be like checking chores off a list? The day before I went up to the lake, I actually thought to myself, “Let’s see, I did the dinner at Tupelo Grill (with photo of Elvis) in Whitefish, drank for free in the Black Star Beer tasting room, stayed at the Non-Hostile Hostel, walked along the lake on the edge of town, and checked out the ski hill. Tomorrow I just need to go back to the Buffalo Cafe for breakfast again, have a beer at the Dire Wolf, then catch the train.”

Now I think, what was all that about? I woke up that next day with it still dark, my last day in Montana laid out blank before me, and it just hit me that, by golly, I was gonna go to the hills. Forget those “obligations.” I was so excited on the way out of town that I enthusiastically sang along with “Born To Be Wild.”

I got to the lake an hour and a half after sunrise. It was just starting to warm up. I took off my boots and socks and waded into the stream that feeds the lake, running right down off the snowy cliff. My feet went instantly numb. I splashed my face. I spooked two ducks into the air, and they skidded to landings in the middle of the lake. The wind stirred the treetops.

It’s the moments of silence that we actually travel for, isn’t it? I mean, visiting old friends and making new ones and seeing cool stuff is the backbone of it, but the whole point is to alter your surroundings, and thereby yourself, ideally in the direction of mellowness.

The beauty of it is, while I was alone at the lake with the ducks and the waterfalls, hundreds of people were back on the road I had left, having the drives of their lifetimes. What one person can’t wait to get away from, another one has dreamed of for years. That morning in the mountains, it seemed like everybody was where they wanted to be.

I left the lake after a while, needing after all to catch that train. When I got to the trail, there were two couples sitting on the little beach there. All anyone said was, “Beautiful, isn’t it?” Then suddenly a dozen people showed up all at once, following a ranger who delivered a bit of science and information to, I suppose, explain what we were looking at.

The trail back to the road seemed filled with people, since there were probably another dozen of them on their way up. Some looked real tired, like they’d never make it, and one of them caught my eye as I skipped down the hill.

“Did you go to the lake?” she asked. She was sweating at 10 a.m. and leaning hard on a walking stick. I said I had been to the lake, and she asked me, “Is it worth it?”

“Well, I just don’t see how I can make it.” She looked at me with something like desperation in her eyes.

“Look at it this way,” I said. “It’s pure magic up there, is the main thing, and you have the rest of your life to rest up afterwards. Right now all you have to do is go.”

I’m happy to report that she smiled and headed for the lake.