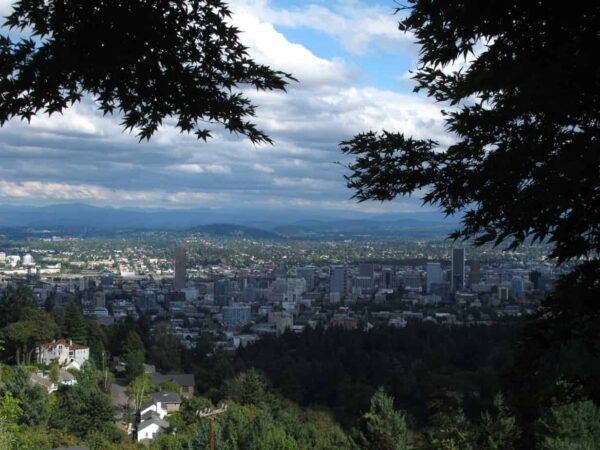 There’s really no significance to anniversaries, other than our tendency to take stock when they roll around. Where I “am” now versus where I “was” 24 years ago doesn’t mean a lot, but it is interesting to think about, as is seeing a photo of myself from back then and think, “Wow, I was really young!”

What did I think my life was going to be in 1996, when I arrived in Portland by Greuyhound bus, my car having finally died at an I-84 rest stop near La Grande, Oregon? (That, as they say, is “a whole nother story,” here in parts 1 and 2.) I had come to Oregon to get out of my hometown and away from that whole life, but also to explore the Pacific Northwest. I didn’t (and still don’t) orient myself around jobs or relationships, neither of which have stuck around for very long. I saw coming to Portland as going to a new area, close to many mountains, to build a new life. And I did.

Since I got to Oregon, I have sobered up (one of my first memories of living in Portland was the strength of the weed!), written quite a few books, made lots of friends, done some really cool traveling and hiking, started and stopped a few “careers,” and generally had a decent Portland Life.

Another thing, though, about looking back is remembering the parts of your plans that didn’t work out, for whatever reason. As I recall, for example, one appealing aspect of Portland was that it was “just a long day’s drive from the northern Rockies.” Yet in 24 years here, I think I have made that drive twice. Hell, I’ve only been to Mount Rainier National Park about three times, and that’s three hours away!

If I’m looking back, I could go back to before I moved here, when I made another attempt to move north and west from Memphis, towards the mountains. I looked for a newspaper job in the Rockies, and had some decent leads, but my drinking got in the way, and it was back for a few unhappy years in Memphis.

Even farther back, and deeper, there was always this other, really big, idea that I dreamed about: living on the road. It was always there, just beneath the surface, and occasionally looking just about possible. I would cash my check from commercial fishing in Alaska, then go hike a couple hundred miles of the Appalachian Trail. I would hunker in Memphis, gather up some cash, then go see a bunch of Grateful Dead shows. I thought my writing career might give me that flexibility long-term, but I finally realized I lacked the necessary hustle. I thought the summer fishing jobs would keep me moving, but my domestic side combined with my pot habit to keep me in town.

And why not, let’s go all the way back to the beginning, when as a shy, quiet 12-year-old kid, I first saw the Rocky Mountains in Wyoming at summer camp. The whole world opened up right then and there, and the combination of high country, open spaces and clean pine-scented air imprinted itself on me. From that moment on, a life in Memphis, geared around career and cars and wife and kids, was just not going to happen. And the northern Rockies assumed a mythical place in my mind.

I have always thought that someday I would find just the right combination of work, play, flexibility, writing, mountains and love that would add up to the life I had always wanted. I tried not to get hung up on the regrets, though they are many. And I tried not to get lost in the planning and dreaming (aka, the majesty and glory of next week.) No doubt I could go back and figure out how I was searching for this life in the wrong way, or starting in the wrong (exterior) place. But either way, I wasn’t finding it. Meanwhile, my Portland years somehow added up to 20 and beyond. And my life here was … fine.

And then a few years ago something started to shift. I didn’t recognize it at first, of course. Internally, I hit the age of 50, started to feel the occasional physical pain that wouldn’t go away quite as easily as it had before. I started adjusting to the idea that I probably won’t get married or find “true love” or whatever. I started to look up the trail and see my 60s and my 70s coming. I started to see people around my age suddenly not be around anymore. It began to occur to me that I was early in Act 3 of life, and that this life is not a dress rehearsal.

Externally, professionally, other things shifted. The rise of the internet meant mobile work was more attainable. I developed skills in professional driving and guiding that could be of use just about anywhere. I began to get some financial stability under me.

And somewhere along the way a friend in London took me to a soccer game. I loved it, and thought I might have a new book idea: explain English soccer to Americans. Following my usual instincts, and ignoring some very solid advice from some very smart people, I threw myself into it. I was writing, traveling, exploring, meeting people, and planning something: all things that make me happy. Then I started helping people plan trips, for which they (incredibly) paid me, and I stumbled into a chance to sell tickets. I threw in my tour-guiding experience and started leading small groups. I learned a bit about running a business. I concentrated on what felt right: helping other people have the same fun experiences I’d been having. I started to think crazy shit like, “Maybe all these things I learned were so I could do this.” And in 2019 I did over $300,000 in gross sales.

And then, in March, boom. A boom you already know about.

The thing about your whole life stopping at once is that, if you are lucky and survive it, you get a moment to really think. To take stock, I suppose. And this year has been more than a pause. In addition to my whole career stopping, both my mother and father passed away in 2020. It’s the kind of year that shakes you right down to your bones, and there’s been a lot of fear and sadness. But there’s also space, uncertainty and letting go. And a lifetime of aspring to the road has prepared me well for both of those.

But life is a long, strange trip, and in the middle of sadness often lie blessings. In my case, to be blunt, there’s money. Dad left me some, a final gift from an impossibly generous and supportive man, and while it’s not “Never work again” money, it is “Hang in there until your business comes back” money. So that’s what I’m doing. And I’ve been thinking. And planning. And thinking some more. And if you give my brain enough time to think, it’ll come up with something eventually.

Put it all together, and I’ve decided to leave Portland. Probably for good.

The thing is, I have finally found a way to earn a living from anywhere. In fact, the very best place for me to be, to run this business and make it grow, would be London. So that’s where I intend to be, as soon as the pandemic lessens its grip. I hope that’s next year. And in the summers, when there’s no soccer in England, I can be anywhere. Like Wyoming. So I figure in June I’ll head for Wyoming, and then Montana, spend the summer, and by October be based in London, until the end of the season in May. Then we’ll see.

Some people will always see leaving a place as rejecting it, and for me there was a lot of that in leaving Memphis. In 1996, I drove across the Mississippi River headed west with the Dead blaring, me singing along, the windows rolled down, and tears of joy in my eyes. But when I leave Portland, the tears, if they are there, will be something else. Perhaps just an appreciation of a really big moment, a very large wheel turning. I really like Portland, used to love it, and will always come back — if only for a handful of friends and Timbers games. And I will have stuff here, at least until I find some new version of “home.”

I could write many more words about how Portland has changed since I got here, but that’s not even the point. The point, for me, is why should I — and this is how you start to think at age 50 — not give my lifelong dream one big try? Why should I spend the rest of my hiking life looking for new nooks and crannies in the Cascades? Why let my relationship with my stuff hold me back? Why not go see the world, make a real living for myself, pick up a whole new set of skills as what the kids call a “digital nomad”? And if I’m doing all of that, why keep a place in Portland, or anywhere at all? In summary, why not go for it?

So I plan to hit the road.

Now, I also know 2020 well enough to know that the gods may well have something else in mind. For example, if they decide to keep Trump in power, I’ll leave a hell of a lot sooner. But I like having a plan, building towards something. And as of now, my plan is to have a big sale in May, get rid of most of my stuff, then leave Portland around June 1. I have rented two homes in Wyoming and Montana for the summer, and after that — assuming life returns to something close to normal — I’ll be looking for a place in London.

It may sound like a lot to some people, a big change and all that, but to others I know, and to me, it makes perfect sense. Sure it’s scary, but the fundamental question is, Why not? And while I am tempted to go on and ask myself, “Why is this just now happening,” I don’t feed temptations like that. Fact is, it wasn’t time before. It is now. It’s time for me to hit the road again. For real. And maybe for good.