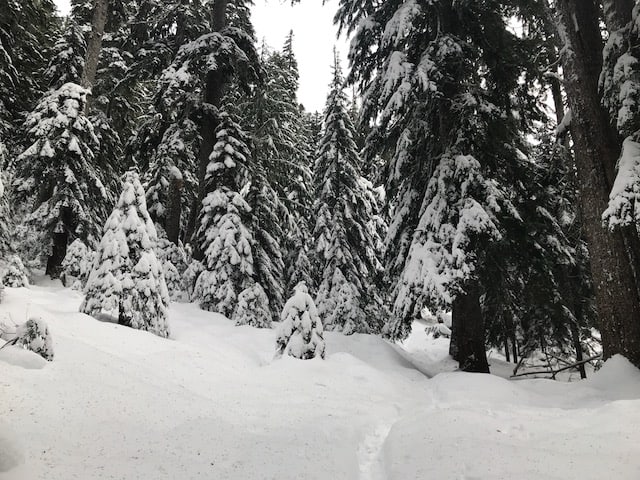 The original plan was Ramona Falls. This time of year, that can be a challenge, with snow on the road, the trail, and an already tricky river crossing on logs. So I would need an early start, some luck, and perhaps a little bravery. I set the intention the night before, and since nobody else was going, it was all on me.

I woke up to wind thumping the windows and tossing the wind chimes. And coffee. And emails. And since I wasn’t meeting anybody or on any schedule, I decided to chill a while. I could leave by, oh, let’s say 9.

And somewhere in there I noticed a pattern of thought developing: that if I started too late and didn’t make it all the way to Ramona Falls, I will have failed.

It wasn’t an explicit thought, but it was in there, and right behind it was the word “Again.” As in, failed again, “like I always do.” I would probably start late, or wuss out, or forget some gear I needed, or something. Make a plan, fail to execute the plan … loser.

Think that sounds crazy? Well, it is. But it’s my particular brand of crazy. I also wonder how common it is. But one thing I learned in years of meetings, Step work, meditation and therapy is that when a crazy old thought comes up, one has options for how to deal with it. Among many such options, three come to mind: run with it, sit with it, and let it go.

Running with it would lead to a lot of stress and worry, and/or maybe some motivation to get out of the house “on time” and make Ramona Falls. Your mileage may vary, but I have also learned that in the face of possible disappointment, I trend towards despair. Some folks get angry, some get fired up, but I go with “Yeah, I say 9 and make the falls, but that probably won’t happen.”

Sitting with the crazy would look like what actually happened: I say, “Oh, there’s that crazy old thought. And yeah, I probably won’t make 9 and execute The Plan perfectly. But whatever, I’ll have a day out.”

Letting it go would, I guess, be saying “there’s the crazy” and then not thinking about it anymore. I get there, eventually. Sometimes.

Anyway, my crazy and I had a nice morning together, answered a few emails, got some work done, and were in the car at 11. That would be on the trail at 12:30, sundown at 4:30, and who knows? If things break right, I could still make the falls.

Except the road was gated. I’d have to walk about two miles from there to even make the trailhead, and screw that. And right there, on a forest service road looking at a gate, is where I let go of The Plan, let go of the crazy, and entered the present moment for the first time all day.

It occurred to me then that I had slept well in a nice bed, gotten some work done for a business I own, turned over the day’s tasks to an excellent person I hired, and now I had half a day to myself up in the Cascade Mountains to do whatever the hell I wanted. Lucky boy.

So I kept going, up towards Lolo Pass, where there might be too much snow on the road but, hey, if there is, I’ll just go somewhere else. Even a scenic drive this time of year is nice.

The snow did get a little intense for my car, but I just made the pass. Success! I flipped a mental coin and chose north on the Pacific Crest Trail, a nice option because even though I did that section on a thru hike one time, that was so long ago that I don’t remember anything about what’s up there. Gotta love destination- and knowledge-free hiking! I wound up hitting the trail about 1:30.

The trail was covered in snow, the little creeks were frozen, the trees were frosted, and the mountains were out. It was most lovely. And then it ended, kind of all at once.

Why? Because the path rounded a scenic, cliffy bend, which is great in the summer but rather dicey when it’s buried in snow, where a wrong step and a slide could mean the end of you and they don’t even find your body until spring, and by the way this isn’t even where you told your safety check person you were going, so … um, no. The footprints I’d been following ended, and so too did my northbound walk on the PCT.

Purely improvising now, I went back and tried south, where I found a much more packed and traveled path. It was gorgeous, snowy-woods walking, again with no idea where I was going. I was just … out in the woods.

Some people coming back down said there was a viewpoint up there, somewhere, and I thought I saw it on the map. But I also saw the sun dropping through the trees, and I didn’t think I had time to make it without getting back after dark. And I didn’t need a new plan, anyway.

There was a moment, when I decided to head for the car, that I looked around at the trees and the snow and the sky and the setting sun, and I breathed in the cool, crisp air, and I listened to the silence, and I thought, “I’d have to be some kind of crazy to consider this a failure.”