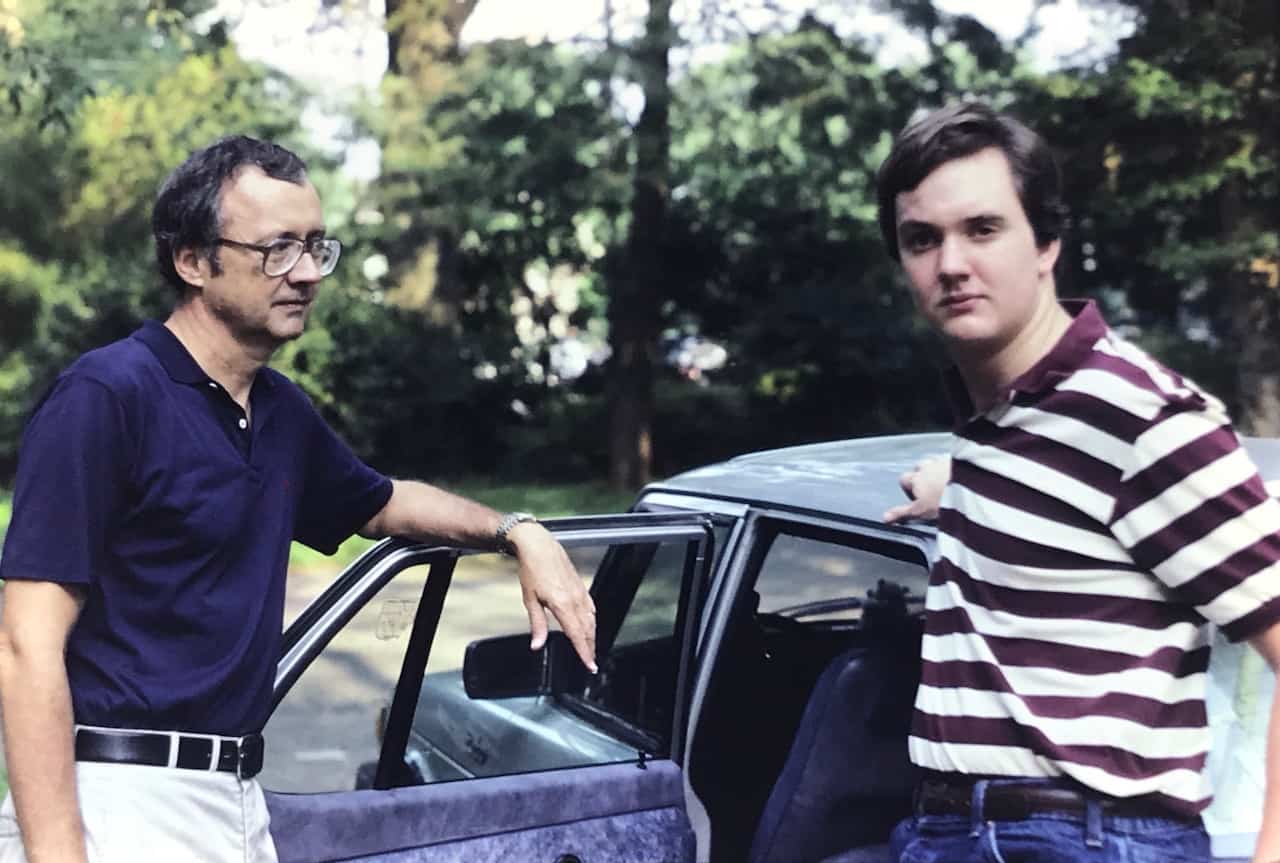 Many of the travel columns I wrote for the Memphis Flyer between 1996 and 2012 actually occurred well before that time. In this case, I reached all the way back to my teenage years in the early 1980s.

That photo above is me, aged 17, with my Dad and the car from the story. The story actually ran in the August 16, 2001 Flyer, and in this case I am also going to share the text here.

Read along, then, as a couple of dumbass kids in Dad’s too-fast car almost crash and/or get murdered while driving to a football game in Alabama ….

Years ago, when I had more brain cells but used them less often, I was on my way to a football game in Alabama. My friend Walker had season tickets to Crimson Tide games, and since I was an Ole Miss fan and this was the 1980s, I had to go with Walker to see real football. So my dad loaned us his fancy sports car — he must have been giving his brain cells a break as well — and off we went.

Things started out just grand. We left early on a lovely fall Saturday and ripped down I-55 to Winona. We just might have exceeded the speed limit during that stretch, but hey, we were teenagers and the car was Dad’s. We headed east on U.S. 82, through towns with wonderful names: Sibleyton, Tommolen, Eupora, and Mayhew.

Walker and I, city kids that we were, commented on the fact that as the towns got smaller the people seemed to get friendlier. The drivers of pickups going the opposite direction would offer a sort of Alabama Salute: two fingers casually raised from the top of the steering wheel. This was so prevalent that we started to think people who didn’t do it were assholes.

So we crossed into Alabama, went through Coal Fire, and saw signs telling us we were approaching Reform. I never did figure out how Reform got that name. When I searched for it on the Internet recently, all I could find was stuff about the Reform Party of Alabama, and I don’t think I can handle reading that.

The road got curvy just before Reform, and on one of these curves I saw a big red pickup coming the other way, cutting the corner by driving on our side of the road. I assumed, since he was a small-town nice guy, that he would soon get back on his side. He did, of course, but in my estimation he didn’t do it soon enough. So, in my teenage brilliance, I gave him a sort of Tennessee Salute, showing him two fingers of my own — one from each hand — well above the steering wheel.

“Actually,” Walker said, giving a preview of his grown-up voice, “he’s turning around.”

When true fear enters your brain, most other things leave, beginning with rationale and logic. Consider, as proof, what I said to Walker: “Well, maybe he realized he forgot something. Or maybe he missed his turn.”

Walker looked back and said, “Paul he’s gaining on us!” I floored it, and we boomed toward Reform.

Two suburban Memphis teenagers in Daddy’s BMW, heading for an Alabama town of 2,000 or so at, say, 80 mph, with an angry local hothead on their heels in a big red pickup. Any chance a police officer might notice this scene?

Again, the lack of logic: I said to Walker, “Look, if we get pulled over, we’ll just say some guy was chasing us.” Armed with this self-assurance, I sped up. Somewhere along the way I noticed a sign reading, “Speed Limit 35 mph” — tough to read, since it went by pretty fast.

I saw a right turn approaching, and my adrenaline told me, “No way can a truck handle a turn like this” as I locked up the brakes, slammed it into second, and took the turn at about 40. To my father, who will probably read this, I’d like to take this moment to apologize. To my mom, I’d like to assure you that the 1986 Toyota pickup I now drive is incapable of this type of behavior. Same for me, I’d like to think.

I approached 80 mph on this little side street, and as I readied for another lock-’em-up turn, I looked back and saw the pickup making the right I had just made. Just after Walker said, “Um, Paul ” I pinned him against the passenger door with a left turn at … well, let’s say 30.

There was another right, and a left, and a hill or two, and some wide-eyed kids in yards, and — praise the Travel Gods — nary a cop. Without question, we did a lot more driving than was necessary. The guy was probably just messing with us, anyway. But I ceased to care about the truck and began to care deeply about the car. I had awakened something in that BMW. Again, Dad, I’m sorry, but coming out of turns, it seemed to accelerate on its own. I’m sure you understand. I liked the sound it made as we hit 40 in second gear, then 60-something in third. On the straights, there was this magical hum coming from under the hood. I felt strangely calm. Walker was strangely quiet. The houses went whizzing by.

Suddenly, a stop sign appeared — probably not the first one, just the first one I’d noticed — and a sign there read, “Tuscaloosa 30 miles.” With a skid and a whoop, we were back on U.S. 82, with no sign of the big red pickup. We had to run only one light to get out of town, and then I just let the beast run. I vaguely remember passing a van at 110 mph, with some vehicle or another coming the other way, and Walker uttering a “fuckin’ Jesus God damn!” which, alone, is probably a felony in Reform. After that, it was all open road.

I can’t seem to remember who won that football game. I don’t even know who Alabama was playing. All I know is that I lived to see it, and I lived hard and fast on the way there.