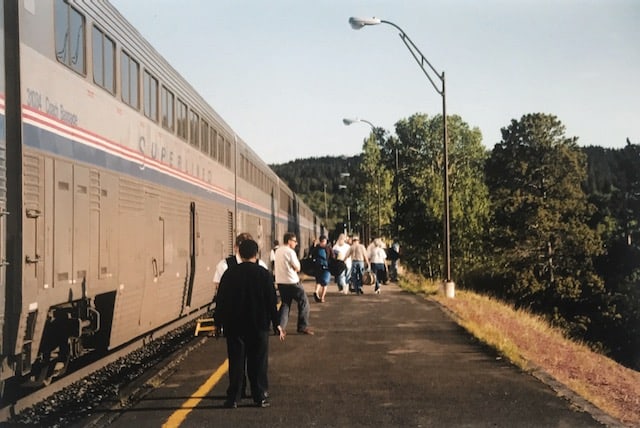 A friendly Amtrak trip through the beautiful heart of America, from Chicago to the sea.

(Note: This story originally ran in the July 2, 1998, issue of the Memphis Flyer. The actual trip occurred in April of that year, when I was traveling from Memphis home to Oregon by way of a travel-writer junket in Montana. Amtrak paid for my ticket from Chicago to Whitefish; being a travel writer is not a bad gig.)

Over a dinner of baked halibut and chardonnay, served at 90 miles an hour in the wheat country of western Montana, people from California, Minnesota, North Dakota, and Tennessee are talking of life.

The Californian says El Niño will destroy the orange crop, the Minnesotan says only the unions can save the railroads, the North Dakotan says he’s going home for the first time since the “flood of the millennium,” and the Tennesseean is glad to be escaping the Southern heat. Out the windows, the wheat stretches to every horizon except the west, where the Rocky Mountains are just beginning to loom.

We’re a traveling community, here on Amtrak’s Empire Builder, running for almost two days from Chicago to the Pacific Northwest. We share experiences, like everyone’s encounter with the drunk guy who wobbled through the train wanting to buy us all beers. Eventually, he wouldn’t leave the young Amish women alone, and the last we saw him he had been left, unhappily, on the platform in Peawaukie, Wisconsin.

We had all looked out the windows as the urban tangle of downtown Chicago gave way to the affluent northern suburbs, where good-looking girls in sorority sweatshirts rollerbladed under old-timey lampposts and families sat together on boardwalks, their cane fishing poles hanging over the placid ponds. There, as everywhere along the route, people stop to wave at the train, a connection to the outside, moving world. We always wave back.

Like any community, we have our cheerful folks and our grumps. One guy looked out at the marshlands of North Dakota, where the air is filled with birds, and everything is lush and green, and puffy white clouds hang in a deep-blue sky, and said, “Ahh, none of this shit is even worth looking at.” But there was also the family of Wisconsiners who posed for a picture with the conductor when they got off the train. The little girl was one big smile when she got to put his cap on.

There’s a guy from Maine, going west of Pittsburgh for the first time in his life, and spending every daylight hour in the observation car. He is practically holding court in there, and so far he’s matched everyone coming through, story for story. A father and son, back on the sleeper car, greet a stranger who was lured by their Walkman cranking out a Grateful Dead bootleg. They’re on a circular tour of America, from home in Sacramento down to L.A., all the way across to Miami, up to Boston, now west to Oregon, and home in a few days. They offer marijuana brownies and cold Labatts beer from their cooler, and the scenery gets just a little nicer.

The dining partner from North Dakota is saying that the river in his hometown of Grand Forks was predicted to hit 47 feet, “but then it went to 48, then 50. Then it started coming up through my pipes. By the time it hit 54 feet I was staying at the Air Force base with two pieces of luggage, sleeping on a cot. Eventually, I had to go to Minnesota, stay with friends and work on their farm. I haven’t seen my house in five months. I hear it’s still there, anyway.”

Now the train is just plain galloping, eating up the miles on some of the best track in the West. The union man from Minnesota, himself a train engineer headed for a meeting in Spokane, says these tracks are laid down in quarter-mile sections, then sanded down to cover the joints. The train might as well be hovering. Back east, in places, it rolls and sways and clangs through switches, and walking from car to car can be a funhouse adventure.

This is the original Great Northern Railroad we’re on here, about 40 miles south of the Canadian line. The railroad built luxury hotels in an effort to attract European tourists. The Isaak Walton Inn in Glacier National Park is one; the Empire Builder stops right at their front door. Lake McDonald Lodge sits on a glaciated lake, peaks all around, and has cabins stretched along the lakeside. The Glacier Park Lodge, in East Glacier, is known for its four-stories-tall lobby. The trunks of four Douglas firs, their bark intact, stretch from floor to ceiling.

Most of the towns along the way were founded by the railroad as it was built in the late 19th century, and a lot of the old stations are still there. The one in Whitefish, Montana, where you can step off for a refreshing lungful of high-mountain air, was built in 1927. Rugby, North Dakota – specifically, a spot out in front of the Conoco station on U.S. 2 – is the geographical center of North America. Malta, Montana, is where the eastbound and westbound Empire Builders pass each other. It happens too quickly for us to wave at each other. “Have fun in Chicago,” somebody had yelled.

Fort Peck Dam is 4 miles long, the world’s second-largest earthen dam, and holds back a lake with 1,600 miles of coastline, more than all of California. Havre, Montana, is named for the French port Le Havre, but its pronunciation is explained in a local legend, told on a hand-carved wooden sign at the station: It seems two fur trappers were fighting over a squaw when one of them, not intending to kill or be killed over a woman, relented and said, “Ah, you can have-er!”

After dinner it’s back to the observation car, where the guy from Maine is telling a black-bear story and the father-son Deadheads are talking to the Amish girls. All four of them are smiling. Some older folks are comparing notes on other trains. The steel mills of Gary, Indiana, from the Lakeshore Limited. The run down the coast on the California Zephyr. What a nice trip the Pioneer used to be, from Denver to Portland, before it got “discontinued.” The lounge-car attendant announces “last call,” and some of the younger crowd go down for a final couple of beers.

Every seat is taken now, and the Rockies are all around us: steep peaks out the right side, a deep valley out the left, stars coming out above us. Somebody says that on a winter run through here they saw two wolves standing on a hillside. Deer are common along the tracks, and have been since Wisconsin. The south fork of the Flathead River is winding along with us. There’s a salt lick along the way where you might see 30 or 40 mountain goats at once. People are making notes, reading books, taking pictures, and pressing their faces to the windows as the last light fades and the mountains retire for the night. Everybody getting off in Glacier Park goes to their seats to pack up. Home Alone 3 comes on the screen, turned up too loud, and we flee the noise and stupidity of it.

Last night, when we stopped in Minneapolis around 2 in the morning, a lot of us got out and walked the length of the train. It’s a long silver spear, aimed west. The engines, even when they’re idling, rumble away all other sounds. Brakes releasing steam always startle you. The engineers, relieved of duty after driving from Chicago, are laughing and slapping each other on the back – but in 30 seconds of overheard conversation, they use a half-dozen different cuss words. They might as well be sailors.

Back on board to get some sleep. You can throw down some fairly serious money and get a sleeper car. Even the economy sleepers – two seats facing each other that fold into tight-fit bunk beds – will add triple digits to your fare, although they do let you lie down for the night, and the fare includes all meals. The bigger ones might be worth it if the kids are along, but for all intents and purposes coach is just fine. The seats in coach are wide and cushy with pop-up leg rests, and if everybody cranks their seats all the way back, nobody loses leg room. Besides, you can see out both sides of the train, and there are people to talk to. Riding the train, after all, is about seeing the country and talking to folks along the way.

At first light, it’s back up to the observation car for the run down the Columbia River Gorge into Portland. In Spokane, which you cruise through about two stories off the ground at 2 or 3 in the morning, the train splits, and half of our little town goes to Seattle. The rest of us fight for space and try to decide which side to sit on: the right for the cliffs, waterfalls, and moss growing on the high rocks, or the left for the views of the West’s greatest river flowing through a 2,000-foot gorge. There is much hopping back and forth and many shouts of “Honey, look,” especially when you round the bend above Hood River, Oregon, and snow-clad Mount Hood looms up the valley.

You sip your coffee, turn your head constantly, and let your notes descend into phrases: “windsurfers frolic on six-foot waves … Multnomah Falls over 600 feet high … an Oregonian rejoices, ‘It’s not raining!’ … couple says they’re riding their bikes back to Maryland … Lewis and Clark paddled by here … have come across the plains, over the mountains, and now down the river, into the city … what a beautiful country.”

It sure is. And riding the train is a beautiful way to see it.