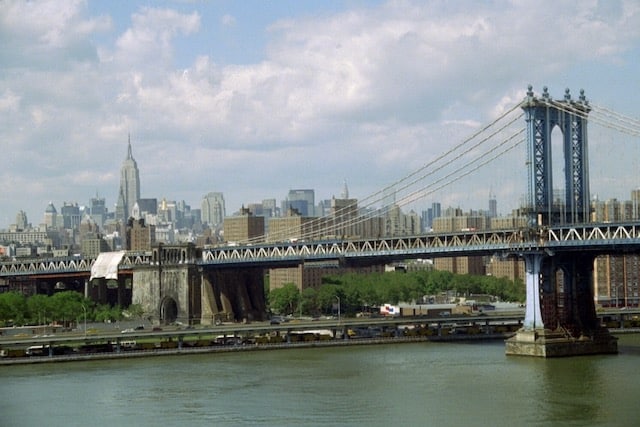 On February 2, 1998, I rode a bus into New York City, then left on a train. I was 31, rambling around the east coast visiting friends, spending money I had made the previous summer working in Alaska.

And I was writing.

I was writing all the time in those days, with my laptop on top of a newspaper machine in a bus station, or curled up on a friend’s couch, or in a diner, or, in this case, on an Amtrak train, trying to catch up in my journal on a day that had started on Cape Cod. Whatever I may have thought at the time, those were good times in my life.

I wrote some 2,000 words on the train that day, and about a year later, facing my bi-weekly travel story deadline for the Memphis Flyer, I mined that entry for this piece on what The City looked like out those bus windows, now more than 23 years ago.

Two Hours in the City

This story first appeared in the Memphis Flyer on December 2, 1999. It was republished in the Weekly Wire on December 7, 1999.

The first sign that we’re leaving the countryside is a massive apartment building with a quarter of its windows boarded up. It might as well have a sign that says, “Now entering The City.”

Until now, the bus has rolled pleasantly enough through the surprisingly pretty Connecticut wetlands. From Mystic to New Haven, between the mouths of the Thames and Connecticut Rivers, there are lakes and streams and inlets from the coast and tree-covered islands. Some of the water along the edges is frozen, which makes it look that much prettier.

After New Haven, it’s all smokestacks, trash bails, rusty sheds and equipment, abandoned factories … it looks like something terrible happened.

Suddenly we’re exiting the expressway, taking a left on 5th Avenue, and plunging into Urban America. The signs say Harlem. Did we just see The Apollo up that street? Left on Frederick Douglass Boulevard, buildings empty and burned-out. An Ethiopian grocery, St. Stephen’s AME Church.

Right on “Cathedral Parkway,” Giovanni’s on the left, a whole new world. Morningside Park to our right, cathedral on the hill beyond, looming and fancy. Left on Columbus, now some Spanish in the signs. Between all other languages is Chinese. Neighborhood getting a little nicer, all windows intact. Business suits at bus stops. Starbucks, down quilts, antiques, Penny Whistle Toys, Barnes and Noble. Signs for NY Philarmonic and a coat-and-tie guy in the street with an instrument in a case.

A quick view of Central Park, apartment buildings so tall and narrow you wonder how they stand, a Tuscany Ristorante — got to be money here — and a horse-drawn buggy full of tourists. Now left into a garage, buses everywhere, exhaust fumes, into the abyss of the Port Authority Bus Terminal.

Even New Yorkers cringe at those words. Four hundred and twenty-five bus gates. Our driver says “Welcome to New York City, don’t speak to any of these people waiting for the bus.” We’ve got a train to catch in two hours, and Penn Station is just six blocks away.

Four in the afternoon, the streets of Manhattan. The smell of human urine greets us right outside the door. Honking cars, swarms of people crossing streets, people of every kind. Walking upstream, we stay close to the storefronts, like the wall of a skating rink, or follow somebody big. Otherwise, we’re forced to weave. The people are like a flood with push-cart debris. A pizza place has a Chinese staff; Hispanics run a Chinese place.

So many cabs! A guy’s raising hell drumming on plastic buckets — one with a towel over it so it’s the bass — pieces of pipe, garbage can lids, a desk lamp for a high-hat. We turn onto 7th Avenue, “Fashion Avenue,” where Macy’s covers a whole block. Let’s go look up the Empire State Building. Don’t gawk too much, you’ll look like a sucker-tourist, big backpack and mouth open looking up at buildings.

So many faces — I must know somebody here. I bet everybody has a doppleganger in New York City. We see 50 familiar faces in three blocks. Stand still and let them flow by. Charles Kuralt saw the whole world in one neighborhood here. Pretty girls, moving fast, carrying large bags, making no eye contact, looking like they don’t give a shit and would eat you alive. In this town, they probably need to look that way. A Rastafarian hawks electronics in a doorway.

Into sweltering Penn Station, which is under Madison Square Garden. Departure screen in the station says 15 Amtrak departures in the next 40 minutes. The pay phones have sideguards on the dial pad, so people won’t steal your credit card numbers.

This track for Chicago? Wa-hoo! We pump our fists and high-five. On the road again! Jump on board, grab a couple of comfy seats, and there’s no more buses, baby! The slightest movement, barely saw it, and at 6:34 p.m. the Lake Shore Limited is underway.

Mostly, as we leave The City, we’re underground, but there are occasional glimpses of city lights and bridges and the Hudson River. We’ll go up to the dining car after a while and have grilled catfish with Chardonnay, salad, and cheescake, and listen to a veteran train traveler tell us of his several trips to New Orleans. We’ll finally start to settle down, compare notes on our two hours in The City, and know that when the sun comes up tomorrow we’ll sip coffee somewhere in Ohio and be in the Windy City for lunch.