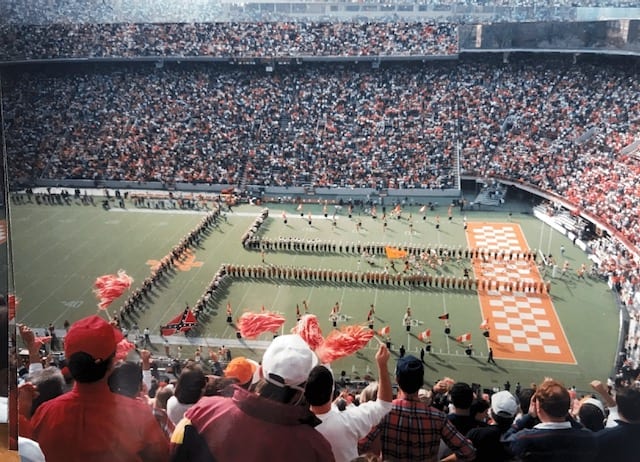 It’s funny to come across an old memory and recognize it as some kind of foreshadowing.

In 1991, I went to a football game at the University of Tennessee. The night before, in my hostel, I met an English fellow. I invited him to the game, then served as his Southern Culture Host for the day. The result, below,  is one of my favorite of 250-something travel stories I wrote for the Memphis Flyer between 1996 and 2012.

So what’s the foreshadowing? About 25 years after that game in Knoxville, I started an “English football” company and have now gone, as of this writing, to more than 100 of their games at more than 60 of their stadiums. Check out Groundhopper Soccer Guides for more on that. To relive our day at Neyland Stadium, read on.

And the first person to identify the clear error I made in writing this story, something which for all intents and purposes could not have happened, will get a free signed book from me. Just post it in a comment below.

On the Orange Side

A visitor gets a perspective on Southern culture.

It was October a few years back, and the ground in the Smoky Mountains was covered with orange and gold leaves. I was staying in a little hostel somewhere near Gatlinburg.

There was only one other person in the hostel that night, an Englishman named Neal who said he was on a quest for Southern culture. He had flown into New York and immediately caught a bus south, stopped in Virginia for a while but found it stuffy, then came to the Smokies and found them better but still not what he was after.

He told me of his trip over a dinner of pasta mix and canned tuna, washed down with ginger ale, which was new to him. He kept calling it ginger beer.

He said what he really wanted was to see where the blues came from. He was on his way to Memphis and then to Mississippi and New Orleans. He wanted to see Beale Street and the Delta and Bourbon Street, and he had taken three weeks off from his library job in some shire back home. These English, I thought to myself, sure have a thing for the blues.

It was a Friday evening, and we talked into the night when it occurred to me that my reason for being in Gatlinburg was, in a sense, the same as his. I had taken a couple of days to tool around the Smokies, but my original quest was to see the Ole Miss vs. Tennessee football game the next day. After the idea fused in my head, I said to him, “You want a real dose of Southern culture?” He said yes, and I said, “Well, then, tomorrow we’ll go to a University of Tennessee football game.”

And just like that I became a guide to the culture of the South.

First he wanted to know “which kind of football” we’re talking about, because he assumed it wasn’t the World Cup kind. “No,” I said, “it’s bigger than that; it’s the Southeastern Conference.” Next he wanted to know why the collegiate game was such a big deal. “They’re all 20-year-olds,” he said. “Right?” I confessed I had never asked myself that question, and when I did, I had no answer.

I just explained to him that it would be fun because he could see 96,000 drunk rednecks, but then he wanted to know what a redneck was. I explained the etymology of the term, and he said, “I didn’t realize the society here was still so agricultural.” I decided we should switch from “ale” to actual beer to loosen this guy up.

We rolled into Knoxville the next morning amid an orange army, and the questions from Neal came in volleys: “What are those paper things on sticks they’re all holding?” “What’s the fascination with eating in public?” “Are the students required to wear neckties?” The trickiest, of course, was “What’s that flag the Mississippi supporters are waving?”

We stopped to admire a very standard R&B outfit playing very standard songs — “Mustang Sally” and whatnot — and Neal commented that their style was indicative of the Southern blend of blues, country, and rock that he so admires. “The guitarist, especially, is quite talented,” he said.

We took our seats in the top row of Neyland Stadium — if you’ve never been up there, imagine watching football from an airplane — and I, with help from some of our neighbors, set about explaining “American football” to Neal. First I explained that since we’re inAmerica, it’s just football. Then I expounded on first downs and penalties, touchdowns and extra points, field goals and kickoffs, even demonstrated some of the basic referee signals. I touched briefly on the history of the rivalry, on the significance of today’s game, worked in some details about recruiting and money, then got into the fundamentals of blocking and tackling. It was a Football Talk for the ages.

And then, on the first play of the game, Tennessee blocked a punt out of the end zone for a safety. Orange-clad behemoths ran around with their hands together over their heads, and the scoreboard read, “2-0.” My talk for the ages had not included such details as punts, blocks, or safeties. Our neighbors abandoned me, and I was left alone to explain how a team scores two points without actually getting the ball.

As most Ole Miss games against Tennessee are, this one was “all Vols.” I think it wound up as a 30-point victory, during which Neal commented, “The orange side are clearly superior.” I thanked him for his input and tried to explain the significance of “next year.”

I wasn’t in Memphis when Neal went through a few days later, but I got a couple postcards from him later that fall. He was surprised that Beale Street was “so commercialized,” and he seemed genuinely surprised that the Mississippi Delta was, so long after the Civil Rights Act, “still so poor.” He loved New Orleans, of course.

I wrote back and told him I admired his quest, and perhaps one day he could take me to an “English football” game. Anybody who can have fun in the Ole Miss section at Neyland Stadium is a friend of mine.