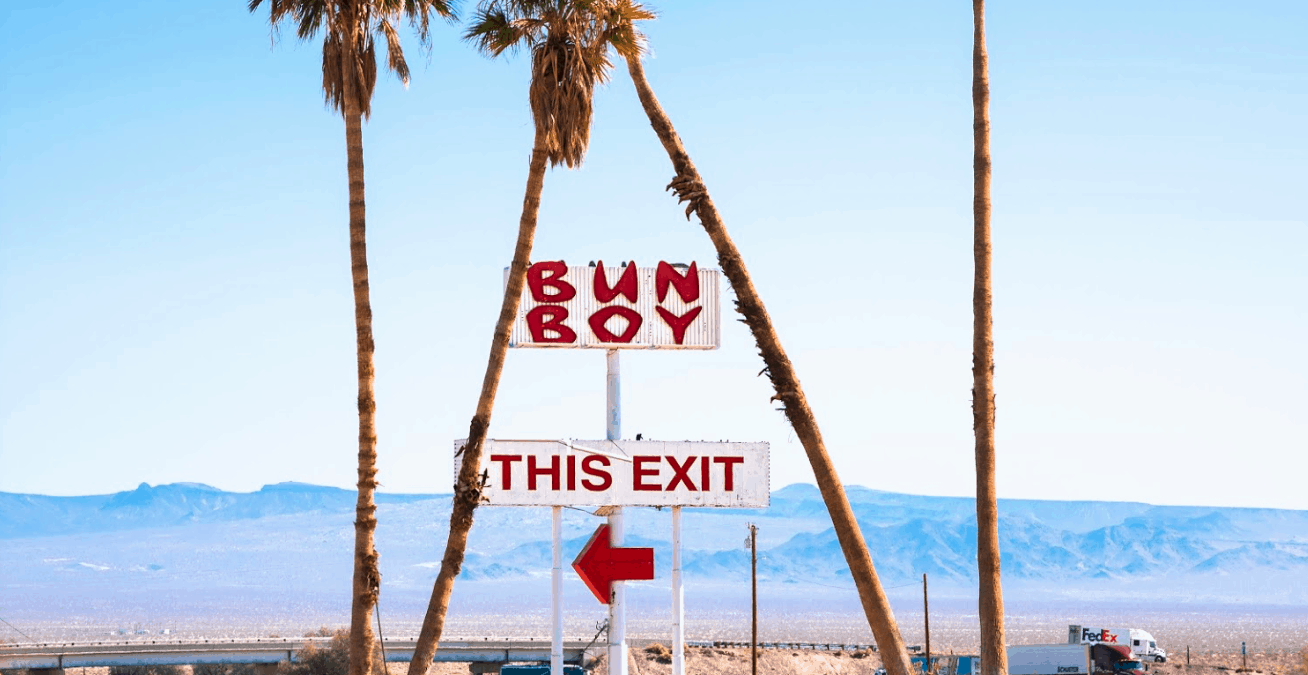 When I think back on my travel writer days, my breakfast in Baker, California always rises to the top.

It was just one of those pieces I felt good about at the time, like I had really gotten the essence of the experience and the place. And it was, for all its goofiness, a pleasant memory, road-tripping around the desert with my first serious girlfriend.

It was also a piece which served as one of the foundation stones in what became a mini-career for me: writing about places by describing eating breakfast there. I wrote a few other pieces like it, then the idea occurred to me that I could turn the idea into a book about Portland; thus was born Breakfast in Bridgetown.

And it all started on a slightly hungover January 2, 2000, at the Bun Boy in Baker.

Waffles, ice cream, and a real big thermometer: on the road with the Vegas refugees.

It was probably a typical morning at the Bun Boy.

The crowd ranged from the trucker who knew every waitress by name to the skull-capped crew whose thumping bass had rattled our cups and saucers when they rolled into the parking lot. There was a non-English-speaking family of about 15, apparently from Southeast Asia, and two high-heeled 50-ish women in designer sweats and the worst wigs ever worn. There were bodybuilders in wraparound shades, ranchers, drifters asleep in booths, a bleary-eyed Middle Easterner with gold necklaces, and a wandering writer with his girlfriend looking over a map of California.

We all had one thing in common: We were Vegas refugees. And from the look of things in the Bun Boy that morning, it had been a rough night in Sin City.

Baker, California — home of the Original Bun Boy Restaurant and the self-proclaimed “Gateway to Death Valley” — is a place that probably occupies a foggy corner of many minds. “Man, where was that place we stopped at like 4 in the morning on the way out of Vegas, where Ronnie got that Strawberry Waffle Sundae and then puked in the parking lot?” It was probably Baker, a town whose Web site entices the desert traveler with “convenience stores, gas stations, garages, and towing services.”

In other words, it’s a shithole town on the way someplace, or out of someplace. But it happens to be just about sober-up distance on the way west out of Las Vegas or perhaps crank-it-up distance east of L.A. Its proximity to those Pits of Despair means that at any given time somebody weird is in town — a lot of them on weekends.

I mean, consider this nugget from the Web site: “We have a 3,000-ft. lighted runway at the edge of town!” And who would be using that? Like the crowd on I-15 isn’t goofy and/or drunk enough — more could drop in at any time, night or day!

We had stopped in Baker because, well, it’s the only damn place out there. Besides, I was intrigued by a sign that read, “Arne’s Royal Hawaiian Hotel — Cable TV … Pool … Thermometer View.” It turns out Baker is also the home of the world’s tallest thermometer, which can only make you feel bad for whichever shithole town had the previous world’s tallest thermometer. Baker’s behemoth is 134 feet high, in memory of the highest temperature ever recorded in the U.S.: 134 degrees at Death Valley in 1913. That, of course, was pre-Bun Boy, and pre-Vegas, for that matter, when the desert was nearly empty and better.

Looking at this huge thermometer through the windows of the Bun Boy, which had condensation on them from the air conditioning, I thought of something a friend once told me about Los Angeles: “If God was gonna give the world an enema, the tube would go in at L.A.” And now, I thought, God would have a proper instrument to take Earth’s temperature.

Right next door to the Original Bun Boy, a name which raises the possibility that there might be more of them somewhere, is “the luckiest lotto dealer in California,” a country store that claims to have sold winning tickets totaling $41 million. It makes you wonder how much money has been spent there on tickets, doesn’t it? I can attest to $10 that didn’t result in millions. It’s like your last chance at luck after Vegas, or maybe your first testing of the waters on your way there. I don’t think anybody in the Bun Boy that morning was a winner.

Right across the road from the Bun Boy is “The World Famous Mad Greek Cafe.” Shouldn’t we reserve the phrase “World Famous” for places like the Louvre and Graceland? The Mad Greek is a burger/ice cream/espresso joint that also serves gyros and strives, according to its sign, “to give a medival [sic] flavor to the California desert.”

Back in the Bun Boy, I was strongly tempted by this Strawberry Waffle Sundae, “where cool and creamy meets hot and crispy,” according to the menu. The Bun Boy, I’d like to point out, is a place where fish and chips are listed on the menu as “on the diet side.”

Instead I got eggs and sausage, then couldn’t find either one under the six largest pieces of toast ever assembled on a plate. I’m pretty sure I had an entire loaf on there.

I looked around at the rest of the Vegas refugees. “Where cool and creamy meets hot and crispy,” eh? It looked more like where harried and hungover met sweet and sour. I turned to my girlfriend and said what so many have probably said before, on many bleary Bun Boy mornings just like this one, only hotter: “Let’s eat and get the hell back on the road.”