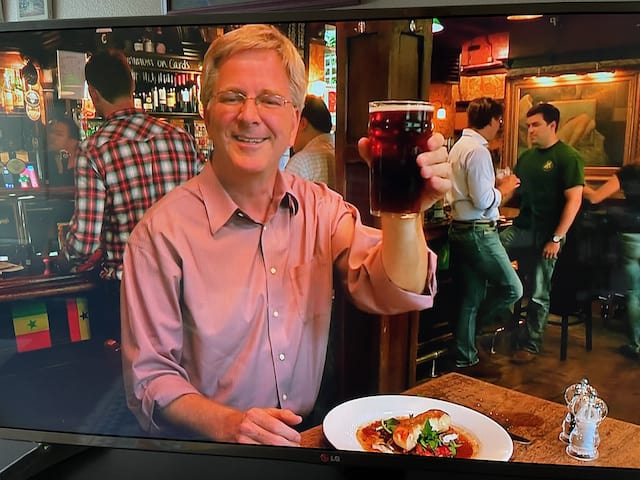 There are very few people who always make me happy. Rick Steves is absolutely one of them. He’s also something a guru to me.

There’s just something impossibly endearing about a guy who is an absolute goofball and makes no attempt to either hide it or change. “In my early days of touring,” he has said, “I used to worry about being a cultural bumpkin — but now I embrace it. After all, I travel to learn.”

“Don’t be afraid to be a bumpkin” has become one of my mantras, along with another thing he often espouses: “Be a temporary local.” It’s what I was doing when I stumbled into the latest version of my “career,” helping people go to soccer games in England. A London friend took me to a game, and I learned the value of understanding the local traditions and songs and knowing something about the clubs I was seeing, then using all of that to connect with the people around me.

But even that feels too serious, especially when I’ve just watched a couple of Rick Steves TV shows in which he is constantly smiling and winking and saying cheeseball things that make me actually slap my knee and cackle. He’s like our goofy uncle who apparently never has a bad day. Or, I would assume, if he does have a bad day, he just starts it over and tries to do better.

He also doesn’t seem to bother learning any languages, even after spending 30 years traveling around Europe — something which could be seen as arrogant, but he just shrugs, says he’s not proud of it, then learns a few phrases in a terrible American accent, takes it all in, smiles, acts the goofy bumpkin, and “keeps on travelin’.”

“Rick Steves’ Europe,” as it’s presented throughout his large and thoroughly branded universe, is a cheerful place where the weather is nice, the luggage is light, the locals are welcoming, and the food is gosh-darn excellent. The fact that they call it “Rick Steves’ Europe” seems to imply that it isn’t the actual, real Europe the rest of us have to visit, a place where one can get tired, grumpy, lonely and ripped off. I mean, he mentions those things, and he is always traveling alone, so he seems aware these things can happen, but the man is always smiling when he talks about them!

I get through watching his shows, and I just want to jump up, pack my stuff, and hit the damn road. And I am about to do that, in a very big way, so the occasional Rick Steves Pep Talk is very good medicine for me. When I arrive in Europe later this year, it will be winter, and I’ll be working, and I’ll be worried about money and business decisions and how long I can stay on my tourist visa, and this and that and the other thing. So I need to be reminded that it’s also gonna be just swell! I will meet people in my charming pensione, I’ll watch the sun set over some Grecian sea, I’ll take a fabulous walking tour of some medieval German village, and heck, I might even meet some beautiful Spanish senorita and never come home!

So yes, goofy as he is, Rick Steves, for his eternal optimism and open-mindedness and assumption that basically the world is pretty darn cool and worth exploring, is a role model for me. I need a Happy Healer sometimes, because my mind and heart lean toward the darkness. I look at my impending travels in the UK and Europe and see, yes, some excitement, but also all the various things that can go wrong, or mistakes that I am probably making right now, before I’ve even left home.

But he’s a professional role model, as well: my Goofball Guru. Years ago, when I was the travel writer for the Memphis Flyer, I had a chance to interview him. And even that experience was a “gosh-golly” kind of thing. He was going on a tour of the US to promote public television, and his itinerary included Memphis. So I reached out to his media person to do what we call “an advance piece” (which you can read here.)  I’ve interviewed plenty of famous people in my time, and what usually comes back from the media person is something like “Be at your phone at 10 am Tuesday, I’ll call you, and you’ll have 15 minutes.” But Rick Steves’ media person gave me Rick’s cell phone number and said, “Tuesday morning should be good.”

I called him on that Tuesday morning, and we chatted for, well, I don’t recall how long. More than enough for the article, without a doubt. Eventually the talk turned to his career, which started with teaching “smart travel” at a Seattle college, then moved on to a guidebook that included the famous phrase, “Anyone caught reprinting any material herein for any purpose whatsoever will be thanked profusely.” He led tours with little or no itinerary, started doing a TV show, and went on from there — to build a company with more than $100 million in annual revenue.

I asked him about running that company, and whether he missed the simpler old days. And he answered emphatically: “Oh, I don’t run the company. I own it, and my name is all over it, but I have a team of people who run it, and we all just do our jobs.”

And what, I asked, is his job?

“All I do,” he said, in words that basically form my ideal career situation to this day, “is write guidebooks, produce television and draw crowds.”

Three things. That’s what Rick Steves does. And spend, as the credits on his radio show always remind us, “One-third of his adult life in Europe.”

Now, I have learned since launching my own company, and hiring people, that he left out a few other things he does: make decisions, spend money, and worry. Still, even as I work with something like (starting up the calculator) 1/300th of his revenue, I have a goal I got straight from him: build a company which is mission-driven and lets me do three things that I enjoy doing. In my case those things would be go to soccer games, connect with people, and tell stories about it. That’s all I really want to do. And go for a hike here and there.

But he also taught me to keep an eye on the bigger issue: It’s not about people going to Europe (or soccer games) and having fun. It’s about people connecting with each other and learning about the world around them. As he said in our interview, “A lot of people are not encouraged by the world they live in to get out of their comfort zones. The free spirits who do are so thankful, and their whole existence becomes carbonated with the experience of being the odd one and seeing that different people have different dreams.”

This has led Steves to some very political places, like advocating for legal marijuana, because hey, maybe the rest of the world’s population has learned some things we might find useful. For me it leads to encouraging people to, after they have fulfilled their lifelong dream of going to a game at Liverpool, take a ferry across the River Mersey to go see a game at Tranmere Rovers, listen for the “Rockford Files” theme song over the loudspeaker before the game, then turn to the person next to them, ask what’s that the folks behind the goal are singing, and ask if he went with the boys to Wembley back in 1990.

You know what will happen then? A real connection with a real person through the world’s great international language, football. You’ll realize that every football ground in the world is a treasure trove of human stories, and your neighbor will find out that not all Americans are ignorant jerks. Or, to set aside my analytical mind for a moment, you’ll have a gosh-darn knee-slappin’ good time, and you just might come away not only with a new song to sing, but a new outlook on life and the people you share it with. And hey, maybe a friend.

And then what? Why, Keep on travelin’, of course! And I’ll see you at the grounds.

Last reply was 7 months ago