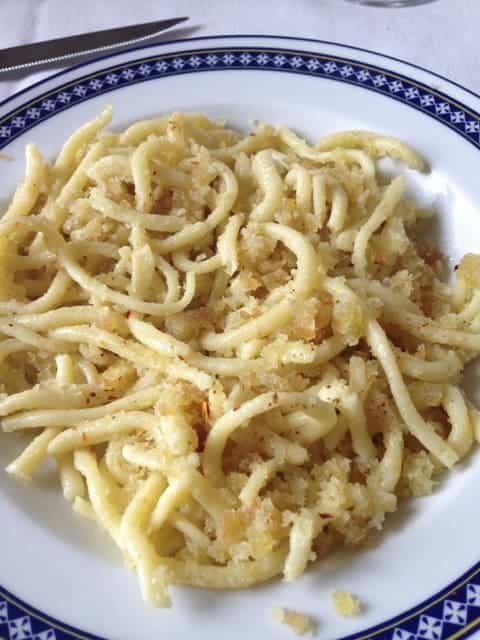 Every year, I lead hiking and touring trips to Italy, and since this is Italy we’re talking about, one of the highlights is the food. I think Italians have the best cuisine in the world.

The thing about Italian cooking, the way we eat it on our trip, is that it’s rarely fancy. It’s not covered in elaborate sauces, and it doesn’t have long titles with a huge list of spices. You just get good, fresh ingredients, cook them right, and serve them with love and community. As the trip leader, I live for the looks on people’s faces when they sink their teeth into something like this:

So, following up on Part I (Setting and Antipasta), let’s move on to the second and third courses of my Ultimate Italian Meal: pasta and meat. In Italy, by the way, the salad often comes out last, and sometimes vegetables don’t even come with the meat course. They like to say that you put the light food on top of the heavy.

Want to go hiking and touring in Italy with me this year?

Check out the 2015 Italy Trip Page

Or just send me an email

Okay, let’s talk about pasta. On one trip we visited the home of a shepherd family, on the edge of a national forest reserve, and she made pasta for us. It’s a local specialty called tortelli, which looks to us like ravioli but is filled with mashed potatoes and a few spices, rather than spinach and ricotta cheese.

But the best thing was, we got back from a walk in the forest to a 1,000-year-old monastery, where St. Anthony himself once stayed, and we got to watch her make it!

When I asked this woman what she was going to put onto them, she looked at me kind of funny, as if to say, “What do you think they need?” Then she pointed at this pot and said …

And the final result, with a little parmesan cheese on top. It makes me nearly weep every time I’ve eaten it.

In other pasta adventures during the trip …

Sometimes, we might have a soup instead of pasta. It could be one of these options:

And now, on to the meats. The meat course isn’t always such a big part of Italian cooking, but it’s there. The trick with these meals is to go easy on the bread, antipasta and pasta — which, believe me, is much easier said than done!

Well, I think we’ve had enough to eat for now, don’t you? Next time I’ll come back at you with the side dishes, salads, and of course, dessert. And espresso.

Until then, let me know if you want to go hiking and touring in Tuscany with me. It’s an awesome trip, with awesome food!