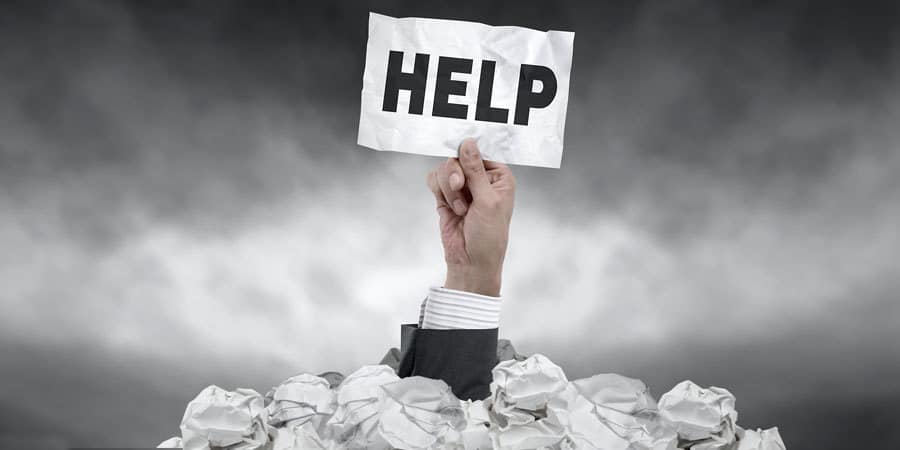 There’s a pretty standard part of every recovery story, and it’s certainly a part of mine: that time when you hit bottom, realize you’re screwed, and then finally become ready to seek help.

What happened to me was that I had built up a serious belief system in my head; the main message was, “This isn’t really a problem, and even when it seems like one, I’ll figure it out.” That thought, “I’ll figure it out,” kept me drunk and high for a long, long time – because I always believed it was okay to get loaded today because tomorrow I’m gonna figure it all out.

For me, there wasn’t a single, defining “come to Jesus” kind of moment where I realized I was an addict and needed help. In my story, it was just a slugfest between my belief system (“I’ve got this”) and reality. Finally, slowly, and barely, reality won. I realized I was not going to get sober on my own, that I was really done for, and that made me desperate enough to ask for help. In my case, that meant going to a meeting.

So the experience of “hitting bottom” and realizing you don’t “have this” is essential for us addicts to get sober. It’s called Step 1, and it sets us up for Step 2, where we decide to seek help. Having done that, we move on to Step 3, where we commit to trying what is suggested. At least, that’s how I see it, and how I recall it.

Today I’ve been clean and sober for 14 years, all of which flows from that time of realization – but that was a really unpleasant experience! And lately, I’ve had it again – not with substance abuse, but in two other areas: career/money and depression.

The short version of the story, which should sound familiar, is that I always believed I would write for a living and be professionally independent – i.e., not need a job. I never have gotten there, despite a couple decades of trying, but I may have been close a few times.

Nine years ago I quit a job to pursue the dream again, and somewhere along the way it really went off the rails. It’s hard to pinpoint exactly when that happened, or why, but I can say this: At the beginning of 2014, I had a little bit of debt, an almost-successful business, and the belief that it was all about to start getting better. I wouldn’t call that “working,” but I was in denial that it might be anything else. Meanwhile, it wasn’t that I was doing anything different to make things better, I just believed that what I was doing would work – even though it really never had.

My work life had probably been off the rails for a while at that point, but I didn’t realize that … or accept it. But during 2014, a major project failed, two paying gigs dried up, and I made some pretty bad financial decisions, all fueled by compulsive thinking. And somewhere around the summer, I realized I was involved in (creating) a slow-motion train wreck. At the end of 2014, I have a failed business, a ton of debt, and – this should also sound familiar – a realization that I ain’t gonna suddenly figure this thing out on my own. What I have been doing isn’t working, and isn’t going to work. I hit professional and financial bottom in 2014.

Just like hitting bottom with my substance abuse, this was not a pleasant experience. In fact, it has triggered some pretty serious depression – not the jump-off-a-bridge kind, but the “nothing is going to work out” kind, the massive self-doubt kind, in fact the “I’m a loser and a failure” kind.

These thoughts have been with me for a long time, and their ramping up this year has brought me to another realization: I ain’t gonna figure this depression thing out, either. Not on my own, anyway. And this realization has brought me, just like getting sober, to a new level of openness and willingness. I need help, I’ve asked for it, and I am ready to do what’s given me to do.

For me, that means getting into therapy and being open, at least, to the possibility of anti-depressant medications. I’ve worked through some stuff with pills lately in another area of my life, so I’m open to doing it again. Sometimes, as I have realized, pills really might be the answer. In this case, pills with therapy might be the answer, but the point is, I am willing to do both. I have already chosen a therapist, and I am willing to do what she suggests, including taking some meds for a while.

On several levels, I have not enjoyed 2014 very much. My ego took a thrashing this year, which I guess it needed, but some dreams of mine died, as well. Maybe they were delusions, but I was attached to them, and they’ve dissolved. I feel adrift and confused, and I’ve been thinking and behaving compulsively.

I didn’t enjoy the time right before I got into meetings, either, but it led me to a better place. And if I can keep that perspective in mind, and faith in my heart, as I move through this stage of my life, I believe I will get to a better place again. In the midst of all this despair and damage, I sense the sprouting seeds of a new beginning. And it started with me hitting bottom, then being ready to ask for help.