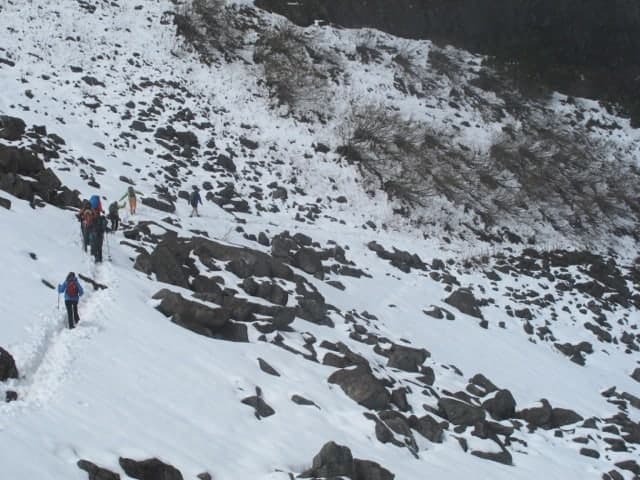 Back in town after a hiking trip in Tuscany, I decided it was time to tackle some Portland hikes, with big trees and waterfalls, even if they lack coffee shops and gelato like over in Italy. And I figured that this low-snow year would be perfect for an early trip to Table Rock Wilderness, out near Molalla. Seems like not many people know about this hike, and it kind of gets lost among the pantheon of Portland hikes. In fact, people often confuse it with Table Mountain, which is a whole different ballgame, a thigh-buster out in the Gorge.

No, Table Rock is a “small pocket wilderness” of just 5,500 acres in the foothills of the Cascades. It’s surrounded by logging country and is actually on BLM land, instead of Mount Hood National Forest. The main trail is 3.6 miles up, gaining about 1,300 feet, and I am told the view stretches from Rainier to Shasta. I say “I am told” because I am now 0-for-3 on seeing that view. In June 2011 I never found the main trail because of snow, then in July 2011 I made it to the top but was socked in by clouds. This time, a hardy group of nine Mazamas made the top, in snow, and was socked in by clouds. So I am mixing it up!

The trail starts from the Table Rock Trailhead, which is about a 90-minute drive from Portland — a somewhat tedious 90-minute drive which you’ll want good directions for. From there, you follow an old road for about a mile and a half, then start up into the woods on a nice trail that climbs steadily through thick forest — and, on May 26 of this year, a couple inches of fairly fresh snow.

As we got higher, the snow got thicker, but it was never hard to walk in. Just kind of slushy.

The first thing of real interest is a big boulder field below an impressive set of basalt cliffs. Apparently, pikas live here in abundance, but on this day we faced pretty deep snow. There were opportunities to post-hole and/or slip on rocks, so this because the “crux” of the day. Nothing hard, but you had to pay attention, and it slowed us down. Sure looks dramatic, though!

After that, it’s an easy set of switchbacks up to the summit, which at 4,881 feet is said to have a fine view. Here are three versions of it. First, from the Field Guide at PortlandHikers.org:

We hunkered down in the trees to get out of the wind, hoovered our lunches, and hit the trail back down. It was two hours up, a little over an hour down, and all in all we were gone from Portland for eight hours.

It’s a nice hike, this Table Rock Wilderness. I am considering it for the 5th Edition of my book, 60 Hikes Within 60 Miles of Portland. But first I need to see if I can catch it on a clear day!