[dropcap]O[/dropcap]ne thing about going to so many breakfasts is that after a while, I start to forget what places are like — or even forget them completely.

For example, it occasionally pops into my head that I had a couple of good brunches at Sckavone’s in Southeast Portland. I sometimes remember to mention it when people ask questions like, “Where should I go in Southeast,” and “What’s a good place with no line?”

But after eating in more than 130 places for my book, Breakfast in Bridgetown, Sckavone’s sometimes drops off my personal radar. So, last weekend, I went back to check it out.

It was half-full at 10 a.m. on a Sunday, the food was excellent, the staff super friendly, and the owner even came by to tell me that none of this is a problem in his world. 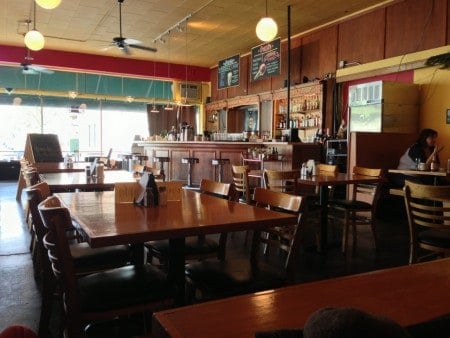 It was a drugstore for years, and is still owned by the same family. The friendly, neighborhood vibe is still there. In fact, the owner came over to say hi and told me they’re not trying to be anything other than a neighborhood restaurant in Portland. He said sure, they like customers, but they’re not trying to be the Next Big Thing. I like that attitude, and I love the feel at Sckavone’s: casual, clean, airy, well lit, and friendly.

And they hand out a scone for everybody:

The menu hits all the classics, with egg dishes and pancakes and granola. When the Crew went with me, we sampled the corned beef hash, which was just right with a little crisp to the meat, and a French toast with cinnamon and cream cheese icing that was more like apple pie, and huge.

This time, I went with the Smoked Salmon Benedict, a classic Portland brunch dish, and it was really, really good. Here are two shots of it.

Here’s what I wrote about the history of the place for the book:

Nick Sckavone came from Italy to Southeast Portland in 1908. He led a labor action against the Oregonian at age 15, and at 17 he formed a club of neighborhood baseball teams, and there’s a field in Westmoreland named for him. In 1930, he opened a drugstore at Southeast 41st and Division, and in 1980 his grandson took it over.

It’s just your basic neighborhood place, and it has been for 80 years. Kind of makes a guy want to move to the neighborhood and sit at that counter all the time.

And by golly, I had the same feeling last weekend, too! Could mean I should be more creative, or that I just eat at too many places. But maybe it just means I should go to Sckavone’s more often.

Or…Buy the breakfast book (plus 60 Hikes Within 60 Miles of Portland and others) here.