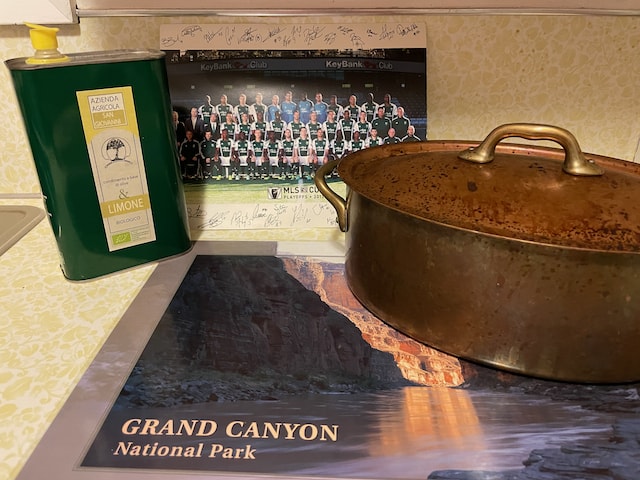 In the 24 years I’ve lived in Portland, I have had 12 different addresses. So I know well the application of The Test. And as I prepare to leave for good (ish), I’m about to start applying it in a very real way.

I don’t mean a test of character, or planning, or searching for a place, or any mental acumen. I mean the test that determines whether I keep a thing or not.

In theory, it’s a simple test with just a few simple questions. You’ve probably applied it yourself. To wit:

Do I use this thing on a regular basis? If yes, it probably stays. If no, it probably goes. See ya, stovetop espresso maker.

Would I be heartbroken if somebody stole this thing? If yes, it stays. If no, it definitely goes. God save the cheesy scenic laminated placemats!

Did I forget I even had this thing? I mean … Why do I have an electric mixer again?

Have I used this thing since the last time I applied The Test? If yes, then we’ll see. If no, it 100% goes. Thanks for you non-service, crockpot. On the other hand …

Did someone give me this thing, and the main reason I still have it, despite not using it, is that I would hate for that person to find out I got rid of it? I mean, if they gave it to me, do they still own it? Would they even find out? (Hmm, do they read this blog?)

Is that person dead? I’m being cold-blooded here, I know, but this matters — unless this thing is the last thing I have that came from that person, in which case of course it stays. So Dad’s painting from Switzerland stays. But his history books that I probably won’t read? I mean he gave most of his away ….

What if I decide to set up shop somewhere else? Am I really going to haul that Moroccan plate that I never use to some other state?

Is this something I would have a hard time replacing if, say, I decide to set up shop here again someday? If yes, then it’s worth keeping. If not, and if I hit on any other yeses above, then it goes. So I guess the never-used Moroccan plate stays.

Does the thing literally not even work? Maybe, but the cuckoo clock stays, dammit!

Now, as I said, all (okay, most) of this seems quite simple, with some perfectly manageable gray areas. But when you’re potentially leaving for good, it adds some layers.

For example, the TV. Now, it’s a fine TV, and I like owning a TV. How am I supposed to watch the Timbers when they’re away? Or Law and Order? I paid about $500 for it like 10 years ago, and it’s hanging in there. But. Let’s just say I decide after a year of travel that I want to live in Portland again. Having a TV here would be handy. But what if I settle in, oh, Montana? Or even farther away in the US. Is it worth having that TV in a storage unit so I don’t have to replace it? How does that change if I settle somewhere else and therefore have to transport this TV? How does all that compare with buying another one wherever I wind up? And could I sell it now? What would it cost in a year to buy a comparable set? Do I really need a TV anymore?

Might be a good time to mention I will occasionally overthink things.

But the TV is easy, because there’s another standard question in The Test: Am I really struggling with whether or not to keep this thing? If so, then it’s either for emotional reasons (and it stays) or not (and it goes.) So the TV goes.

Much harder is the copper pot.

See, years ago I went on a trip to France with my parents, and one day we got lost. This was before cell phones, so we were traveling by a map we couldn’t read and signs that were inconsistent at best. We saw a sign for a town which, it seemed to me, had the words God, “city,” and something else in its name. I asked Dad to look up that something else in our phrase book, and a moment later he laughed and said, “cookpot.” This was hilarious, and of course we had to go and visit God’s City of Cookpots.

Turns out that in Villedieu-les-Poêles, Normandy, starting in the 12th Century, local monks made copper pots. The town has been famous for it ever since. Hell yes, I bought a copper frying pan there that day, and I’ve used it many times since. I love it. It most definitely stays.

Then, years later, my mother ordered a copper pot from there for my birthday. It’s lovely. And my Mom was lovely. And I’ve had that pot for 15 years at least.

I don’t know why, I just haven’t used it. It’s for like pot roasts or something, and I don’t really eat pot roast. I’m sure I could find something to do with it, but there we arrive at I’m sure I’ll use it someday. Also, well, Mom isn’t around anymore to get her feelings hurt. So, I mean …

So I mean, What the hell with this copper pot? I think I’ll give it to a friend who loves to cook pot roast. But they will have to hear the story of God’s City of Cookpots to get it.

My stuff, despite being trimmed by The Test every two years on average, is filled with crazy-making shit like this. There’s the cookie jar I bought from a potter friend, still on the top shelf of the cupboard where I put it about 20 years ago. He’s still a friend, but If I fill it with cookies, we all know where that’s going. There’s a clapper thing I got at Leicester City Football Club the year they won the Premier League. It’s a nice memory, but also, it’s a piece of paper I never even look at. Kind of forgot I had it, come to think of it …

The picture of the 2013 Timbers, first ones to make the playoffs. The can I bought filled with olive oil in the Chianti hills. The DVD of a PBS show I was in, but now can’t play because it’s a DVD. The vase with the broken piece that I also never put flowers in. The old newspaper clippings that neither I nor anyone else will ever look at. The drum I made by hand during the minute and a half I was into drumming a bunch of years ago.

My brain says lose it all and be free! My heart would absolutely fill that storage unit to the brim — you know, just in case. My brain remembers going through Dad’s stuff when that time came. My heart still has some of the stuff that came out of there. Brain: lose it unless you would cry without it. Heart: Crying already. Brain: Grow up. Heart: Cold bastard.

The nice thing about The Test, in the end, is that until the day comes when all the answers are “It goes,” there will always be another taking of The Test. And when that day comes, it won’t be me going through all this stuff, thinking about .. all this stuff. I’ll be, you know, not around anymore. So the person applying The Test on that day will have a much easier time with this damn copper pot.