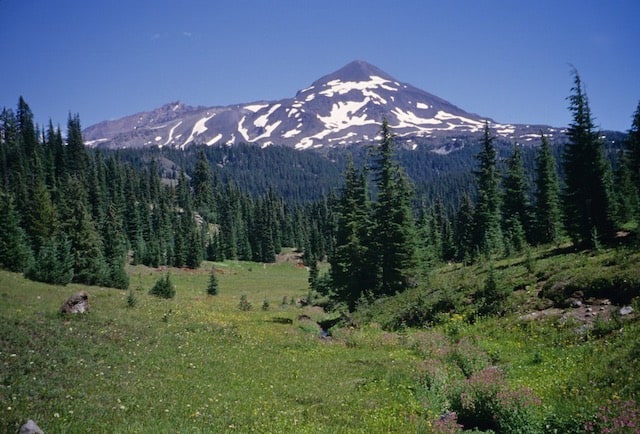 One fun aspect of going back through my old Memphis Flyer travel columns has been re-living my first experiences with the state of Oregon.

Places which I have now been to several times, places which I am already in the process of missing as I make plans to move on from Oregon, were once places that revealed themselves to me on magical, epic journeys into a new land.

One such place is Linton Meadows, which I referred to in this Flyer article from April 8, 1999 as my own personal Shangri-La. I had been there for the first time in the summer of 1998.

When I was 14 years old and going to a summer camp in Wyoming, we went on a five-night backpack trip up into the mountains. Our counselor told us we were going to a place called Shangri-la. It turns out that the place, at least on the map, was technically called Dead Indian Cradle, but our counselor told us such names don’t mean anything.

“Shangri-la,” he said at the campfire the night we got there, “is what people call their own personal heaven. It’s a place where you see beauty that you can’t describe or forget, and where you feel ultimately comfortable. This place is my Shangri-la.”

Dead Indian Cradle, a little northwest of Cody, is a magnificent and rarely visited place. But I have since found my own personal heaven. It is called, on the map at least, Linton Meadows. It’s about five miles from the nearest road and 5,200 feet above sea level, up in the Three Sisters Wilderness in west-central Oregon.

The Three Sisters are volcanoes, all about 10,000 feet high, and all in a row – South, Middle, and North. They are surrounded by the kind of country that dreams are made of, country that you still have to walk or ride a horse to get into. Tall trees, clear streams, soaring peaks, placid lakes … It’s the kind of country that leaves you not only speechless but awe-struck. I spent a week there one summer in a state of amazement.

At the start of the trip, my friend and I climbed South Sister, the highest (but easiest) of the three. It’s a trip you can do in a day, assuming you can handle a 12-mile round-trip hike with 5,000 feet of up and 5,000 feet of down. We barely did. You reach the trailhead, in the poorly named Devils Lake Campground, on the utterly surreal State Highway 242. It’s about an hour from the city of Bend, which is right on the Deschutes River, in the high-desert, Santa Fe-like country of central Oregon. It’s the other, not-so-rainy side of the Cascade Range.

The top of South Sister, even in August, is a snowfield as big as a dozen football fields. The view is of tree-covered ridges and snow-covered peaks, clear off to the horizon. Two of those peaks are called The Husband and The Wife – legendary creators, I suppose, of the Three Sisters. We climbed The Wife, too – and made plenty of lame jokes about “getting on top of her.”

Down between Middle Sister and the Husband, there’s about a mile-long oval-shaped bowl. It’s filled with grasses, cut by a creek, and edged by tall pines. In August the grass is knee-high and the pines sway in the 70-degree mountain breezes. There’s a huge spring that pours water into the bowl from the east – a 100-foot waterfall that comes right out of a rock wall – and where that water spreads out, wildflowers abound.

We camped on a little hummock in the middle of the meadow for two magical nights. It was the peak of wildflower season, a time when there are more varieties of flowers in bloom than we cared to count. Right at the foot of the spring, blooming plants reached 5 and 6 feet high. Purple mountain lupine was dominant mixed in with an endless variety of oranges, reds, blues, yellows, and gold. All along the hillside were dozens of little springs, some of them sprouting streams no more than an inch wide. But each stream, no matter how small, was marked by a ribbon of flowers. The knee-high August grass of Linton Meadows is the background for a quilt of wildflowers.

We actually found a place that’s almost as nice as the meadows: Husband Lake. It’s right at the treeline, just below the rock face of the Husband, which even in August had a patch or two of snow. The water was a couple of notches above freezing, so a swim was more like a courageous dip. We stood on the shore giggling at each other, wondering who would go in first.

We lounged on the shore afterward, the afternoon sun quickly drying us and the pines swaying above us, then we went back down in the meadows to camp. It was dusk, and Middle Sister was bathed in pink light. We ate dinner and sipped tea by the side of the stream, and just as it got dark a half-dozen deer came out of the trees and pranced in the meadows.

We left Linton Meadows the next morning. That’s what my journal says, anyway. But part of me is still up there, prancing around Shangri-la with the deer.