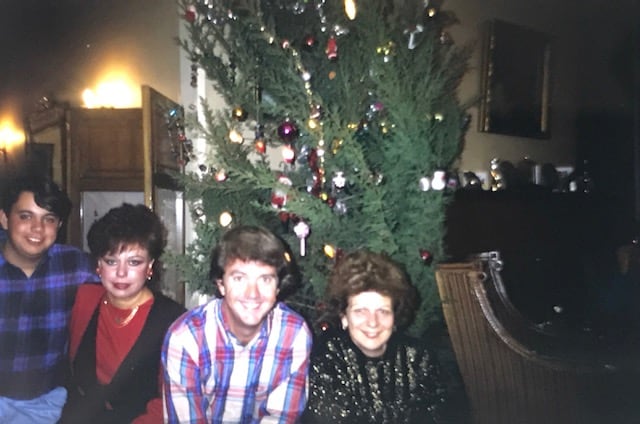 In the middle of a crazy travel time, in a land very foreign to my own, I found the Christmas spirit in a remarkable box from home.

A Box From Home

The Cairo airport is a particular kind of chaos. Customs, the final rung on a ladder into madness, is in what amounts to a warehouse filled with people, all of whom appear to be shouting at once. The phrase “teeming masses” comes quickly to mind. With your visa checked and passport stamped, you’re essentially thrown to the wolves — cabbies and baggage handlers and tour guides — beyond the gate.

I was being picked up by the parents of a friend in Memphis, so I had that going for me. Of course, I didn’t know what they looked like, but my eyes found their mark in five seconds flat, for of all the coincidences I’ve encountered in my life, none could have been greater than somebody else in that hall on that night wearing a bright orange University of Tennessee jacket. It’s the only time this Ole Miss fan was ever happy to see the Big Orange.

We embraced warmly, like old friends, and this is what he said: “Hello, welcome to Egypt, it’s good to see you, now we are going to the duty-free shop.”

I had been in Asia for three months before this, so I was ready to roll with anything, but his enthusiasm for duty-free shopping caught me off-guard — until we got to the shop and saw an odd sight which quickly explained everything. In line before the cash register were more than a dozen pairs of people; each one consisted of a foreigner with his passport out and an Egyptian with several bottles of booze and a handful of money.

My host gathered up a bottle of champagne and three bottles of Johnnie Walker, and we hit the line. “In Egypt,” he explained, “only foreigners can buy alcohol, four bottles each visit. This scotch is $15 in here and $100 on the black market.” Onto the pile of trials and tribulations I’ve heard of in the Middle East — war, terrorism, political strife — I added having to pay 100 bucks for illegal bad scotch.

It was just before Christmas, and while you might assume that Egyptians don’t do Christmas, in fact there’s a sizable community of Christians there, my hosts included. There are Catholics, but there are also the Coptic Orthodox, a fourth-century splinter group from the Byzantine. I’m told the Copts are the direct descendants of the Pharaoh’s people — makes sense, considering the show Moses laid on them — and that the Muslims came from elsewhere. Of course, I was told this by Christians. It’s unconfirmed by Muslims.

Even with Christians present, Christmas in Cairo is pretty low-key. There are no house lights, no Santas, no malls to crowd. The main activity is going out to dinner on Christmas Eve, which we did in a swank neighborhood on an island in the Nile. The evening began with many, many glasses of Johnnie Walker, then some synthesized dance music, which I was told was Kuwaiti.

But there’s something different about Egyptian dinner parties: The last thing one does at such an event is eat dinner. Egyptians after dinner are like Englishmen leaving a pub: With almost no more conversation, it’s time to go home. So you put off dinner as long as you can. This party I was at lasted until 2 a.m. Dinner was served at 1:30.

Before that we had “finger foods,” sort of like Egyptian tapas. I didn’t know what any of them were, but there was one that was greeted with tremendous joy around the table. They told me I must try some, and gave me the Arabic name, which I couldn’t even repeat then, much less remember now. It was a little fried patty, the inside of which looked and tasted like overly mashed potatoes with lumps of half-melted cheese mixed in.

Foolishly, I asked the folks at the table, “What was that I just ate?”

After the laughter settled down, they said, “It is the brains of a sheep.”

And yet I held it down.

Sure enough, a while later, out came more fried patties, and up came another reaction of great joy and glad tidings, followed by another Arabic name. This time I requested advance warning.

Again the laughter, then: “This is the testicles of a sheep.”

This is where I would like to remind you that I was drinking that night, because right now I am going to write a sentence that one would never expect to utter in any way in a thousand lifetimes: A sheep’s testicles taste just like his brain.

Sometime the next day, still a bit fuzzy from the night before, we had our Christmas. I gave my hosts silk I had bought in Thailand, and they gave me a beautiful sweater which would later be stolen while I slept on a Turkish bus. But the real gift I got that Christmas was a box from my mom back in Memphis.

Mail on the road is always a great thing, and after three months away from home it’s pure magic. So I tore into my box from home like a refugee into a bag of rice. The first thing I saw was the nose of my stuffed Panda, Andy, my companion since the crib. Next to him was a little Santa I have hung from my bedside lamp almost as long. My old Christmas stocking was there, too, stuffed with Dinstuhl’s candy. A Commercial Appeal sports section lay next to a copy of the Flyer. And triple-wrapped in aluminum foil was a baseball-size chunk of rum cake, which I quickly and greedily consumed.

It was the only Christmas I ever spent away from my family, and the only one at which I wept. But I didn’t cry tears of sadness or loneliness. I was on the other side of the world, but I’ve never felt closer to home. Christmas is a lot of things to a lot of people, from deeply religious to cheaply commercial, but to me, that morning in Cairo, it was all wrapped up in a box from home.