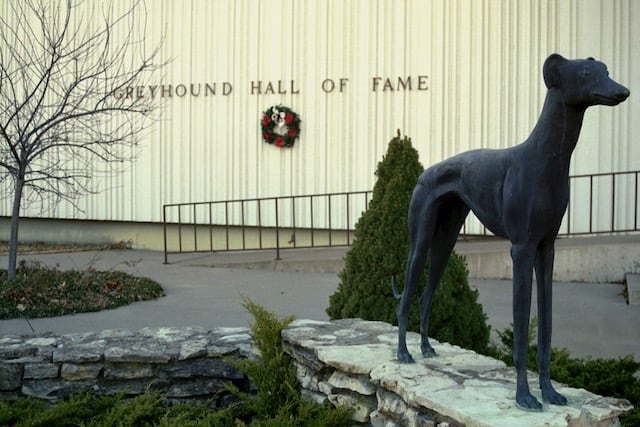 Sometimes the biggest mistakes you make turn into fun travel stories. And sometimes outing yourself as a complete goofball can lead to some memorable writing.

So it was with the time I … well, it doesn’t really need any setup. I’ll let Paul of the Year 2000 tell you all about it.

This story originally appeared in the Memphis Flyer of February 10, 2000. The actual event was from about two months before that.

Disappointment, and then amazement, while on a quest in Kansas.

A couple years back, I did a column on how much I love riding the Greyhound bus. Most people thought I was crazy, but my mom sent me an e-mail telling me she had heard of a Greyhound Hall of Fame in Abilene, Kansas. At that moment, I knew I would someday travel to that magical place.

So recently, when I was planning a cross-country drive, I made it a point to go through Kansas so I could make my pilgrimmage to Abilene. I say this to deflect allegations that I drove all the way to the Sunflower State just to stroll among the Americruisers and other great motorcoaches of yesteryear.

About 50 miles east of Abilene, I saw the sign. Now, it had never really occurred to me that the Greyhound Hall of Fame was anything other than what I was looking for: a museum about the history of bus travel in America. So imagine my embarassment and dismay when I came upon the sign telling me I was within miles of my goal — and there on the sign was a picture of a dog.

I did my finest Homer Simpson “DOH!” — or some similar exclamation — and decided that, well, even if it is a racing dog hall of fame, I’ll stop and check it out. This is a quest, after all.

First I stopped in the Abilene Visitors Center, which — as in just about every small town in America — is in the old train station. I walked in and was greeted by, I believe, the woman who played Auntie Em in The Wizard of Oz. She holds out a plate and says, “Would you like one of Mamie Eisenhower’s sugar cookies?”

“Um, sure. When did Mamie make them?”

Who knew that Abilene is the hometown of Dwight D. Eisenhower, and also the site of his presidential library? At the Eisenhower Center they’ve got his home, his Presidential Library, and a 30,000-square-foot museum, which had, when I was there, an exhibit called “The Barbie Doll at 40.” Auntie Em didn’t explain whether President Eisenhower collected Barbies, but one historian did call him “the great Cupie Doll president.”

Abilene is also, judging by the number of brochures Auntie Em laid on me, one of America’s great tourist meccas. There’s a recently built “Old Town” — Abilene was the end of the Chisolm Cattle Trail and was tamed by Wild Bill Hickok himself — and a couple dozen Victorian mansions built by cattle barons, railroad barons, and other sorts of thieves. There’s also an antique doll museum (what is it with dolls in this town?), a fashion museum, an American Indian Art Center, the Kansas Sports Hall of Fame (featuring Wilt Chamberlain, Gale Sayers, Tom Watson, and the immortal Steve Grogan), and “The Largest Gift Shop in Kansas.”

That last one didn’t have a brochure: I just saw it on the way down to the Hall of Fame, which is right across from the Eisenhower Center. Pretty convenient: Scholars on break from the library can come read up on their favorite dogs.

Two of the leggy critters were chilling in the lobby, in fact: recovering, I was told, from a recent visit by a school group from Topeka. I made small talk about them to the woman behind the counter, and to make a long story short, she got through talking about two hours later, and my head was about to explode with Greyhound-related facts and figures.

That’s not to say that I was bored — I was fascinated, in fact. If nothing else, she was the first person ever to look me in the eye and, without even blushing, use the phrases “stud dog” and “brood bitch.”

I had no idea of the culture around goofy-looking dogs that run faster than hell. For one thing, I found out that Abilene is the “Greyhound Capital of America” because the ranchers and farmers in the old days needed to clear out some pesky jackrabbits, and in England these dogs were bred to do just that.

I also found out that even those loafers in the lobby could do 40 mph, and that the semen of a good stud dog (I just blushed) goes for literally tens of thousands of dollars. I got the whole lowdown on how good dog racing is for America, how well the dogs are treated, and all about adopting a retired racer. You can look up a lot of this stuff on the Internet, if you’re interested.

I finally fessed up, as I was leaving, that I had thought I was headed for a bus museum. The lady smiled — heard that one before, she said. In fact, one time a guy showed up, acting as a guide, with a busload of 50 retired bus drivers. Imagine how that clown felt!

Anyway, thanks to a little Internet digging, I now have a new Goal in Life: Hibbing, Minnesota. That’s where Greyhound Bus Lines just opened its “Origin Center,” 11,000 square feet of history, memorabilia, and a fleet of restored buses dating back to 1914. Hibbing is also Bob Dylan’s hometown, for whatever that’s worth.

Still, Hibbing will have to work mighty hard to compete with Abilene.