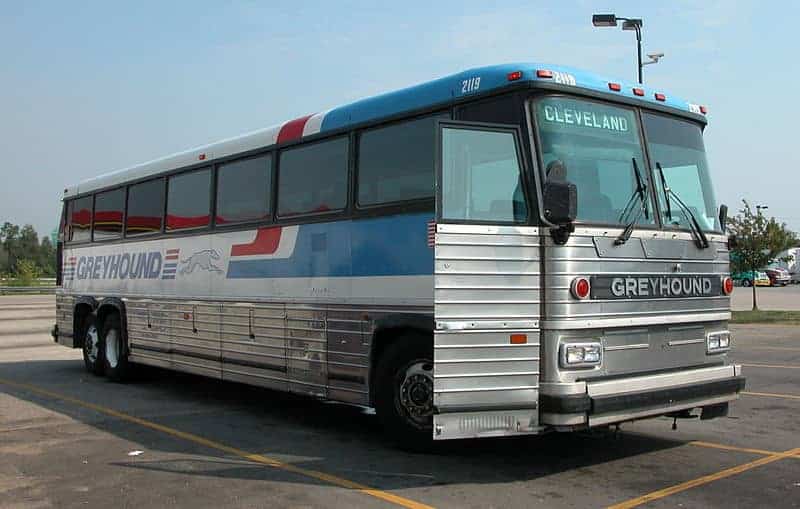 Another from my Memphis Flyer travel writer days, this one a celebration of “going Greyhound,” which I used to love.

Sure, most people think I’m nuts, but I happen to love going Greyhound.

I’m a clean-cut white guy raised in East Memphis, and most people are surprised I even ride the Grey Dog. Generally, their response is something like, “Man, I rode the Greyhound one time, and it was a complete nightmare,” followed by a litany of bus breakdowns, middle-of-nowhere towns, and toothless freaks. Perhaps this sort of experience sounds familiar to you.

But I was on a bus going down the Oregon coast one time when the driver fell asleep twice and went off the road. Freaks and crazies? I arrived at the Port Authority Terminal in New York City at 2:30 a.m. on a Saturday. There were two dozen shadowpeople waiting for us, and the driver announced, “Whatever you do, don’t talk to anyone.” I was on one in West Texas once where a very large man slept through the driver’s announcement that the toilet was not working and was not to be used. Two minutes out of the station he woke up, went back there, and … well, I can’t even finish that story.

So I have had my bus sufferings. But all in all I consider the bus to be a romantic and entertaining way to travel. Romance was never billed as a smooth ride, and who can fail to be entertained by the many currents of the human river? I prefer, in other words, to think of it as a Motorcoach. That sounds better than a bus.

I’ve come up with a little rating system for Greyhound experiences. If you’re just going a few hours and the bus isn’t crowded, you’re Cruisin’ — but headphones or a book are still recommended. If you’re on a longer ride, especially with an overnight, and maybe you’ve got a little less legroom, and there’s somebody next to you the whole way, then you might be Crampin’.

However, if you’re sitting next to the last empty seat on a snowy night in Denver, and just before the bus pulls out you see a 300-pound man on crutches hobbling towards the bus, then you’re about to be Crushed. Then, you’re being tested by the most treacherous of the travel gods, the Great Grey Dog.

I have been tested greatly by the Dog. In Dallas, I missed an express to Albuquerque because two agents told me two completely different things, both of them wrong. The express bus I missed took 15 hours; the non-express I caught, three and a half hours later, took 21.

But there are rewards. For example, that non-express to Albuquerque stopped in Abilene, where I had a wonderful lunch at an 80-year-old family restaurant/soda fountain and spent a couple of hours talking football with some Texas Tech people.

So there is another rating in my little system: Stylin’. I styled through the mountains of western North Carolina one time, chatting with a sweet old couple who had just harvested a bunch of apples and were sharing them with everyone on the bus. The driver of that bus, flying in the face of Grey Dog regulations, went several miles out of his way to put me at a trailhead.

I styled in West Lafayette, Indiana, another time. The Dog broke down there on a Saturday morning, and I saw in the paper that Purdue’s football team had a home game against Michigan later that day. While everyone else moped in the station, I styled with the tailgaters over by the stadium.

I have long suspected that many people’s objections to the Dog take root in the fact that most people on the bus are not middle-class and white. But to me the whole fun of traveling is in getting out of your environment. Who says money gets you into all the good places? Traveling by bus is sort of like staying in a youth hostel instead of a hotel. You give up a modicum of personal comfort to spend less money and meet much more interesting people.

Besides, you get to see everything on the way. As anyone who has ridden it can tell you, the Dog stops everywhere. Consider: Between Memphis and Nashville, you can (A) drive I-40, keeping your eyes on traffic and seeing only the roadside pines, (B) take an express Greyhound that takes the same amount of time, or (C) kick back on an Americruiser and see the sights of Brownsville, Jackson, Camden, Waverly, and Dickson. Granted, there are times when the short trip is what you’re after, but long trips tend to get stranger, and strangers make the world go ’round.

Actually, this would be a good moment to say that, while I have always had a soft spot for the bus, the truly most wonderful way to travel anywhere is by train. But just for a giggle, call Amtrak sometime and get the answer to these three questions: “How long does it take to get there?” “What time do I have to go down to our miserable train station?” and “How do your prices compare with any other mode of transportation?” Amtrak’s continued existence baffles me.

(A side giggle can be had by calling the Memphis government and asking, “How’s the work going on Central Station?”)

Heck, on Greyhound from now until June 15th, you can go two-for-the-price-of-one, or, with a 21-day advance purchase, you can get a round-trip ticket, good for a month, anywhere in the country, for $118. It’s tough to beat that.

Every time I have seen the Dog loping out of the station down on Union, I feel a longing to be on it. I’m hypnotized by the destinations on the front of the bus — Chicago for pizzas, the Shedd Aquarium, and big-league baseball; Salt Lake City for skiing or backpacking; Charlotte for the trip over the Smokies; New Orleans for New Orleans.

But I am also hypnotized by the potential, good and bad, of swimming in murkier waters, of rolling the dice with Great Grey Dog. Predictability and comfort, after all, are the parents of a tired and lazy mind.