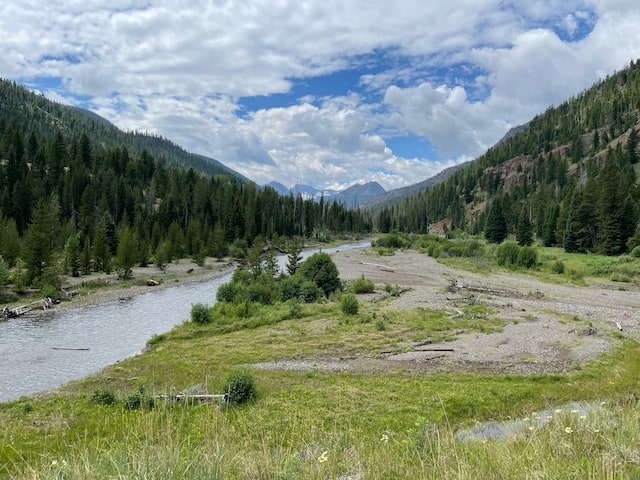 I was three miles up from the road, sitting at the edge of a forest, looking over a grassy, flower-dotted meadow and up a forested creek valley. There was a big grey mountain up there, half shrouded in clouds, with a few big patches of snow. The map said it was still a 12-mile hike to the base of it, but it looked like it was just right around the next bend in the creek.

It might as well have been 100 miles away, though, because I was not going to make it up there. At least not on this trip. That mountain, and all else that is up there, will have to wait til next year.

My friends and I had a pleasant walk to that point, up the Eagle Creek Trail in the Shoshone National Forest, and there are certainly no regrets. If a man walks through a lush Rocky Mountain forest to have a picnic at a place like that, and he shares the day with good friends who traveled all this way to be with him, and he considers it a problem that he didn’t go any farther, then that man has other, bigger problems.

I am certainly capable of being that man, but sitting in that meadow, contemplating what life was in that moment, what it had been recently, and what it won’t be — for now — is a perfect metaphor of my “life on the road” so far. Because it turns out that while the details change, the life doesn’t, until the person does. And if this man is changing, well, it’s going slow, like an out-of-shape hiker on a mountain trail. And like that hiker, maybe the change won’t go as far as he would have hoped, or as quickly. Still, he’s out there giving it a go. And the hike is just starting.

I left Portland, and my settled life, five weeks ago. I could skip ahead and quote an old saying: “Wherever you go, your baggage eventually arrives.” And that would be true, of course. But this is not a pessimistic, much less pouting, update. In 12-step recovery we talk about “progress, not perfection,” and also “trudging the happy road of destiny.” So instead I offer a progress report.

The last time I wrote in this space, I was in Rupert, Idaho, staying in a historic hotel on the town square and dreaming of seeing the mountains the next day, and many grand adventures beyond that. Tonight I’m in an AirBnB in Powell, Wyoming, thinking about the two book deadlines I am behind on, the challenges of running a business, the weight I’ve gained, the local hikes I haven’t done yet, and the fact that I won’t get them done until next year, because I leave again this weekend. Again: baggage arrived.

One thing is for sure, though: this little corner of America is as pretty as it gets. Powell is in a big, flat, half-irrigated and half-sagebrush bowl called the Bighorn Basin, with mountains all around it and canyons and rivers and colorful rock formations carving it up. The mountains pop off thunderstorms, wind, clouds and crazy light shows. And when the temperature hits 104 and the power goes out (because that’s life in a small town), the mountains offer shade and a creekside lunch spot just an hour’s drive from home, where a guy could sit and eat and watch a dipper look for its meal in the stream.

I’ve been in Yellowstone, 90 minutes to the west, several times, including a two-night backpack in which I had a section of the Yellowstone River all to myself for almost the whole time. I practically tripped over the most beautiful (harmless) snake I ever saw, spent lovely time chilling in camp, and also broke part of my backpack. Typical mixed bag of a hiking trip.

I entertained my sister for several days and got to play tour guide. Friends came through and we made a spectacle of ourselves playing “Bad Movie Bingo” watching F9 in a theater with about seven other people.

I saw the Rockies in full Crazy Waterfall Mode, when in a couple of places it looked like a dam had broken somewhere up in the hills.

I re-hiked one of the first hikes of my life, from age 12 when I was in summer camp, and remembered why I fell in love with the mountains in that exact spot so many years ago.

I visited an ancient “medicine wheel” on a plateau about 8,000 feet up in the Bighorns, created by indigenous people longer ago than even they know for sure.

I went to the Fourth of July Cody (Wyoming) Stampede Rodeo, where a rodeo-wise friend told me all about what I was seeing, where I was completely impressed by people and animals, and where the full, ridiculous, and adolescent Myth of American Greatest-Everness was on full display. (In Cody, many churches moved their Sunday services to Monday the 5th, because out here, there is but One True Religion, and it is America The Free and Heroic and Eternally Superior.)

And I intended to backpack more, and camp more, and explore more. And I intended to write Great and Fine Essays about all of the above, or at least snappy and clever tweets and posts. But I didn’t, because I have also spent day after day alone at my computer, working. Because it turns out that the work-life balance doesn’t necessarily get adjusted just because one is “on the road.” Vacation, sure, but living and working in Wyoming rather than Oregon is still living and working.

In other words, and also somewhat literally, I kind of intended to get farther up Eagle Creek. The mountain I saw is the highest point in Yellowstone Park, and with a car shuttle, one could do a very, very long and amazing hike over that peak and into the most remote, wild, farthest-from-any-road country in all of the Lower 48. I even got to fly over it earlier this summer, and I was stuck to the airplane window like a kid on his first flight.

Yep, it was right there, up Eagle Creek. And I could see part of it. And I didn’t go. Not this year. Hell, maybe never.

But I hiked up that trail, and I sat in that lovely little meadow on the edge of the forest, and I was there with two delightful friends. It was, in other words, a wonderful day. It even rained on us on the way back, and the thunder put on a hell of a show, which I took as a message from the Gods of the High Country that that day was not my day to go any farther up there.

That day will come, the gods willing, and meanwhile it’s been a fine start out here. And, at times, a tough one. It’s been life, mobile. And next week I’ll go somewhere else and do it some more. And I’ll write. And maybe you’ll read. And I’ll wonder why. And then maybe I’ll head on up the valley a little farther.

See you up there.