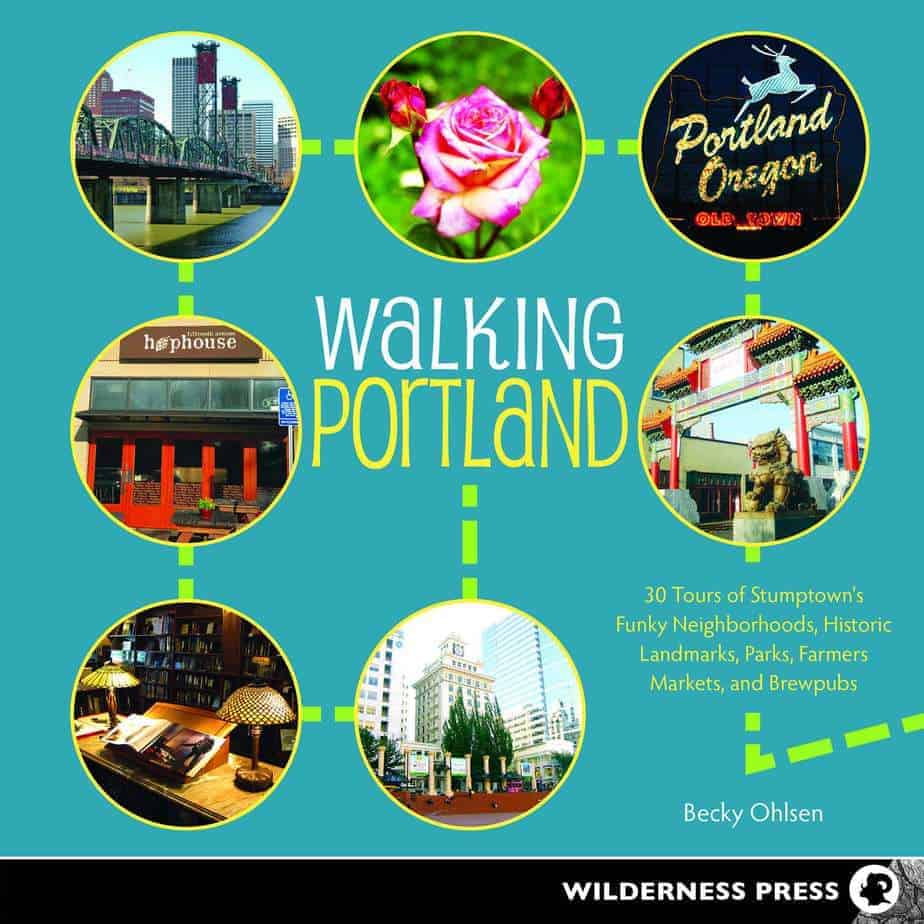 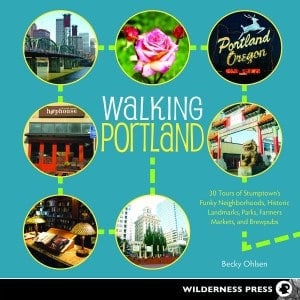 I just got my hands on a terrific-looking new book called Walking Portland, from the same company (Wilderness Press) that does my hiking books. There are so many books about walks in Portland that, at first, I wondered what the company was thinking. There are books about wilderness in town, trees, hills, stairs, hiking trails within an hour or so … and of course my 60 Hikes and Peaceful Places titles cover a few around town.

But Walking Portland by Becky Ohlsen is different, because it’s not just about walking for exercise or contact with nature. It’s about walking the city: neighborhoods, landmarks, restaurants, architecture, woods, the whole thing. Becky, who has written for the almighty Lonely Planet series of guidebooks, knows her way around town and is really great at telling you how to come along for the adventure.

For example, in my neighborhood, South Waterfront, she has you start at OHSU up on the hill, look around a bit, then take the tram down the hill to where US Navy ships were once made and un-made. The area is all cleaned up and now filling up, and she has a lovely little stroll through a charming park, past a sweet Vietnamese Bistro and a coffee shop, then to a little walkway along the river that I didn’t even know about until I read the book.

Local media is digging the book, as well. The Oregonian said it offers “appealing walks while adding a dash of hidden gems” (story here), and Portland Monthly said the walks “feel like mini vacations yet cost you nothing” (review here).

After meeting her for brunch, I emailed some questions to Becky to find out more. Her answers are below. It’s a really groovy book, and I can’t wait to get started using it myself.

What is this book all about?

To me, it’s about taking a closer look at Portland, whether you’re new to town, just visiting, or have lived here for years. One of the things I like best about walking is that it slows everything down. We’re so used to hurrying from place to place — the house to the office to the gym to the store, on the bus or in the car, usually running late — that we tend to miss a lot of the scenery in between. And Portland is a really great-looking city! Parts of it, anyhow. So this book is not strictly about getting from place to place; it’s more about seeing what’s right in front of you. I should also probably clarify that it’s not a hiking guide – these are city walks, through neighborhoods. Some of them incorporate trails and parks, but it’s not a wilderness guide, despite being on Wilderness Press.

What inspired you to write it?

Short version: my friend Ryan Ver Berkmoes asked me to. He’s a fellow Lonely Planet author and wrote Walking Chicago for Wilderness Press; he had moved to Portland and was offered this book. He knew I’d lived here forever and thought it would be more fun if we teamed up, so I signed on. Both of us liked the idea of exploring closer to home, for a change – writing for LP can keep you on the road half the year, if not more. And we liked the less rigid structure of the books – LP books these days are very template-focused, with not a lot of room for whimsy, to put it mildly. We liked the thought of being able to go off on little tangents, make fun of shopping malls and terrible neo-beige architecture, mourn a few losses, praise our favorite dive bars with a complete lack of objectivity. As it turned out, Ryan’s travel schedule for LP ended up being so hectic that he turned the whole project over to me. And here we are.

How is it different from other walking or city guides?

There are so many guides to walking in Portland, some really good ones, but every writer is different. This book covers things I personally like or find weird or interesting. It’s possibly a little odd. For instance, there’s not a big downtown-architecture tour, but there is a walk set in the future. (Kind of. It requires some pretending.) I also tried to leave enough space for people to discover things on their own – I think that’s important. You want to feel like you’re on a little bit of a treasure hunt. I’ll point you to the area, the street or block where interesting things are going on, but then it’s up to you to decide which doors you want to open. I don’t like a bossy travel guide.

How do you hope people will use it?

Along those same lines, I hope it’s more inspirational than dictatorial. I mean, of course I’ll be thrilled if people use it at all. Paperweight, bug squasher, decoration. It’s a cute little thing, looks nice on the shelf. People might walk around carrying it as they follow the actual routes I’ve described, and that’s awesome. But it’s also fine if they look to the guidebook for a general sense of a neighborhood and then make up their own routes. (I for one don’t tend to carry maps around while exploring, unless I’m marking them up for a guidebook.) I wouldn’t want people to feel tied to an exact route. What I hope the book does is get folks into new neighborhoods, give them a little of the flavor of the area, and then inspire them to explore further.

I’m also secretly hoping people will find amazing stuff and then tell me about it. The city is always changing, new things pop up all the time.

Tell me one or two of your favorite discoveries while researching the book.

Oddly, a lot of what I discovered had to do with the fate of various historical Portlanders’ earthly remains. Everyone knows the name William Ladd, of Ladd’s Addition. But I hadn’t heard about the bodysnatching! Years after he died, his corpse was kidnapped, stolen for ransom. They found it later along what’s now Macadam Avenue. When they reburied him they covered the grave in cement this time, just to be sure.

And then later when I was reading about Dr James Hawthorne, who ran the asylum that once occupied lower Hawthorne Boulevard, I learned that not only is the doctor buried in Lone Fir Cemetery but so are over a hundred of his patients, in unmarked graves of uncertain location. Sad and spooky.

I also learned about the first hanging in Oregon – I guess all my discoveries were morbid. There’s a route in the book that goes along Balch Creek in Forest Park. The creek is named for Danford Balch, who became the first person executed in Oregon (in 1859) after he “accidentally” shot the ranch hand his daughter had run off with.

Are these walks demanding? Easy? Something for everybody?

There’s a good mix. Most of them are very undemanding, comfortable strolls around neighborhoods, where you can stop as often as you feel like it, have a coffee or a cold drink, browse in a shop, eat lunch. A few of the walks involve some hiking; there’s one that goes up to Pittock Mansion, for instance. Some of the walks are challenging on more of an existential level, like the one that follows the Columbia Slough trail around the site of the Vanport flood. It’s the windswept middle of nowhere…lots of time to ponder.

It’s spring here in Portland now; what’s a favorite walk from the book for this time of year?

Portland is amazing this time of year, particularly if you’ve remembered your allergy medication. There’s a particular color of green that pops out in springtime here – I’ve never seen that color anywhere else. It’s almost iridescent. And the flowers are just nuts, not only in parks and gardens but people’s yards. So, short answer, any of the walks will be gorgeous right now. But I love walking around by Reed College and the Crystal Springs Rhododendron Garden in spring – if you time it right, you’ll see baby ducks, and who doesn’t love baby ducks? The walk through Forest Park to Pittock Mansion is another great one right now, although it can get muddy if we’ve had a ton of rain. But I really like the mellow Southeast neighborhood walks this time of year. So I’d also recommend the Ladd’s Addition walk and the Belmont-Stark loop.