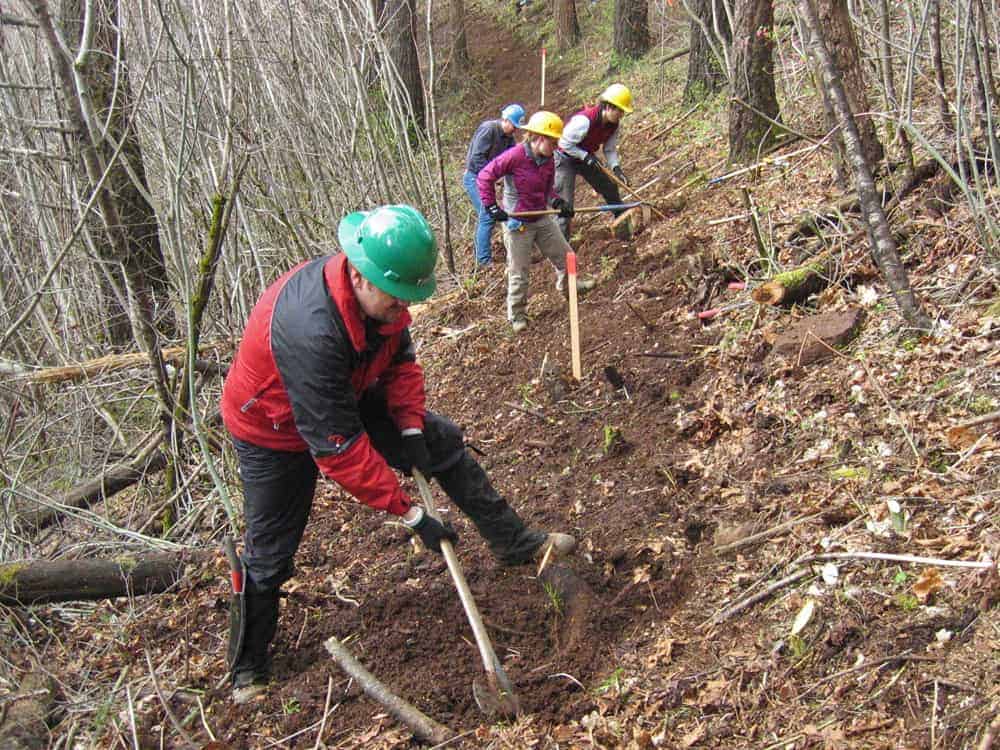 I have been a longtime reader and poster at PortlandHikers.org, and I have admired the work being done by Trailkeepers of Oregon, which kind of grew out of the website. In fact, I have always dedicated my hiking guides to the people who build and maintain trails.

And I much appreciate the work and dedication to such efforts of one Tom Kloster.

Tom works at Metro, but when he isn’t doing that he’s posting fabulous blog posts at WyeastBlog.org, like this one about the Sheppard of Sheppard’s Dell in the Gorge. He is also the current president of Trailkeepers of Oregon. And he is on a campaign to make Mount Hood a National Park. But that’s for another day.

Today, I am sharing an email interview I did with Tom about TKO, about the status of trails in the national forest, and about how people can get involved with local trails.

It’s a technical knockout, where the referee calls a boxing match at the point where the fighters can no longer safely continue… and it’s a Justin Timberlake song from his latest album… OH, and it’s also the acronym for Trailkeepers of Oregon (TKO), a new non-profit based here in Portland that is dedicated to trail stewardship and advocacy.

TKO was formed in late 2007 by a group of hikers who had organized an impromptu trail maintenance project for an old trail on Mount Hood that was in danger of fading away from lack of maintenance.

(Editor’s note: That would be the Owl Point Trail, part of the Vista Ridge hike. Both (thanks to Tom) are in the new edition of my book, 60 Hikes Within 60 Miles of Portland. End of sales pitch.)

Doesn’t the forest service, or some other government agency, maintain the trails?

Not so much. Trails in national forests are most at risk, as the Forest Service has radically curtailed trail maintenance, and they are doing much less construction of new trails to serve our growing population. Most trail work in the Mount Hood National Forest, for example, is done by volunteers.

We actually have fewer trails today than we had in the 1930s and 40s, when much of the system was built, and we’re continuing to lose more trails every year. That’s part of what spurred TKO into action, as the immediate concern is a shortage of agency funding to build and maintain trails. But the larger issue is ensuring that access to our public lands remains a national priority. Both are part of TKO’s mission for Oregon.

What kind of projects does TKO do?

Most of our projects focus on maintenance, although we’re starting to get more involved in building new trails. If you’ve hiked the Angels Rest trail in the past few years, you’ve walked on trail sections that we’ve reconstructed, as well as completely new sections that bypass areas where the trail was too far gone to save. Angels Rest is a case of a trail being loved to death, by virtue of proximity to Portland and our rapidly growing population and demand for trails.

We also do projects aimed at simply saving less-traveled trails, and some of these are surprisingly close to Portland. A great example is “the other” Eagle Creek, near Estacada, where we’ve worked with other trail groups to keep the trail open.

How can I get involved?

TKO sponsors trail stewardship projects at least once per month, in meet-up format. You can learn about upcoming projects on our website. You can also join our e-mail list to get project notices every month.

Once you’ve signed up for a project, you simply show up at the trailhead, and TKO provides everything you’ll need: tools, hard hats and instant training on how to become a rock-star trail crew member for a day.

No. We make absolutely sure of that with some basic safety protocols and trained crew leaders. Also, everyone wears hard hats. Like hiking itself, the most dangerous part is probably the drive to the trailhead.

Yes, but in a good way – as in, you’ll get a good workout, an honest day’s work and a priceless feeling of really giving back to the community. It’s very rewarding to visit trails you’ve worked on, and see how your contribution has allowed so many to enjoy nature and the outdoors. It’s pretty addictive!

How should you prepare for a project?

As for clothing, hikers tend to wear hiking attire when heading out to the trail, but for our projects, we actually recommend dressing like you might while working on a heavy yard project: long work pants (jeans are fine), long-sleeved shirt over a t-shirt, boots and work gloves. I personally favor those garden gloves with the rubberized palms – they don’t get too hot, and are great for griping. Bring a day pack with a rain jacket, snacks and a lunch, and you’re ready to be on one of our crews!

Is there a fee, or some other qualification, for this?

It’s free, though we do insist that our volunteers bring a sense of adventure, passion for the outdoors and a willingness to get pretty dirty over the course of a day!

What is the Portland Hikers forum?

The forum is an online community for hikers in Oregon and Southwest Washington. It was started by a couple of hikers, Jeff Black and Jeff Statt, in 2006, and later morphed into a full-blown non-profit that is run by volunteers. We’ve now grown to 6,700 members!

TKO’s connection to the forum is that the group of hikers who founded TKO met via the online community. TKO has since become the parent organization that sponsors the Portland Hikers Forum, bringing it full circle.

We’ve got a big change coming for the Portland Hikers forum in 2014, too: the site will transition to become OregonHikers.org, reflecting the connection to TKO, but also to be more inclusive to the hundreds of members who are from outside the Portland area. Watch for that to happen fairly soon, though it really won’t be too disruptive; the old name will still get you to Oregon Hikers.

What is the Field Guide?

The field guide will also being going through a transition this year, and become the Oregon Hikers Field Guide – though it already features hikes from all over the state, so this change is really just catching up with the content.