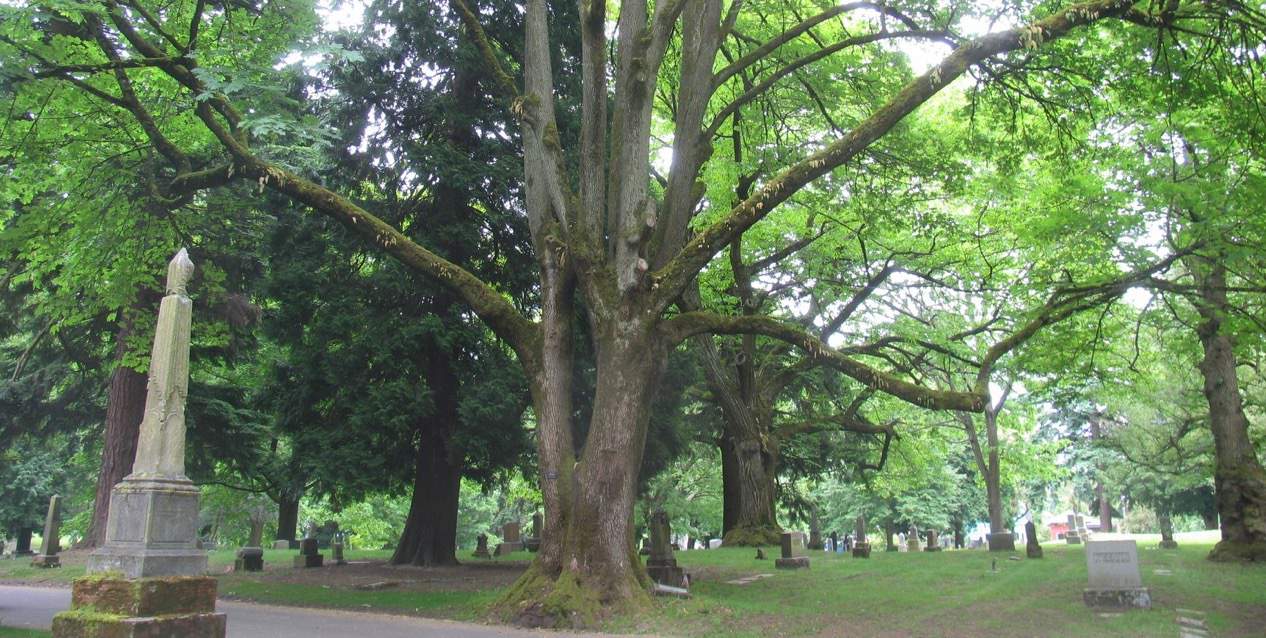 In that year, Portland was a town of a few thousand people on the west side of the Willamette River. What is now the corner of SE 20th and Stark Streets had recently been converted from the Stephens Farm to a cemetery, and the owner wanted to sell it to the city. But it was deemed too far from town, especially since Portland had yet to build bridges or pave streets.

In those days, this was a hill with one single fir tree, and probably a sweeping view of farmland in all directions. Think of how quiet and out-of-the-way that would have been.

Well, it still feels that way.

This place is highlighted in my book, Peaceful Places: Portland.

Perhaps the best way to visit this serene place is to admire the other trees that have grown around that fir. Three of them are Portland Heritage Trees; the first is a big leaf maple dedicated to Oregon’s first governor; it’s over by the soldier’s memorial. Turn towards Stark Street from there, then left before the fence, and look for an incense cedar on the right plus a gigantic western red cedar on the left.

The markers range from the simple and falling apart to the newest ones with photographs on them. You may also see a fireman’s memorial between four cedars, some markers with Chinese characters, and some you can’t even read.

And in the far northwest corner, still looking out over the country towards town, is the Lone Fir itself. A plaque identifies it.

If you look with just the right set of eyes, maybe you can still see that peaceful, rolling farmland.

Read more about Peaceful Places in Portland. Or just buy the book.

I also write about hiking, travel and spirituality,

and I offer great talks and trips.