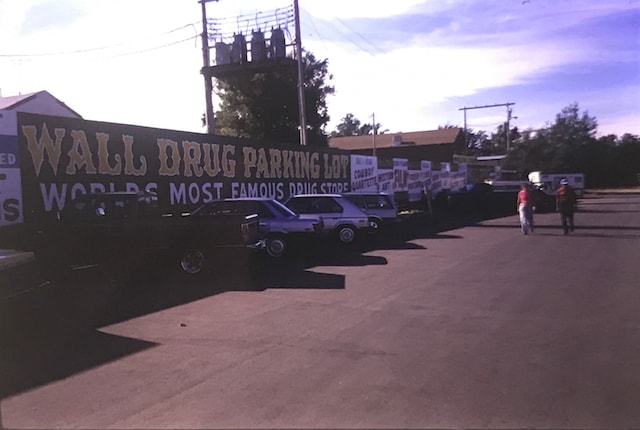 I doubt that Wall Drug, “the world’s most famous drug store,” has changed much since I went there in 1989, on a roadtrip from Memphis to Wyoming. It may well be bigger and weirder, though that’s a little hard to believe.

10 years later, I must have been looking at a Memphis Flyer travel column deadline and an empty ideas bin, because I dug up a photo and the 10-year-old memory of a place which, as I described it in this article, was “a drugstore, yes. It’s also a museum and a restaurant and a mall and a tourist attraction. It is essentially the only industry in the town of Wall, South Dakota, employing more than 100 of the 800 residents and taking up a quarter of its business district.”

(This article originally ran in the Memphis Flyer of September 2, 1999. My trip there occurred in July, 1989.)

What’s up with Wall Drug

The legend and the reality of one of America’s greatest tourist stops.

Perhaps you’ve seen the bumper stickers and wondered what it’s all about: Wall Drug. Or maybe you’ve been to, say, Amsterdam, and walked out of the train station only to see a sign saying, “5,397 miles to Wall Drug.”

So what is this Wall Drug? Wall Drug is a stop on the Must-Stop Circuit, along with Rock City and Ruby Falls and Graceland. It’s a place that has become famous mostly for being so famous. But exactly what it is can be tough to say. It is a drugstore, yes. It’s also a museum and a restaurant and a mall and a tourist attraction. It is essentially the only industry in the town of Wall, South Dakota, employing more than 100 of the 800 residents and taking up a quarter of its business district.

But to really understand Wall Drug, one has to grasp exactly where it is. It’s in western South Dakota, which looks like any other place, only with everything taken out of it. It looks like the Mississippi Delta without the trees and creeks and towns. It’s in country so big and so remote that when you drop down a hill of several miles on Interstate 90 your radio quits picking up the station.

Quite literally the only thing out there, on your way to Mount Rushmore or Badlands National Park, is Wall Drug. It’s the only pharmacy in a 6,000-square-mile area, but even if you don’t need anything from a pharmacy, by the time you reach Wall you will stop there. One study found that nearly 75 percent of the cars on I-90 take the Wall Exit, the one with the 80-foot dinosaur. That’s 10,000 visitors per day, 20,000 in the summer, to a town of 800. And it’s all because of the signs.

In one 45-mile stretch of I-90, there are 53 signs for Wall Drug. Imagine the road into Chattanooga with nothing but signs for Ruby Falls and Rock City. “Have You Dug Wall Drug?” “Who Has the Gall to Bypass Wall?” “Be a Wall Flower at Wall Drug.” One of the signs even “talks” — actually transmitting a radio signal for about a mile in each direction.

And then there’s the sign that started it all: “Free Ice Water at Wall Drug.”

In 1931, a man named Ted Hustead pulled into Wall with his wife and kids. He was a 28-year-old pharmacist who had spent all he had to buy the local drug store. Trouble was, nobody stopped there, and the Husteads weren’t going to make it. But his wife had an inspiration: Why not put up a sign on the road offering free ice water? Legend has it that when Ted got back from putting up the first sign, several cars were already in the lot. Today the annual Wall Drug billboard budget is over $300,000.

The Wall Drug signs have, in fact, taken on a fame of their own. They are on buses in London and Paris, in train stations in Kenya, near the famous statues on Easter Island, and seemingly every one of those poles with all the arrows giving mileages to various places. American GIs put them up all over the place.

Oh, and if you’re wondering, Wall Drug is 1,192 miles from Memphis.

And if you just happened to be on the way to someplace like Badlands or Mount Rushmore, and if you happen to get pulled in by a sign promising that you’ll “Get Walleyed at Wall Drug,” you will find yourself in a 75,000-square-foot store that fills an entire block and does about $6 million a year in business.

You can still get that free ice water, or a bottomless cup of coffee for a nickel. You can also get something to eat, like a Buffalo Burger for $1.50, and wash it down with California wine, or shop for souvenirs.

Or go out to The Back Yard and have your picture taken on a 6-foot-tall rabbit, shoot it out with a taunting video gunslinger, saddle up on a mounted bucking bronco, catch a free show by the animated cowboy quartet, or drop a quarter in the slot and make the gorilla play the piano. They’ve added an animated T-Rex, too.

Or, in theory, you can keep going and skip Wall Drug. But that’s not recommended. For one thing, if you’re on the way to see Mount Rushmore, you might as well take your time. Although it’s also on the Must-Stop Circuit, it’s also one of the great letdowns in all of America.

But what would really be tough, should you skip Wall Drug, would be dealing with the signs that are past it: “Did You Have a Ball at Wall Drug?” It would be awfully hard to explain how and why you were so close to Wall and didn’t stop — as if there was something else to do out there.