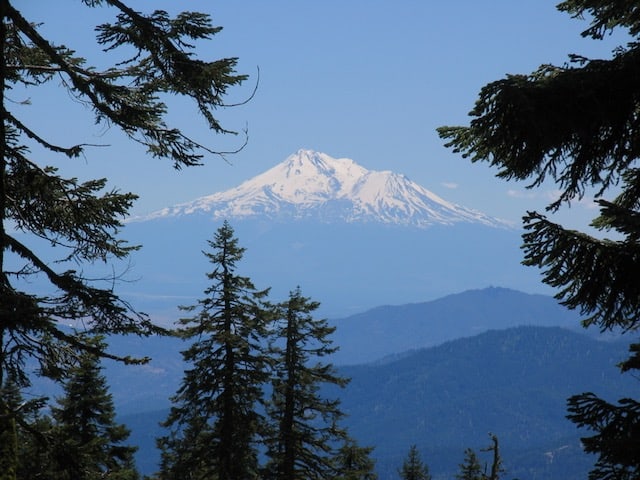 Another from my years a travel writer for the Memphis Flyer — and in this case, “Memphis” is an important part of the story.

Not that the story happened in Memphis; far from it. It happened in Mount Shasta, California, which as someone told me in the article is “Just down the road from Weed.” I had only lived on the West Coast for three years at the point this story went down, so I was still, well, let’s say reserved about the spirituality I encountered there.

This story originally ran in the Memphis Flyer of May 27, 1999. My visit to Shasta was the month before.

It wasn’t your typical barroom scene. There was no TV set, no jukebox, no rowdies, and not much conversation. Just a small glass of Irish whiskey, a Mark Twain book, snow falling outside, and a woman down the bar eating a bowl of pasta.

With pasta finished and Twain put aside, conversation began. Two sentences of Memphis accent determined rough place of origin, then pasta woman suggested to Twain reader that it was too bad he wouldn’t be in town the following week. Seems a festival was coming up marking the birthday of the Buddha, and a leading lecturer in the field of “hyperdimensional physics” would be in town.

Curiosity and Irish whiskey quickly overcame Southern provincialism and Methodist rearing, and off we went into the fascinating world that is Mount Shasta, California.

What I learned was that when an orb is spinning, among its many unknown qualities, is the development of overlapping tetrahedrons of energy within the orb, causing the release of energy at points roughly 19 degrees above and below the orb’s midpoint. Hence — since a planet is, after all, a spinning orb — the big spot on Jupiter, which is actually an upwelling of energy that just happens to be 19 degrees above the equator. Also hence the amazing spiritual energy and ongoing volcanic eruptions in Hawaii, which is about 19 degrees above our equator. All this is according to the theory of hyperdimensional physics, as I remember it, two glasses of whiskey and three weeks later.

Now, I can hear your Southern-ness saying, “Uh-huh, that’s some of that northern California mumbo-jumbo for ya.” Or maybe you’re thinking that the Irish whiskey confused matters. In fact, all it did was limit the memory, because this conversation went on for a couple of hours and covered lots of ground. The bookmark in that Mark Twain book has little orbs and tetrahedrons and arrows drawn all over it, along with the words “completeness” and “spirituality” and “love” and the address for a Web site: shastaspirit.com.

Or maybe you’re thinking that pasta woman was a freak. And by some definitions, she probably was. But if you consider such things as herbal medicine, astrology, holistic health, hypnotherapy, the Tarot, shamans, and psychics to be freaky, and if freaky stuff bothers you, then you might want to steer clear of Mount Shasta, California.

Mount Shasta — the town and the 14,162-foot peak — sits so far in northern California that it has more to do with southern Oregon than San Francisco, which is about a six-hour drive down the interstate. The area around Shasta has always been considered sacred by Native Americans, and starting in the 1850s there was a movement among whites to make it a separate state, Jefferson. That movement reached its peak around 1941, but the start of World War II squashed it. You’ll still see signs around declaring that you’re in Jefferson, though. And they have a Web site, too: stateofjefferson.com.

Some might say the Shasta area is another world, anyway. People in San Francisco told me to look out for all the freaks up there. To be sure, it isspectacularly beautiful. There are no other mountains of any significance near Shasta, so you can see it from everywhere, and it’s little wonder the natives considered it special. It’s also a great place to visit.

You can, for example, fish and hike and ski and enjoy amazing scenery and go rock climbing. Or you can ride horses or hot air balloons or bikes or boats through rapids. You can even climb the mountain, which I haven’t done but which sounds relatively simple. Of course, “simple” doesn’t mean “easy”: Mountain climbers like to say it’s a “walk-up,” but it’s a walk up about 8 miles and 6,000 vertical feet, much of it over ice and snow.

Or, this being Mount Shasta, a town which some Californians like to point out is just down the road from Weed, you can go on a Vision Quest with a master shaman. One ad for this service offers “purification, earth healings, shamanic teachings, pure air, water, food, camping, backpacking.” After which, I would assume, a massage with some chanting and oils would be nice. Or perhaps some hypnotherapy. Or a sweat lodge. All these — and much, much more — are available in Mount Shasta.

I noticed the full range of accommodations and restaurants in town, including the clean and friendly Alpenrose Cottage Hostel, where I spent a comfortable night among the ever-fascinating hostel crowd, for $15. And if you walk down to the bar at night, and make a little conversation with some of the locals, you just might enter into a whole new world of knowledge.