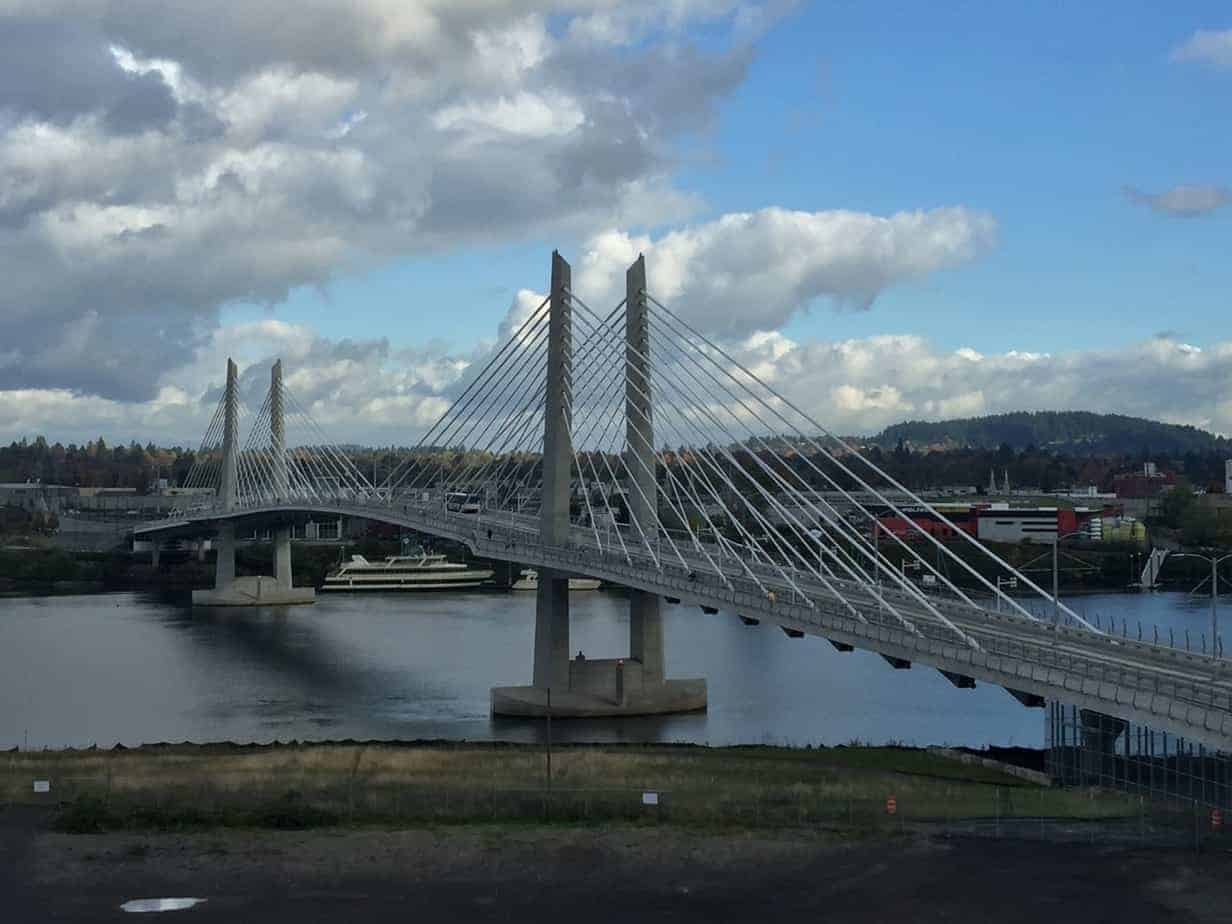 (Editor’s Note: This post is originally from November 16, 2015; the Orange Line isn’t exactly “new” anymore, but these walks are still lovely.)

Now that Portland has its new MAX line up and running, I thought I would check out some of the best places to go for a walk along the new Orange Line.

The new Orange Line starts in downtown Portland (where it continues from a Yellow Line), then follows new tracks south of Portland State and down to the South Waterfront. It then crosses the new Tillicum Bridge, stops near OMSI, and eventually parallels SE McLoughlin Blvd. all the way to Milwaukie.

What we did on this walk was get off in South Waterfront and walk a few minutes to a new section of the Willamette Greenway Trail, then walk over Tillicum Bridge, then take the train again to Downtown Milwaukie, where we walked a bit before exploring the town’s renovated riverfront and then followed some of the Trolley Trail to the end of the line. Then we took the train back.

So here are a few highlights from available walks along the new Orange MAX Line.

When you get off at South Waterfront, the stop just before Tillicum Crossing Bridge, the first thing that’s nice is to walk into the OHSU office building there and head for the public observation deck. It has a great view (left) of the Tillicum Bridge.

Next, walk along Moody Avenue to the OHSU building with the tram, passing by a new food cart pod and some restaurants and shops along the way. Circle around the left side of OHSU and head for the river. Here, you’ll encounter the newest section of the Willamette Greenway Trail, which runs (with only a couple of breaks) from downtown to the Sellwood Bridge.

The new area is a great addition, with landscaped walkways and platforms to admire the river, plus a long ramp that goes right down to the water’s edge:

and then the river dropped the real thing just below!

Next Stop: Walk Over the Tillicum Crossing Bridge

Nothing complicated here: Just head over the bridge! It’s the first one built over the Willamette since 1973, so for most of us, these scenes were never before available:

Over at the far end, in addition to OMSI and all that it offers, you can walk down and under the bridge, where you connect north to the Eastbank Esplanade and south towards the Springwater Corridor.

Then we just headed back up to the station and caught the next train to Milwaukie.

Walk #3: Downtown Milwaukie and the Riverfront

Milwaukie has spent a tons of money revamping its waterfront on the Willamette, and they did a great job. There’s a nice big park, walking paths, and this pleasant dock on the river:

From the waterfront, just walk south along the river, past some nice viewpoints back towards Portland and Council Crest:

Eventually you enter a neighborhood along the river south of the park, with some lovely houses. At the end of the street, you come to a park from which you can access Elk Rock Island, a fairly little-known island in the Willamette which you can walk out to at low water times. When we visited there was construction going on, but I have been there before and wrote a blog post all about it.

From that park, just head east to River Road and down it to the walkway along the MAX line. Turn right on that and enjoy some fun artwork and other things on the way to the Park Avenue station, which is the end of the line.

That paved section of walkway is also part of the six-mile Trolley Trail clear down to Gladstone.

Read all about my Portland hikes

or my hiking trip to Nepal.

Or sign up for my newsletter for all the latest: