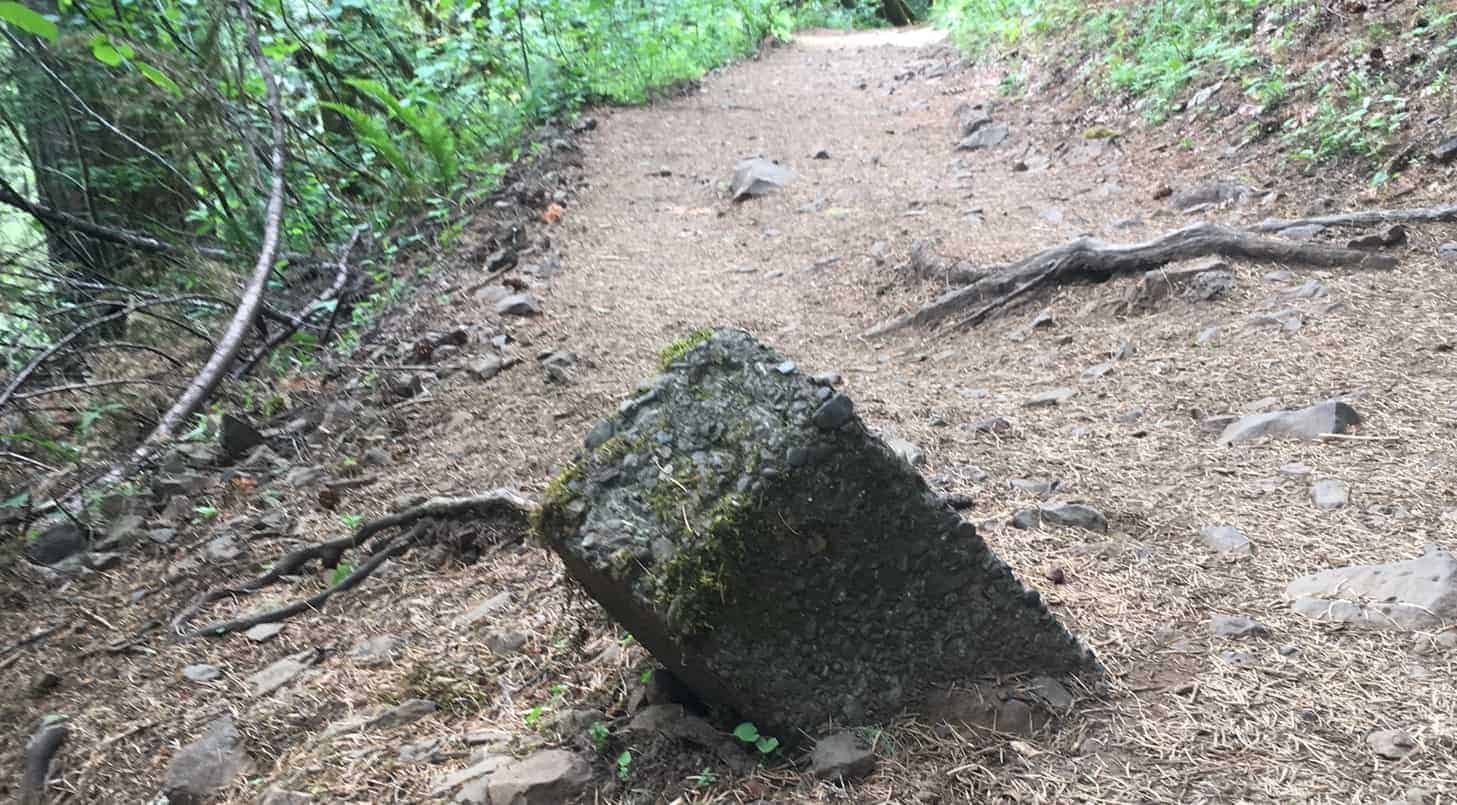 Update: As of January 2018, this trail is closed because of the 2017 Eagle Creek Fire. Check the National Forest website for the latest info.

Back in May, I led a hike for the Trailkeepers of Oregon along the Eagle Creek Trail in the Columbia River Gorge.

That hike, which I wrote up for my blog, was all about trail maintenance and the issues facing trails — the stuff that Trailkeepers is all about. It was also about the history of the Eagle Creek trail, which dates to 1916. It was built to coincide with the opening of the Columbia River Highway, and in fact what is now the hatchery area was then the very first US Forest Service campground in America.

So, if you have ever wondered why Four and a Half Mile Bridge is four miles up the trail, or why Seven and a Half Mile Camp is seven miles up, it’s because in 1916 the trailhead was where the hatchery is now — right where the original 1916 bridge over Eagle Creek still stands. The trailhead was moved in the 1930s, when the construction of Bonneville Dam necessitated the re-routing of the highway (it now goes through the Toothrock Tunnel instead of around it) and the destruction of the original campsite. And that is where we arrive at the subject of this post.

One thing that somebody pointed out to us during that hike really caught our eye: an old concrete mileage marker, barely sticking out of the ground.

You might not even notice it, unless you happen to almost trip over it — at which point you might think, “That’s a funny-looking rock.” In fact, it is the old 3 mile marker, from sometime before the 1930s! It is, however, now just 2.5 miles up, i.e. a little ways past the Punchbowl Falls overlook.

After I put up my blog post, I got an email from a man named Jerry King, who said he had found two more of them! So at this point, I will turn it over to Jerry.

I believe the Milepost 3 has been seen by many people, but the other two seem to have evaded detection until my wife, Nancy, and I went in search of them. We are both amateur historians and hikers; also I was a Land Surveyor for 38 years, so the search seemed meant for us. 🙂

Using my GPS, I zeroed out my track at the modern trailhead at the south end of the parking lot, and we began our walk south. A friend had told us to look for it at 3 miles and that it would be on the right (west) side of the trail, sticking out about 10″. We had gone only about 2 1/2 miles and were just casually beginning to look when Nancy said, “There it is!” We spent some time examining it and discovered that on the chisel shaped top on one side were double arrows and the number 11 and on the back side the number 3 with double arrows, apparently giving the mileage to Wahtum Lake and the trailhead.

So we re-zeroed the GPS and started back toward the parking lot. As we walked, we both said we thought it very unlikely that any others could be found and how lucky we were to have found MP 3. As we approached the former Metlako Falls viewpoint, we stopped to look into the canyon and almost immediately my wife again said, “Is that it?!” And sure enough, lying nearly flush with the ground and surrounded by a large fir root was what appeared to be a broken concrete obelisk base; obviously man made because of the concrete material. We had come very close to exactly a mile!

So we zeroed the GPS again and headed out, still both feeling like it would be very unlikely to find MP 1. Well, as you can see by the photo, we did! We could not discern any numbers on this one, but they might be visible with some excavation and cleaning.

Finally, as we headed out to our car, it became apparent that the 0.00 mile mark was not going to be the modern trail head, not even close! The zero point is about 0.6 miles northwest of the trail head and falls almost exactly as the parking lot roadway intersects the Historic Columbia Gorge Highway.

We are making plans now to continue the search further up the trail. And we have a few feelers out there with the USFS and PCTA to see if we can drum up interest for preservation of these landmarks.

Thank you, Jerry — and Nancy, who appears to have done most of the spotting!

Anybody else know anything about these markers, or found any more of them? Next time you go hike Eagle Creek, maybe keep an eye out at .5 miles, 1.5 miles, 2.5 miles and so on; perhaps we can find and photograph these things, and maybe even work on bringing them back as historic mileage markers.

Jerry & Nancy King are Oregon natives who are always on the lookout for another piece of history. Nancy is the historian for Camp Namanu and Camp Fire (Girls) of Portland. Jerry is a retired Land Surveyor and volunteer searcher/historian for Pacific Northwest Search and Rescue.