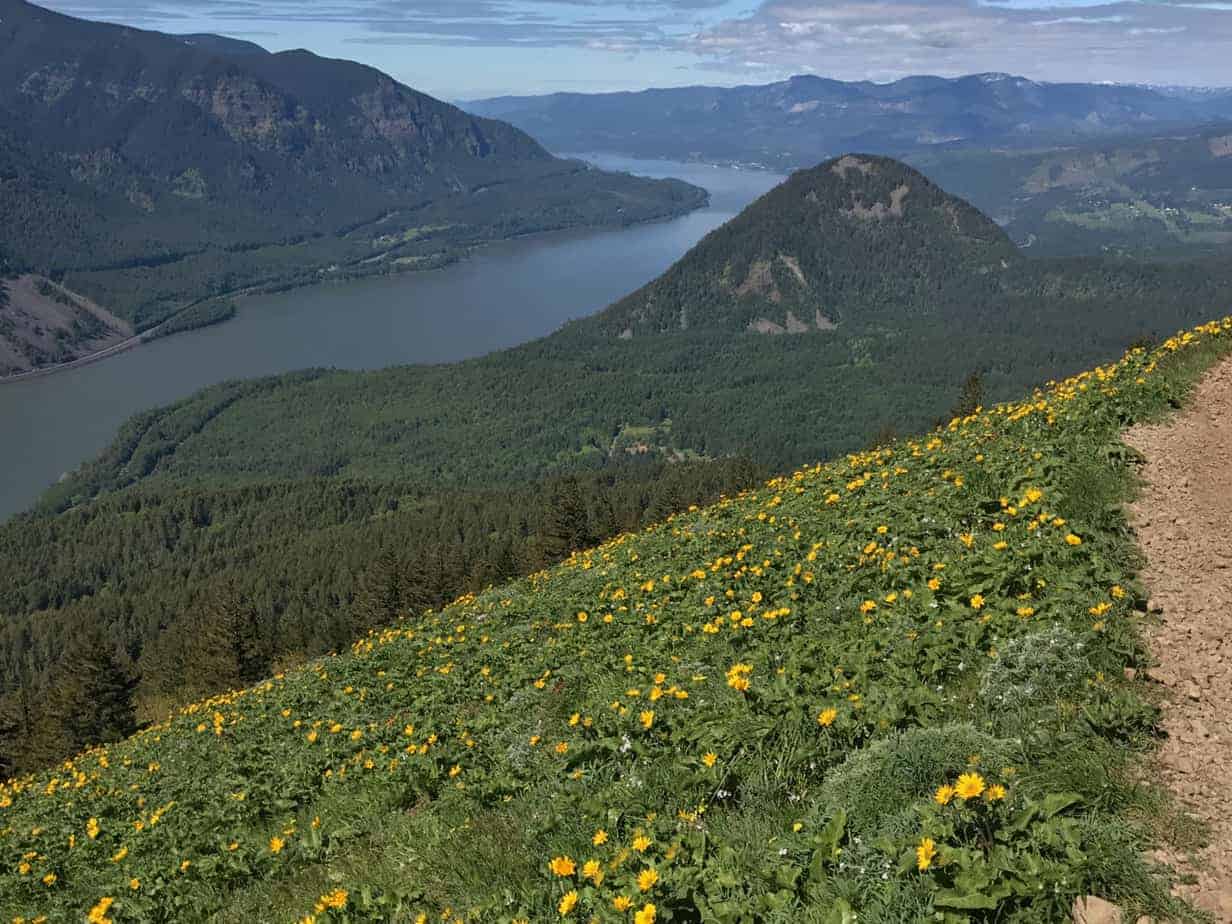 Dog Mountain at peak bloom: Just those words conjure the image of a lush meadow far above the Columbia River, with mountains filling the view, flowers all around you — and rivers of people sharing it with you.

I have an idea about that last part, but we’ll get to that. First, let’s discuss what the Dog Mountain hike is, and why it has become one of the hikesin the Gorge, at a certain time.

Basically, it’s all about balsamorhiza sagittata, aka arrowleaf balsamroot. Somewhere around the third week of May in a typical year — whatever that is — this wild sunflower, maybe two feet high and with several blooms per plant, covers a meadow over a half-mile wide whose summit is nearly 3,000 feet above the Columbia River. It blooms for about two weeks.

It is far from the only flower up there. You’ll see paintbrush, chocolate lilies, lupine (a little later), phlox, all sorts of colors and shapes that I don’t know — and hell, there may be other kinds of balsamroot up there for all I know. It’s just a damn spectacular show!

It is also a pretty stiff climb that will let you know what kind of shape you are in. Or aren’t.

Dog Mountain is also getting to be so crowded that it can, for some people, border on not being fun. But we’re getting to that.

The Trailhead — and the Dog Mountain Shuttle

The trailhead is about 10 miles east of Stevenson, Washington, on WA 14. Over the last few years, it has become an absolute zoo when the flowers are out.

The state has marked spots in the lot and started (allegedly) ticketing people for parking along the highway; there are now 75 spots in that lot, and in the past there would be as many as 200 cars in it!

I did my 2017 hike on Friday May 19; we arrived at 8 a.m. and found a spot easily; when we came out at Noon — remember, on a Friday — the lot was packed, and people were walking down the narrow shoulder of the highway to their cars.

Here is the schedule for spring. The same service runs later in the summer, but it doesn’t look very useful.

The Northwest Forest Pass, or an equivalent, is required to park at the trailhead.

There is nothing too subtle about the hike up Dog Mountain; you start going up, and it lasts for pretty much three solid miles, varying between steep and really steep. If you go the way most people do — up the trail past the bathroom, stay right at a junction about a mile up, then left from the prominent Puppy Point — you’ll get some scenery and flowers on the way up. The gain is 2,700 feet in 2.9 miles. Do the math.

Here is my Gaia track, which you can see in full here.

But my goodness is it worth the effort. I have a whole photo gallery from my hike below, but here’s another sample:

My Idea for Overcrowding on the Dog Mountain Trail

I figure that there’s nothing we can, or should, do about the number of people hiking Dog Mountain. I do think there should be restrictions on parking there on weekends, or at least an additional parking fee and better enforcement. Anything to encourage people to take that shuttle!

But on the trail, there is a better way: Let’s all work together to make Dog Mountain a one-way loop.

Think about it: while you’re slogging up that hill, there are dozens, if not hundreds, of people coming down the other way. What if there weren’t? And what if you didn’t have to come back down the same murderously steep way you went up?

So here’s my idea: Go up the Dog Mountain Trail, like everybody does, and then come down the Augsperger Trail.

The Augsperger Trail goes left from the parking lot, not even passing the bathroom, and wraps around the west side of Dog Mountain. It is almost a mile longer, which means it is less steep. It is also less rocky — and both of those things make it easier on your knees. It’s also shadier, often breezier, and you get some different views on the way down — including literally the other half of the summit meadows!

I actually like to go up Augsperger and down Dog, and that is how I describe it in the 5th Edition of my book, 60 Hikes Within 60 Miles of Portland. I have finally accepted, however, that nobody else wants to do it that way — but I do see people going down Augsperger. Let’s all do it! I’ll be writing it up that way in the 6th Edition, but it boils down to this: turn right just below the summit, left at the only junction you’ll see after that, then carry on to the lot.

For now, here is my photo gallery (click on the first one to scroll through them all).

And I’ll see you among the flowers!