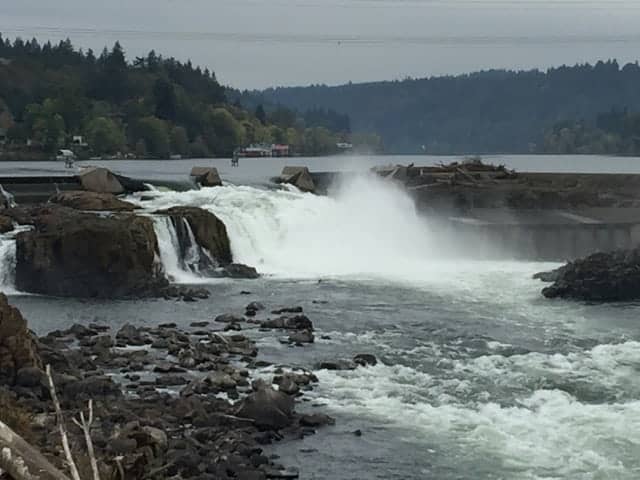 All of us in Portland are aware of Willamette Falls, but how many of us have really seen it?

And we all know that there is an old paper mill there that’s closed, but how many of us know about the massive riverwalk being imagined and designed for that site?

You can now take a tour of the Willamette Falls area in Oregon City, a tour which will take you into both of these worlds: as close to the amazing falls as you can get, all through the sprawling industrial site, and into the fantastic plans afoot to transform it into a riverwalk that will be one more thing to put our area on the map.

The site was abandoned in 2011, when the Blue Heron Paper Company went out of business after more than 100 years on the site. They left numerous buildings, including a foundation that dates to the 19th Century, along the south bank of the Willamette. The River was dammed at the falls years ago to generate electricity; those falls boast, at peak levels, a greater flow of water than any waterfall in America, other than Niagara Falls.

Here is an up-close video of the falls, from a viewpoint in the tour but otherwise cut off from the public:

Here, by the way, is a great video about the history of the falls:

All of this is impressive enough, but the grand plan for the site — a multi-use riverwalk development of business, residences, viewing platforms and wildlife habitat — is nearly mind-boggling. It’s a partnership between Oregon City, Clackamas County, Metro and the State of Oregon, working with several tribes as well as Portland General Electric, a private firm that owns the site, and a nonprofit called Rediscover the Falls.

Right now the project is in a design phase, with some money already in place and initial design to be completed in 2017. Construction wouldn’t start before 2018, and even the project’s literature doesn’t hazard an opening-date guess.

But it’s possible to take a tour of the site right now, to see the historic structures, get as close to the falls as the public can, and learn more about the incredibly ambitious plans being hatched. I can’t recommend this tour enough.

You can set up your own private group or attend a regular public tour on Fridays. For more information on tours, contact Kelly Reid of Metro. To find out more about the project, see rediscoverthefalls.com.

If nothing else, it’s worth taking the tour just to get this up-close view of the falls. Plenty more photos and videos below.

I recently took the tour of Willamette Falls and the old Blue Heron Paper Mill with a hiking and walking group that I work with, and here is a photographic tour from that day.

I didn’t take notes or anything, so a lot of this is from memory, but I hope you’ll get the idea.

The highlight for most people, of course, is that actual view of Willamette Falls. There’s actually a long dam over the whole thing, with the water flowing mainly through a slot in the middle. On the tour, you get to walk out onto the dam, admiring the river and many side falls up close, and then reach a building with a front-row view of the falls.

I made these next three big, for proper effect:

And finally, here’s a video of the whole scene from the roof:

It’s a really amazing place, and I encourage everyone to get on a tour — either through a private group or with a regularly-scheduled tour. Check out Rediscover The Falls for more info.

Read all about my Portland hikes

or my hiking trips to Italy and England.

Or pick up a signed copy of my book,

60 Hikes Within 60 Miles of Portland.