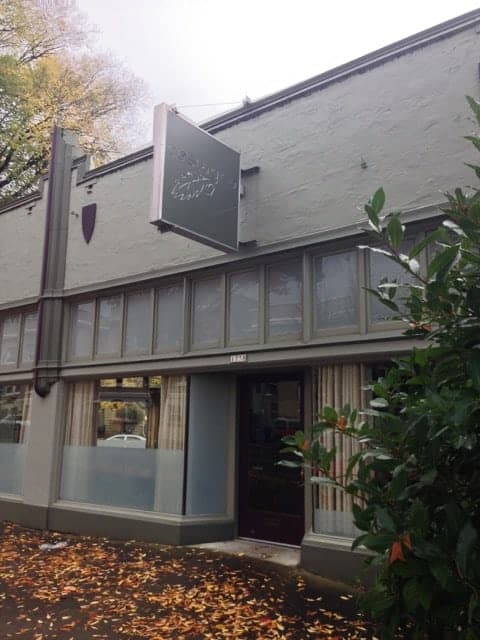 One of the weird things about being the Portland Breakfast Guy is that I don’t get out to eat much after noon. Even the best-known restaurants in Portland probably won’t be seeing me unless they start serving brunch.

So it is that after all these years I finally made it to Castagna on SE Hawthorne Blvd.

Well, okay, I really only made it to Cafe Castagna, next door. Still, if, like me, you have only heard of Castagna and not actually eaten there, allow me to make an introduction of sorts. That is, allow me to copy and paste some stuff I found on the Internet.

By all accounts, chef Justin Woodward is on fire. The inventive chef picks up where culinary wunderkind Matt Lightner left off, deftly continuing Castagna’s reputation as the pioneer of the local “au natural” culinary movement: Greens and flowers are foraged by the chef himself, then presented in a molecular style that reveals an authentic expression of the chef/artist at work. Order up the tasting menu, sit back, and try not to whip out your camera phone as one beautiful plate after another arrives.

I don’t really know what it means to serve up greens and flowers “in a molecular style,” but it is clear that Castagna means something in the Portland restaurant scene. Mr. Lightner, whom I wouldn’t recognize were he to appear in my kitchen making an omelette (though I’d want to know who the hell he was), is now off in New York City, earning rave reviews.

Buy Portland’s only all-breakfast guidebook, Breakfast in Bridgetown, straight from the author today!

I invited a couple of friends, and they invited a couple of friends, and off we went to right this great culinary wrong. Indeed, none of us had been to Castagna! One thing that did happen, which I believe to be a first in my Breakfast Crew outings, is that a BAND showed up! That’s right, an entire band — and a surf rock band, at that. No, they didn’t play, and yeah, there are only two people in the band … but still. I had breakfast with a surf rock band, called Crushed Out. And it’s really too bad they didn’t play, because apparently some crazy shit goes down when Crushed Out rocks out:

Right, so, breakfast. Castagna is a pretty plain-looking place on the inside, so much so that I forgot to take pictures of it. (I’m out of shape on this). As for what kind of place it is, they say this on their website:

Castagna is where modern sensibility meets natural ingredients for a sensory experience that defines a new Northwest cuisine. The restaurant serves as a clean, calm, modern canvas on which to showcase an artful presentation of food; a series of tastes that elevate the senses and reinterpret local cuisine.

Again, not entirely sure what all that means. But I am ignorant, and rather a smart-ass, so let’s move on. Here are the two sides of the menu, which you can also check out online:

After having a chuckle at the hempseed and walnut granola — oh, Portland — and asking what a few things meant (shakshouka is poached eggs with stuff in them), we ordered up. Guitarist Frank wanted a burger but couldn’t pull the trigger on that at 10 a.m., perhaps because he hasn’t seen 10 a.m. since the tour started? Moselle, who by the way is quite quiet, and even shy, when she isn’t banging on the drums and tossing her (longer than I realized) hair around, got the salad of frisee, crisped poached egg, lardons, walnuts and pomegranate ($11), which looked amazing:

Robin, maven of of the Meetup.com PDX Breakfast Club, got the chantarelle, new potato and chevre frittata ($11), which also looked amazing:

As for me, I nearly quit reading the menu at “Eggs Benedict with house-made lamb ham.” I mean, why go past the Benedict, in the first place? And in this case … lamb ham? As much fun as that is to say (and I said it often), how can you not order that? Me and the guitarist both got it, thus making me 1.7% cooler.

And my benedict was really good. The sauce was light and airy, I’d almost say “frothy” but that doesn’t sound like a cutting-edge restaurant that redefines something. It also may have been molecular, I don’t know. But it was good. The lamb ham … lamb ham! … was fine but not great. A little chewy at times, which might be what lamb ham (!) is supposed to be like. The preparation was all perfect, and the service was nice, and the company outstanding. And there was no line, 10 a.m. Sunday on SE Hawthorne. So there’s that.

I have probably eaten in way too many restaurants, because it takes something really over the top to make much of an impression on me. And honestly, this brunch didn’t. It was good, not great, certainly not amazing. It was also pleasant, reasonably priced, and in a cool neighborhood with free parking right in front. All excellent points.

And hell, if nothing else, I finally made it to Castagna. Sort of. One more off the list. Maybe next I’ll go to this Burgerville place I keep hearing about. Okay, that was a joke.

Buy a signed copy of Breakfast in Bridgetown or one of my other books — including 60 Hikes Within 60 Miles of Portland — in my web store.

Or maybe join a hiking and eating trip to Italy!

And thanks for stopping by …