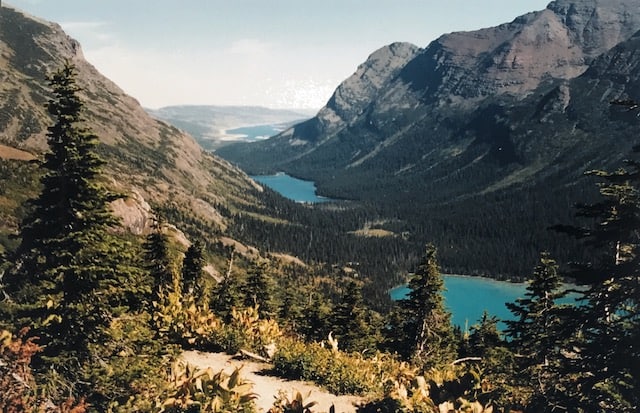 In September 1999, I rolled into Glacier National Park with a friend to do some camping and hiking. We didn’t realize the place was about to shut down, at least in the human sense.

As most of the folks cleared out, we stuck around, and had a somewhat goofy night in camp followed by a magical hike in the mountains. It felt like we had stolen a day from the encroaching winter.

This article originally ran in the Memphis Flyer of October 14, 1999.

The chill of winter had yet to arrive, but there was a nip to the air. The winds of autumn were whipping across the eastern slope of the Rocky Mountains. The creeks were running low and slow. The aspen and birch were ribbons of gold laid on green carpets, wrapped around shimmering mountains.

We stopped in Babb, Montana, a town of seven buildings, to get ice, beer, firewood, and gas. We were going camping in Glacier National Park.

“You folks headed up into the park?” asked the guy at the general store. “You know they’re closing up, don’t you? You can still get in there, but the hotel’s closed and the rangers are about gone. Winter’ll be here soon.”

The date was September 21st, sunny and in the 50s.

All around us were signs of imminent departure, or of hunkering down. The kid who sold us beer across the road said he’d be gone in two weeks: “Back to Michigan for a couple of months, then just see what happens.” The lady at the gas station said January in these parts is “about 50 below and hundred-mile-an-hour winds. You plan your day around following the school bus, ’cause they always plow for it.”

We drove in to the Many Glacier Campground, past an empty Park Entrance Station, and set up our tent. A hundred and something campsites, maybe 20 occupied. A ranger came by and greeted us.

“Now, you folks know this is our last day of regular operation, right? Starting tomorrow, we’re locking up the bathrooms and turning off the water. I’m going home to see my kids. You can stay as long as you want, till the snow comes, and it’s half-price from now on, $6 a night. Yep, tomorrow at noon, this campground’s going primitive.”

Going primitive. We had a sense of being alone, left behind to fend for ourselves while the leaves fall and the temperature drops. That night in the tent, every sound outside was imminent death. The wind in the pines was bringing blankets of snow. A pine cone hitting the ground was a thousand-pound grizzly coming for us. A kid screaming at another campsite was the Blair Witch.

We awoke to another clear and sunny day, but a morning when a fire was needed and coffee much appreciated. We were going hiking, up a trail recently reopened when “grizzly activity,” as the ranger put it, had become “less intense.”

“They’re feeding almost 24 hours a day now,” she had said, “fattening up for hibernation.”

If that wasn’t enough to spook us, signs at every trailhead finished the job. “Prime grizzly habitat … dangerous and unpredictable animals … never hike alone or at night … make noise constantly to avoid startling them … keep small children close at hand.”

The Fear hit right behind the sign. Attack seemed inevitable. Every hiker-to-hiker conversation included the big question: “Seen any bears?” Early reports included one of a large bear standing up and snorting at someone, on this very trail, just yesterday. Nobody’s seen one today, though. But keep making noise.

No problem there. I talked constantly, or sang; my buddy blew a whistle whenever we approached a stand of trees or tall bushes. We found out later that a whistle’s not a good idea: It sounds, to a bear, like a small animal called a pica. A source of protein for that hibernation.

Up the Grinnell Valley we went, singing and whistling, along alpine lakes and under tall firs and through the same stands of berries the bears were there for. Huckleberries the size of large marbles, sweet as a cup full of sugar. A bear, we had no doubt, was lurking behind every bush.

Fear was in my heart, but my camera was around my neck, lens cap off and ready to go. Images of my camera being found in the spring, the last photo taken of a grizzly’s roaring mouth. For good or ill, we never saw a single bear. Got a decent shot of a mountain goat, though.

At the top of the valley, 5 miles and a couple thousand feet up, we caught up with a ranger-led hike just short of Grinnell Glacier. It was the last ranger hike of the season.

We knew there was a glacier up there; what we didn’t know was there was also a massive lake, drained by a waterfall of several hundred feet, with another glacier and waterfall above it and a 2,000-foot rock wall encircling the whole scene. It was a surprise present after a long day.

We sat in awe, under a blue sky, the chilly wind blowing up the valley behind us. The Bear Fear, and the sense of being left alone, gave way to a happier thought: This is a stolen day. We took it, and its privacy, from the hordes who took their kids back to school. We snatched it from underneath the approaching darkness of winter. We tucked it away and ran off, while we could still get out, before the snows came.

We were among the lucky few, the ones who snuck in under the wire, went primitive, and had the place to ourselves.