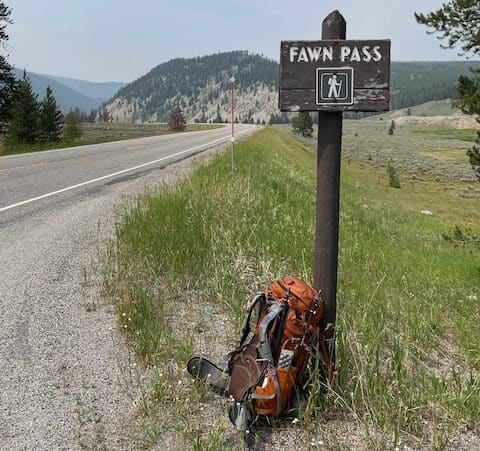 I don’t necessarily believe that the universe, or God, or gods, or The Way has a consciousness and some kind of plan, much less for me. It’s temping, though. I mean, which world do you want to live in? And is the world around us not defined, at least for us, by our thoughts?

All I know is that sometimes life throws at us something that sure seems like a sign. Or maybe a confirmation you’re on the right path. Or just something so damn nuts that you can only stare at it in disbelief and wonder what, if anything, it means.

Right, so I was on a backpacking trip in Yellowstone, and it was a trip I had planned for months. This was one of The Big Trips I had planned for my summer in the Rockies, a 50-mile solo loop through and around the Gallatin Mountains in the northwestern part of the park.

This trip would be my defining big moment of the summer, a long-dreamed-of epic adventure in a wild land. But early on the second day, out of six, I was not feeling that way about it.

Maybe it was the heat, which was rough, or the smoke, which was intense, or the bugs, which were annoying, or the loneliness, which made the end of the first day seem just … sad. Change any of those things, and it might have been great. Instead, I felt like I was doing it just because it’s what I had been planning to do. And so, on that second morning, I was thinking about bailing out.

Normally, in response to the “I should quit” voice, another would rise up in my head and say something like, “Don’t be a quitter,” or “Don’t be a pussy,” or “It’s gonna get better.” Or something. But not this time, not with any real conviction. The honest, unavoidable truth was that I was hot, tired, lonesome and bug-bit. I wasn’t having fun. I was going through the motions. And the second day was an easy one compared to where I was headed: over two more passes and into higher, dryer, bear-filled country.

All this, and I knew that on the second day the trail would take me about a mile and a half from a US highway on the west border of the park. That would be about 20 miles and one mountain range away from my car, but only about a half-hour’s drive from a town. With hotels. And somebody, I was sure, who would give me a ride to my car.

Thus began the dance in my head. Quit, don’t quit. Go a little farther and decide. Just bail out. Maybe tomorrow. See how I feel. I hated to quit, but I didn’t really want to go on. But maybe it will get better.

It wasn’t difficult, just a little … muddled. Finally, I said to myself, “Let’s just go to the junction down by the road, and maybe some nice day hikers will give me a ride. Or there will be some kind of sign.”

A little while later I got to the junction, and I stood for a moment wondering, do I take the new trail, head for the road, what? What is it I want in this moment? And then I heard a woman talking, coming up the trail. First person I’d seen or heard in two days, by the way.

So I waited. And up the trail they came, two women hiking towards me. As they got closer, the one in front looked … familiar? My brain was still trying to process the incoming data when she looked right at me and said, “Paul Gerald?”

It was a friend of mine from Portland.

A friend from Portland, walking up the same trail in Yellowstone National Park that I was walking down, at the exact moment I was wondering which way to go. All I could think to say was, “Holy shit!”

We hugged, and we gawked at each other, and we both said several versions of “I cannot believe this.” And how could you believe it? I know it’s all math, and probability, and whatever, but come on: I was thinking maybe I’d catch a ride, in a place where I hadn’t seen a human for two days, or maybe get a “sign” of some sort, and this happens? Okay, universe, you have my attention.

After we caught up, they offered a ride into town if I couldn’t hitch it, which they were confident I could do. Either way, we would meet up that night or the next day or something, because hell, we have to! We’re both in Montana and just bumped into each other on a trail, for f— sake.

So they went on with their hike, and I went down to the trailhead, propped my backpack up against the trail sign on the side of the road, and started hitching. And 15 minutes later, a guy rolled up and said he’d take me into town. Then, when I told him what was up, he said he would take me to my car! He refused my offer of payment, and we had a nice little afternoon of touring in the park together on the way to my car.

About three hours after my friend walked up that trail, I was in my car headed home for a shower, honestly wondering for a moment if maybe I was actually lying in my tent in Yellowstone, having some kind of fever dream. Cra. Zee.

The next day I met my friend, we shared a hotel room, stayed up half the night getting caught up, then went for a hike together in the morning.

Then she headed for Portland, and I headed back into a world in which, sometimes, you open yourself to a possibility that isn’t the plan you had made and gotten attached to, but then the “whatever or whoever” sends a sign that says, “Yes, that’s the right path. Take that one.” Even, apparently, when that path is called “quitting.” Because sometimes, quitting is exactly the right thing to do.

At least, that’s what I have decided to believe about a friend from Portland walking up to me on a trail more than 800 miles from there, at the exact moment I was looking for a “sign” and trying to decide what to do, and we could have missed each other by a minute in a dozen different sets of circumstances, but we didn’t, and then I was on my way out of a not-great situation and easily, smoothly into a better one.

So yeah, I take that as a sign. And another thing to be grateful for as I travel on down the path.