Help Me Out With a Little “60 Hikes Portland” Book Research

So I have this team of experts working on a marketing plan for me, and I was telling them the sales history of my book, 60 Hikes Within 60 Miles of Portland. 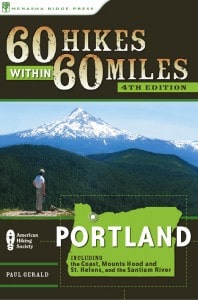 The basic history goes like this: Came out in 2001, did fine. Second edition in 2004, also did fine. Third edition in 2007, did fine, and then two years later, summer of 2009, it went to #1 on the Powells Books nonfiction list. This was ahead of Michael Pollan and Barack Obama! I was blown away. It stayed on the Top 20 list for months, many of them at #1, and became the best-selling book nationally for Menasha Ridge Press — two years after it came out.

In 2010, when the Fourth Edition came out, it simply took its place on the Top 20 list and has mostly stayed there. 60 Hikes is now the best-selling hiking book in the Portland market, with something like 18,000 copies sold for the current edition.

And that’s really cool, thanks!

So here’s the question: Why?

And here’s how you can help. In a comment below, let me know why you bought my book instead of any of the others. What do you like about it? Did you used to buy another book and then switch to this one? I know 2009 is a long time ago, but what do you think happened? How do you approach the decision to buy a hiking book, and where do you wind up buying it?

A lot of questions, I know. Just post whatever comes to mind, and you’ll be entered to win a $25 REI gift card. Easy cheesy!

Okay, have at it. And I’ll go back to working on the 5th Edition.

Tamanawas Falls: A Mount Hood Hike for the Whole Family