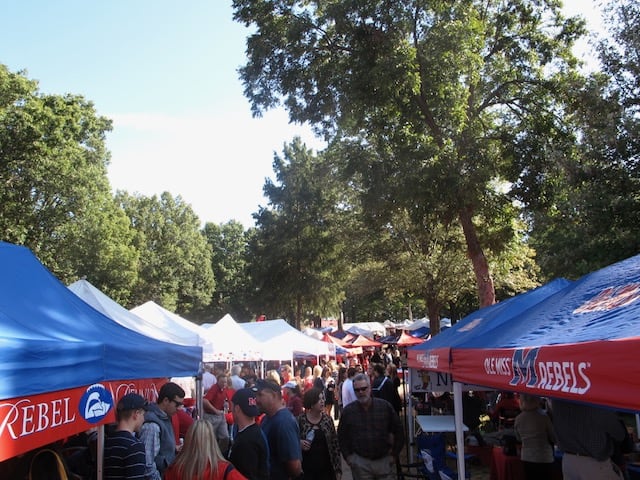 Here’s another Memphis Flyer travel column from back in the day, this one from 1999. I took a Texas friend to a football game at Ole Miss, known formally as the University of Mississippi if you didn’t know that.

And while the column was written more than 21 years ago, I doubt much has changed at Ole Miss, at least in terms of the football party. The team has gotten worse, but the party probably only bigger. And they moved the confederate soldier statue from the middle of campus to a Civil War cemetery.

Otherwise, it’s Mississippi, so things change slowly, if at all.

So enjoy your little trip down to Oxford with me and Sara. And just assume it’s about what you’d see now.

This article originally appeared in the Memphis Flyer of September 30, 1999. I believe the opponent was Arkansas State on September 11, 1999, a 38-14 win for the Rebels.

An almost too-big party, way down south in the town of Oxford.

I took my friend Sara, from Dallas, to a football game down at Ole Miss. That somebody from Texas could suffer a form of Southern-culture shock says something about what kind of place Ole Miss is. On close to a dozen occasions, she muttered “Oh my God, I can’t believe this.” And believe me, it wasn’t about the football team.

If you’ve never been to Ole Miss on a football Saturday, you really should go. No campus anywhere is without tailgating. But no campus anywhere has The Grove, either. The Grove, we decided, is like the center of a tailgating solar system — or maybe a medieval town where the elite is centrally gathered in tight security and the poor are scattered hither and yon.

Sara and I had to park halfway across campus, so we approached The Grove through the “outer” partiers, the crowd with nothing better than KFC or chips and dip being washed down with Coke and Sprite. But as you get closer the food gets up to homemade, headed for elaborate, and the number of plastic and Nerf footballs in the air attained the level of dangerous.

The first time we saw a little girl, about 8, wearing a Rebels cheerleader outfit, Sara wanted a picture. By the time we had seen about 30 of them, she mumbled her first “Oh my God.”

Another “Oh my God”: the statue near the Lyceum, honoring “our Confederate dead.”

As you get into The Grove itself — a hilly, wooded area, which on non-football days is probably a calm and peaceful place — the first things you see are the tents. People start setting up in The Grove at first light — tent poles and Bloody Marys — and by three hours before the game it’s full-bore.

You start in, admiring the very serious setups people have: the Rebel tablecloths, the flower-and-flag arrangements, the homemade cakes and pies, and multi-course meals. Then the sound hits you. It’s a combination of loud greetings, music, radio highlights from past Rebel triumphs, and the live broadcast of the Mississippi State game. If the Soviet Union came back to life, formed a football team, and scored a touchdown against State, The Grove would erupt into cheers instantly.

There’s a constant calling-out in The Grove, and Sara mumbled another “Oh my God” about the 40th time she saw two women hug each other in that certain barely touching, shoulders-only way (save the makeup!) and scream at each other, “Oh HAI-eeyyy! Hahr yeewwwww? Yew look SO cewt!”

Of course they look cute; they all look like each other. There’s a mysterious force at work at Ole Miss, a force by which all the female students wind up, at the very first game, wearing exactly the same thing. I don’t know if it’s a committee or mental telepathy or instinct or something that gets worked out in preseason sorority parties. This year it was the black sundress, with lengths ranging from ankle to barely legal, and black sandals. Last year it was the skirt with horizontal stripes. Even I let out an “Oh my God” when we encountered a pack — is that what you’d call a gathering of coeds? — of girls, seven of them, with seven black sundresses and seven pairs of black sandals.

A mutual “Oh my God”: At one point, I must admit, Sara uttered a very close equivalent to something I’d been thinking: “Man, I wish I were 10 years younger. Some of these boys are so cute.”

Then there’s the boys’ dress code: Sara didn’t believe me, or thought I was exaggerating, but the boys all wear ties to the game. Ties! Sara wanted to know why, but I couldn’t really say.

Faced with all the Docksiders and khakis and Izods, Sara said, “Oh my God, I feel like I’m back in the ’80s.” It didn’t help that the Rebel band’s halftime show included a medley of hits from Foreigner, Kansas, and Styx.

Everybody wants to know if they still wave The Flag at Ole Miss. Well, some of them do, but it ain’t like it used to be. Most of the students don’t carry them. The Powers That Be did an absolutely wonderful thing there: When they ran into First Amendment hassles over barring the Confederate flag from games, they put their heads together and came up with a whopper: Ban sticks! I’m serious. They sell pom-poms with little plastic handles, and that’s it.

Next target: “Dixie.” The band has already abbreviated it, and it can’t be long before it’s gone for good. Any coincidence that at the end of the third quarter the band always plays “I Saw the Light”?

A cultural note: Other than most of the football players and concession stand employees, the only black person we spotted in a crowd near 50,000 was in fatigues and loudly trying to sell somebody tickets for two seats together on the 40-yard line.

I have to give the folks at Ole Miss credit, though. They’re good at throwing a party, and they’re eternal optimists when it comes to football. This year’s team looks like a 7-4, maybe, but the folks in The Grove don’t agree, or don’t care. I’m not even sure all those people even go to the game. And why should they? They’re safe and sound where they are, right in the middle of their own little solar system.