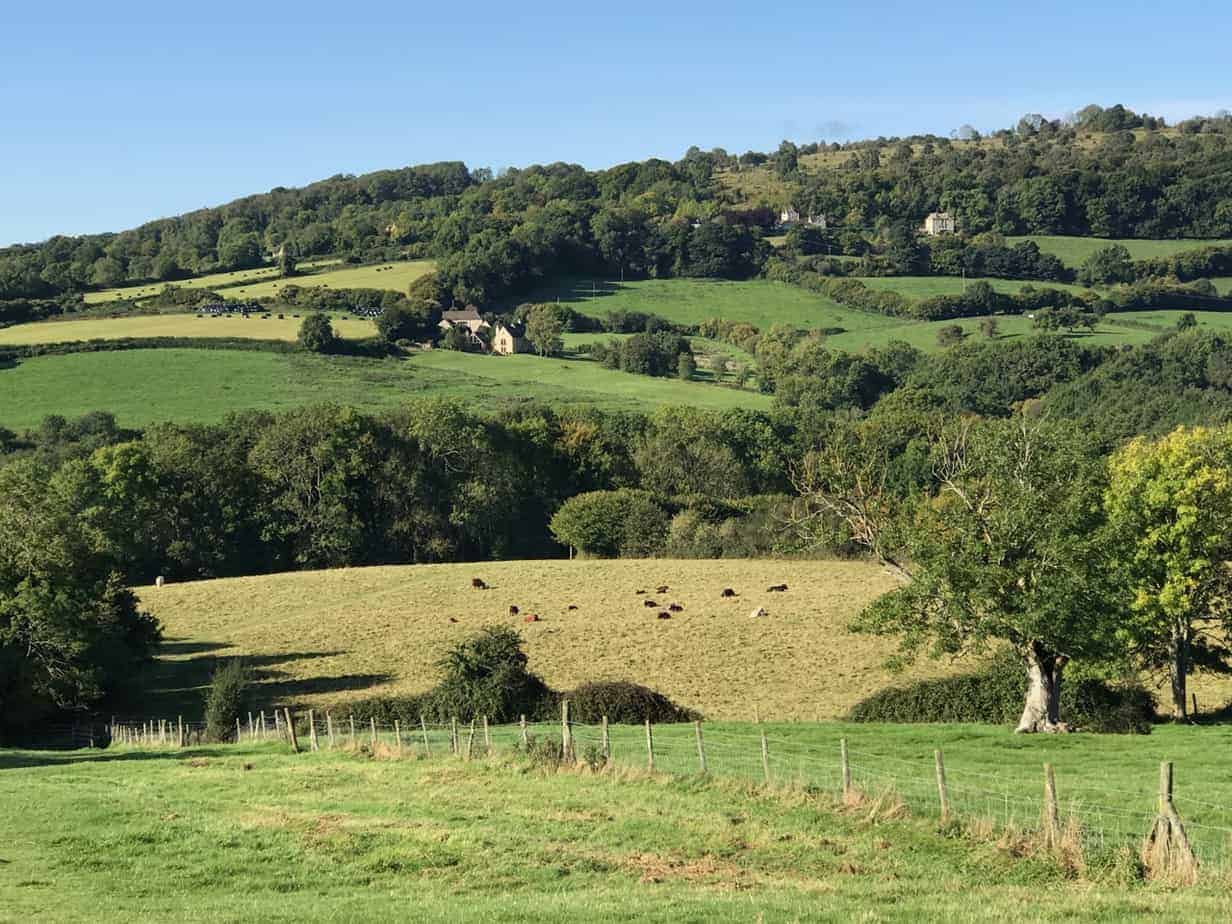 In September, I took a break from my latest English soccer tour to fulfill a longtime dream: I took a walk on the Cotswold Way. Here is a brief description and photo gallery.

About the Cotswold Way

The Cotswold Way is a 102-mile path which at times is along roads and other already-established trails. It runs all through an area called the Cotswolds, which are pretty much the quintessential English countryside; rolling hills, stone cottages, meadows full of sheep and cows, patches of forest, and incredibly quaint villages.

It had some history in the industrial revolution as a center of wool production, but today it seems to be mostly about tourism and preservation — and soccer, by the way. The reason I was there was to see Forest Green Rovers, a club from the village of Nailsworth (population around 6,000) that made the professional English Football League in 2017, for the first time in their LONG history. You can read about that wonderful experience here (coming soon).

Many people hike the whole Way, usually in about 10 days, and usually with some level of support. Most commonly, this is you picking the days you want to hike, and somebody laying out the schedule for you, booking your hotel rooms, and arranging for your luggage to be brought around to the next town. It’s pretty chill.

I was doing an eight-mile section that I picked mainly because it was the most convenient for where I was staying. I didn’t have a car, so I was using public buses, which works really well there. I had breakfast in Nailsworth, took a couple of buses to a village called Painswick, and started my southbound walk there. I came out a little over four hours later at King’s Stanley.

Full confession: I was in such Soccer Mode, as opposed to Hiking Mode, that I hit the road without snacks, water, or a map! Not proud of it, but there it is. Also, I forgot to charge my phone, so by the end of the walk I was down to like two or three percent and occasionally needing to check Google Maps. That’s because the signage along the Way is either not so good or it depends on people having maps and not being dumbasses. A couple of times I had to rely on my well-worn sense of directions, Anyway, I made it just fine.

Here is a video from the high point of my walk, a place called Haresfield Beacon:

The little piece of a guide I used was amazingly lame, though. Granted, I just grabbed it off the Internet the night before (see the above re: dumbassery), but it would say stuff like, the path goes through the woods and then drops down to the valley and a town … when it was like a mile and a half through the woods, with multiple junctions, and the “town” was really more like a village we came close to, rather then entered. And some of the junctions just had nothing!

It would also use words like plunge down and climb steeply for hills that were like 400 feet high. I guess I have a different standard for such things, having hiked so much around my home in Portland, Oregon.

Along the way, I met lots of locals out walking their dog, one couple who were walking the whole thing to practice for the Camino de Santiago, and lots of other folks just out for a stroll. The age definitely trends a little higher than, say, a hike back in Portland.

Two stand out: a lady with two canes and two dogs, a spaniel and a retriever named Perry. All three were friendly and lovely. Another woman had two collies from a working farm, so when she said to stop they both stopped on a dime, lowered their ears and looked right at her, until she said go, and then they took off like the wind.

I wound up at a pub, naturally, called the Kings Head. It was a tad lame, not exactly historic and charming, and they were out of the soup and the fish and chips, which I had only been thinking about for like three hours. But I had a nice chat with a Canadian couple who were hiking the whole Way, and then I talked with a local about some of the football clubs around, and then I hopped a bus back to my village.

Such is life when walking the Cotswold Way.

Here’s a photo gallery. Just click on the first image if you want to scroll though them.