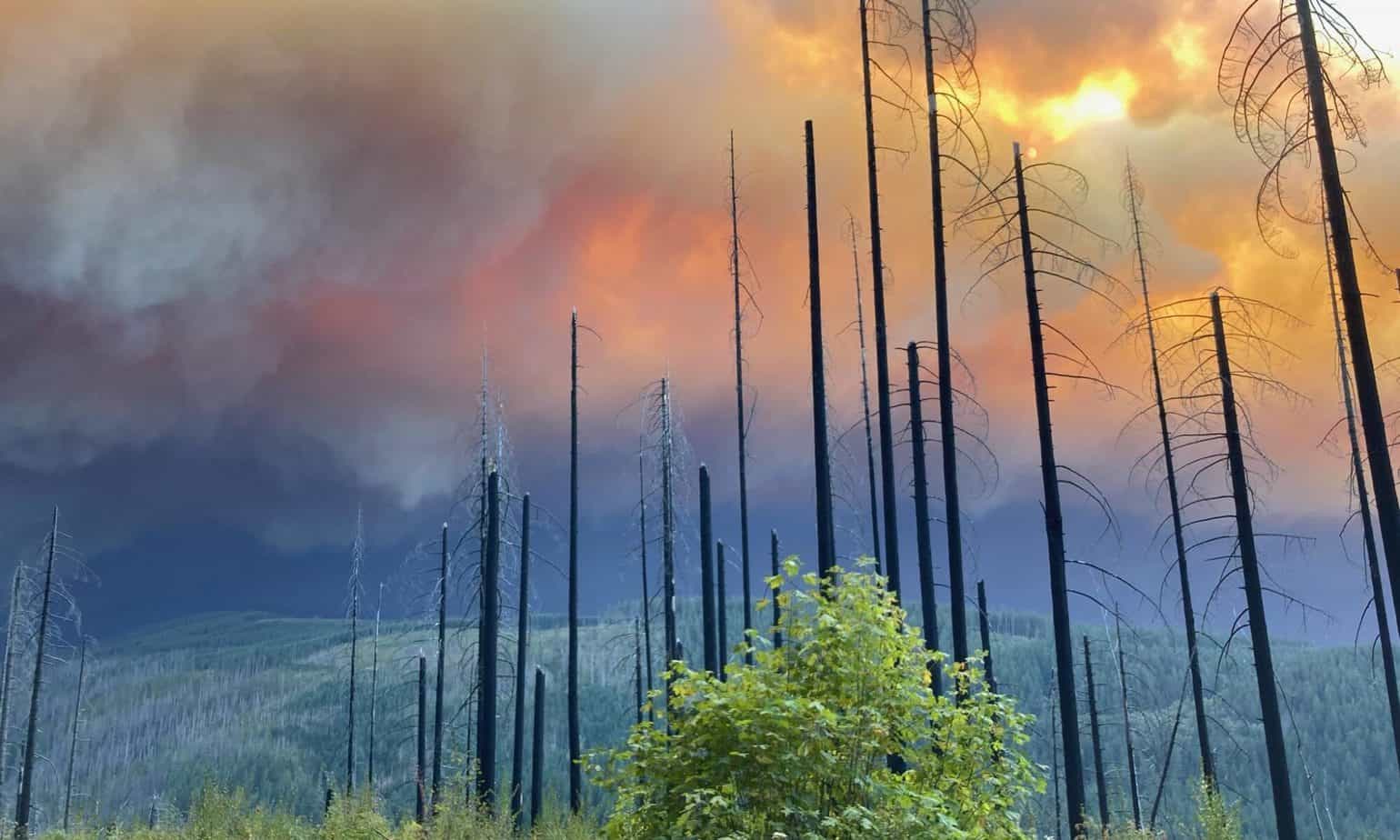 Here is an ongoing attempt to evaluate which hiking trails and campsites are within areas affected by wildfires in Oregon and southwest Washington in 2020.

This is not an official or complete list, just one person’s attempt to track it all. I don’t have access to any more information than what’s publicly available.

MAJOR, CRITICAL DISCLAIMER: Just because a spot is within the area affected by a fire, it has not necessarily been burned to the ground! I cannot overstate the importance of this. Many fires skip around, burn only along the ground, and behave very differently from one area to the next. When the media says a fire is 35,000 acres, that does not necessarily translate into 35,000 acres of total destruction. Places within a burn zone could survive intact, be damaged … or be burned to the ground. We won’t know for a while.

Did I miss any, or do you have any questions? Drop in a comment below or shoot me an email.

This is by fire, north to south.

Started in Trapper Creek Wilderness, spread west. Currently about 25,000 acres with 40% containment. All indications from the firefighters are that this fire has really died down and is not expected to grow much. The Wind River Road is now open.

Just outside the fire area: Falls Creek Falls is just east of this fire, across Wind River Road (FS 30). Firefighters are working on drawing the line at that road.

The cabins at Government Mineral Springs also appear to be safe at this time.

Started in the Riverside Campground on the Clackamas River, spread very quickly west, to within a half mile of Estacada. As of today, it’s 138,000 acres and 57% contained. This fire has also stopped growing.

And here are officially-released photos.

Hiking Trails Just Outside the Fire Area: Bagby Hot Springs, and its trail as far as Silver King Mountain, is all currently just south of the Riverside Fire but also just north of the Beachie Creek Fire. If this fire spreads east it will threaten Bagby and the heart of the Bull of the Woods Wilderness, which is currently outside the fire area.

Also in the fire area: Ripplebrook Ranger Station. No word on its condition that I know of.

This one started in Opal Creek Wilderness and moved west, southwest and northwest. Currently 192,800 acres with 59% containment. This is the fire that hit Detroit Lake and the towns along Highway 22.

Hikes Within the Fire Area: Virtually all of the Opal Creek Wilderness; the only area not in the fire zone is upper Battle Ax Creek, well beyond Jawbone Flats.

Here are a lot of photos from this fire. It’s not great.

Recent photos show that Jawbone Flats was hit very hard. On the other hand, they also show a fair amount of green trees still standing, so this one looks like a “mosaic” fire pattern.

In more sad news, the legendary environmentalist who did so much to save Opal Creek from the saw, George Atiyeh, was almost certainly killed in the fire.

The entire south side and summit of Whetstone Mountain is in this fire area.

The southern half, roughly, of Table Rock Wilderness is in the fire zone, though not Table Rock itself. Rooster Rock is outside the fire, but most of the trail to it is inside the fire. Pechuck Lookout is shown intact in recent photos, but I can’t find anything about Hawk Mountain Lookout.

Here’s a detail of the north side of this fire:

Hikes Just Outside the Fire Area: Battle Ax and Elk Lake are just east and will be in real trouble if the fire goes that way. Same for the heart of Bull of the Woods Wilderness and for Bagby Hot Springs, which is between this fire and the Riverside Fire.

Molalla River Recreation Area’s south side, everything south of Pine Creek, is within the fire zone; north of there, including most of the trails, is not.

The whole north side of Detroit Lake, obviously including the town, is in the fire zone. The south side is not, so the campgrounds over there, as well as the trail to Stahlman Point, have so far been spared.

Abiqua Falls and Butte Creek Falls are outside the fire zone. Here’s a detailed map of that area:

Outside the Fire Zone: Silver Falls State Park has fire along its southern boundary, but the entire Trail of Ten Falls, in the northern part, has so far remained safe.

This one is just east of the Beachie Creek Fire, and in fact they have now joined. It started on the Warm Springs Reservation and spread west to Detroit Lake. Currently 204,000 acres with 46% containment.

Photos from the Lionshead Fire.

Hiking Trails in the Burn Zone: Jefferson Park and Park Butte, along with the whole east (reservation) side of Mount Jefferson. The Whitewater Trail to Jefferson Park is also within the burn.

The Breitenbush Hot Springs area is also within the burn, and word from the retreat center is they lost about half of their buildings, including all the guest cabins. The lodge is still standing, and some of their volunteer fire crew remained on site throughout. Amazing.

Detail of the Breitenbush area:

All of Olallie Lake is within the fire, but on September 14 their website said the cabins are still standing. Still, this means the whole PCT from Olallie to Mount Jefferson is in the fire zone. (That is really hard for me to type.)

Outside the Burn Zone: Coffin Mountain is just south of this fire. The southwest part of Mount Jefferson Wilderness is so far safe; this includes Pamelia Lake down to Marion Lake and along the crest to Santiam Pass.

This is the fire along the McKenzie River that hit Blue River, Oregon, so hard. Currently 173,100 acres with 220% containment.

I don’t know this area well, so I am just going by maps.

The whole Highway 126 corridor from Delta Campground down to Vida is in the fire zone. Above that – and therefore safe for now – lie McKenzie Bridge, Clear Lake, Cougar Reservoir, and most of the area’s campsites.

Burning northwest of Mount Thielsen, 9,900 acres and 71`% contained. Anything on the north side of Thielsen would threaten the PCT and the Thielsen Creek camping area. It looks like maybe the PCT is okay for now, but the trails coming up to it from the Diamond Lake area are getting hit hard.

Official reports also say the fire is within one mile of the Diamond Lake Resort, which I assume is receiving heavy protection.

Burning along the North Umpqua River and Highway 138. Currently 131,600 acres and 44% contained. Officials on September 13 said more than 100 homes have been lost in this fire.

Hiking Trails in the Fire: About 20 miles of the North Umpqua Trail, including virtually all of it from Apple Creek Campground down to Idleyld Park. Idleyld Park itself is just on the edge of a fire area, and its eastern end appears to have burned.

Here’s a detail of the Idleyld area:

Fall Creek Falls is also in the burn area; note this is not the one in Washington State!

Cougar Creek Trail and the trail to McDonald Homestead are completely within the fire.

Campgrounds: Williams Creek, Bogus Creek, and Susan Creek are all in the fire. Apple Creek appears to be just on the edge of it, and Island looks to be safe so far on the other side of the river.

Here’s a detail of the eastern end: 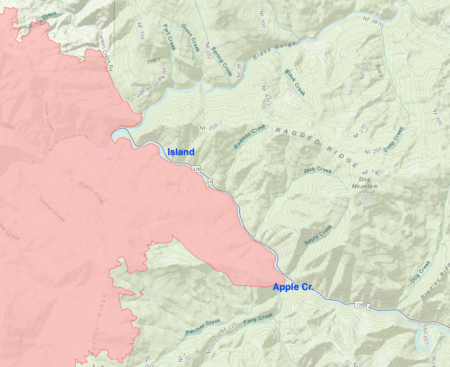