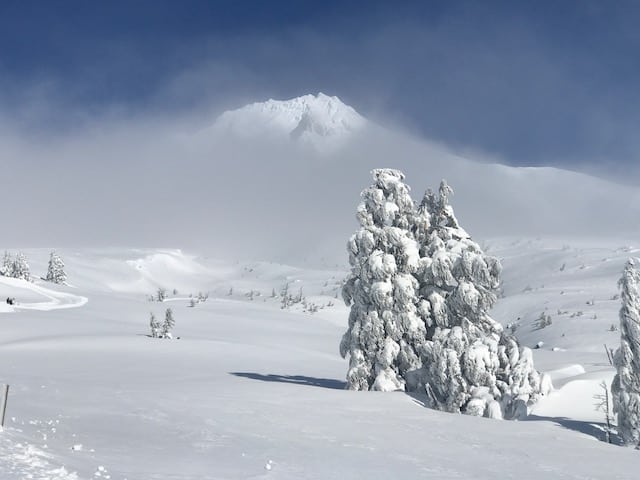 I recently was faced with, for me, a common conundrum: plenty of fresh snow on Mount Hood, a nice day in the forecast, perfect for a snowshoe, but the roads were snowy and icy. So, for the first time, I took the Mount Hood Express bus to Timberline Lodge.

Since I couldn’t find much online about it, here’s a little more about taking the Mount Hood Express to Mount Hood to hike or play in the snow.

What is the Mount Hood Express?

The Mount Hood Express is a public transit bus service between Sandy and Timberline Lodge, with multiple stops along two routes: the Express and the Villages Shuttle. The latter has more stops along the way and only goes as far as Rhododendron. It’s the Express Route you want for recreation on Mount Hood.

I took it from the Sandy Operations Center, a Park and Ride near the Fred Meyer on the western end of Sandy (here it is on Google Maps.) You can park in the lot there, or in the shopping center across the street. The only restrooms nearby are at the Fred Meyer or an AM/PM just off US 26.

Normally the fare is $2, cash on board, but during Covid there’s no charge at all. Crucially, though, also because of Covid, they are limiting capacity to 10 people per trip. This really comes into play on the way back, but on the way up it just means you want to get to the Operations Center a good 30 minutes before departure, and when people start lining up along the sidewalk, make sure you’re among the first 10!

And once a bus fills, it doesn’t take on anybody else. That’s why I suggest you go up from Sandy Operations Center, to make sure you can get in line.

Here are More Ideas for Car-Free Hiking From Portland

The Express Shuttle, which goes to Timberline Lodge, stops at a couple of locations in Sandy, then a few along US 26 including the Mount Hood Village RV Park, the shopping center in Welches, just behind the Subway in ZigZag, Mount Hood Foods in Rhododendron, Ski Bowl, and a few locations in Government Camp.

As the bus approaches each stop, the driver will ask if anybody needs to stop there.

The Villages shuttle has more stops but only goes as far as Rhododendron.

On my trip, on a Wednesday in February, I went up on the 9:15 service, which filled after two stops in Sandy, which means we passed people wanting to board along US 26 and in Government Camp. After Covid, this won’t be an issue, and a regular rider told me this was pretty rare for weekdays. But a big dump of snow followed by nice weather will do that!

Still, those people were looking at a two-hour wait for the next bus, which could also be full, and they won’t know until it arrives.

It was on the way down where things got awkward for everyone. I went for the 2:45 service, and I lined up at 2:15. But there is no real “line” per se, just an area to wait. So six of us sat there for 25 minutes — thankfully in nice weather — but then, just before the bus arrived, six more people wandered over and ignored the informal line system we had created.

We tried to explain there was a line and where the end was, but most of them ignored that, creating a rush for the bus when it arrived. A couple of people were turned away and not happy about it, and there were some words spoken. The Mt. Hood Express people really need to sort this out! I understand they can’t do reservations, but they could at least put up some signage to show there’s a line.

I got on the 2:45, but the next one was at 4:45, when I assume the same thing happened, and after that would have been 7:45! Five hours would be a long damn time to hang out at Timberline.

And then we passed more people in Government Camp on the way down, trying to get back to Sandy.

All of this will be magnified on winter weekends, so my strong advice is — if you can — go during the week.

Getting to Mount Hood Without a Car

I drove to the Operations Center and parked there, but you can also use Mount Hood Express to get to Mount Hood without a car. It’s a bit of a haul, but it goes like this:

Mt. Hood Hikes You Can Do With Mount Hood Express Bus Service

The obvious choice here is Timberline Lodge, which is the end of the line. That’s what I did on a Wednesday in February. From there, you can ski, snowboard, snowshoe (including renting all the needed gear from Timberline) or hike.

Hikes from Timberline include a loop between there and Government Camp, the Mountaineer Trail to Silcox Hut, the ZigZag overlook or even farther to Paradise Park, a short walk to the White River Canyon overlook, or the multi-day adventure Timberline Trail around Mount Hood. Maps will be available at the lodge.

There is only one small snowshoe “trail” at Timberline, which is useful only as a starting point. It is far from your only option! Just go up past the lodge and kick around, making sure to watch out for skiers. Get a map, get a GPS app on your phone, and stay out of the canyons.

You can also connect Timberline and Government Camp via the Glade Trail or the Alpine Trail, going up or down. I think it would be fun to take Mount Hood Express to Timberline, kick around up there for a bit, then cruise about 3 miles and 2,000 feet down to Government Camp and catch the bus back. Or do the opposite for a more challenging experience.

Another great option for hiking or snowshoeing is Mirror Lake and farther to Tom Dick and Harry Ridge. Mount Hood Express stops at Ski Bowl — depending on the conditions, either at the end of the driveway or in the parking lot — and from there it’s a short walk to the Mirror Lake Trailhead.

There is also a great network of winter trails around Government Camp, including the Glade and Alpine trails but also down to Trillium Lake. Get a good map, go for it, then hit the Huckleberry Inn afterwards for pie and ice cream while you wait for your bus.

All of the above winter options also apply here, but there are a couple more options. And for these additional summer options, you could also take the Mount Hood Express Villages Shuttle.

Hunchback Mountain and Salmon River (stop at ZigZag Subway): This one starts from the ZigZag Ranger Station, just a quarter mile past the Mount Hood Express stop just behind the Subway. You probably don’t even need to walk 26 to do it. The hike is long and steep but connects to some amazing views, including Devils Peak Lookout. You could also get to trailheads along the Salmon River for a much easier hike, but that would require either walking or hitchhiking about three miles up Salmon River Road from the stop near the Subway.

The truly ambitious could string together a loop hike that could also be a backup: up Hunchback to Devils Peak, then down the other side and back via the Salmon River, then walk or hitch back out to 26 for the bus.

Read about more great hikes near Portland. Connect with Paul: