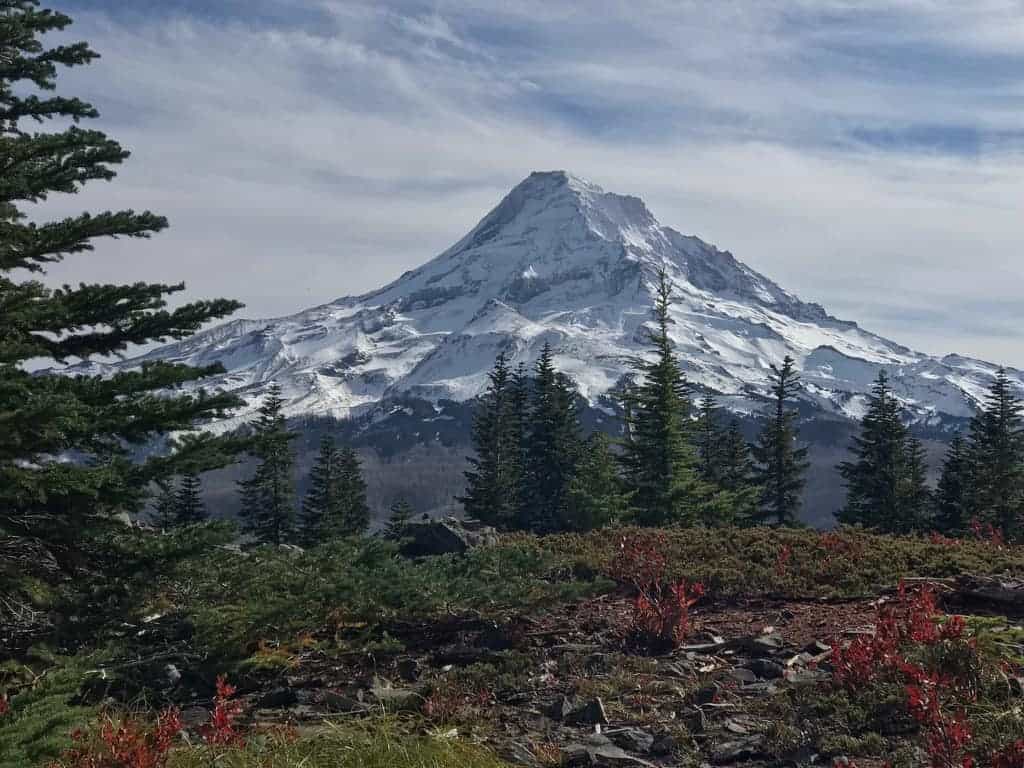 It’s not often that a new hiking trail comes along, much less in a popular area like Mount Hood. But as of 2017 we have a great new destination to enjoy, with one of the best views of the mountain anywhere.

That spot is called Owl Point, and it’s reached from a long-popular trail called Vista Ridge, on the mountain’s relatively quiet north side. Vista Ridge Trail isn’t new, of course, and in fact the path to Owl Point isn’t really new, either; I have had it in my hiking guidebook, 60 Hikes Within 60 Miles of Portland, since 2010. But in those days it was kind of a, well … illegal trail. Or so the Forest Service seemed to think. But we’ll get to that, and to Owl Point.

The drive to Vista Ridge Trailhead is about two hours from Portland, and parts of it are bumpy gravel, parts are brushy, and much of it is tedious. But it’s also one of the highest trailheads around, and the final approach is almost scenic enough to merit all the time in the car.

From the trailhead, you start into the woods and, after a quarter mile, reach a sign with a wilderness permit station. You will also see the results of the 2011 Dollar Fire, which you would go through if you turned right at the sign and headed up towards Eden Park, Cairn Basin, Wy’East Basin and Elk Cove — all tremendous destinations along the Timberline Trail. I did some of that on this same hike, and you can see some of those pictures in the gallery below.

And here is a little video that shows the fire effects:

A Bit of History

Off to the left from the sign, for years, there was another trail, not signed, not maintained, but always inviting. I didn’t know its story until about 2008, when a friend told me that he and some other friends had re-opened it. It was a bit of unauthorized, probably illegal maintenance on a trail that the Forest Service had abandoned years before.

The Forest Service were considering allowing motorcycles and four-wheel drive vehicles in the area, which is right on the edge of the Mount Hood Wilderness. So this renegade trail maintenance crew decided to re-open it, to raise awareness. Then they told me about it. Then I put it in my book. Then others did the same. Then people started hiking it. The trail crew formalized itself into the Trailkeepers of Oregon, which 10 years later is a growing operation that just hired its first staff member.

Meanwhile, the Forest Service wasn’t impressed or happy. They kept putting up a sign that said it was illegal to work on these trails — a sign which, somehow, kept falling down and disappearing. Meanwhile, somebody kept working on the trail, and more and more people started hiking it.

For years, I knew perfectly well who had done this, but I protected their identity. Now, I can not only tell you that the ringleader was a man named Tom Kloster, I can point you to a blog post in which he confesses the whole thing, posts pictures of his co-conspirators and the work they did, and does a great job of telling the entire story, going back to his first visit to Owl Point in 2006. That post was in preparation for the official unveiling of the trail in September 2017, along with a 10th anniversary celebration for TKO, both of which were called off because of the Eagle Creek Fire.

It took 10 years for the feelings to settle and the Forest Service to relent, but as of 2017, the Old Vista Ridge Trail (#626A) is now an official trail once again. And it is more than worth hiking — assuming you like pretty easy hikes to pretty mind-boggling views.

At the sign, you’ll clearly see the results of the 2011 Dollar Fire that torched much of Hood’s north side. As you start along Trail 626A, you’ll see the kind of terrain that the fire wiped out. You will also see why that fire was so intense. The forest here, just under 5,000 feet elevation, is lush and thick, and the ground is carpeted with downed, dry timber — aka Fire Fuel. I remember walking up towards Timberline Trail for years and thinking, “Boy, if this ever gets started, look out.” Same thing applies here. You will also see some of the 178 (!) logs the Trailkeepers cleared from the trail.

The first half mile gains about 300 feet of elevation, but it’s a lovely grade on pine-needle-covered trail, in the shade and the green. After that it levels off, and just under a mile out you will see two side trails leading out to viewpoints. Each of these reveal Hood, the burned area, the Clear Branch drainage, and your destination, Owl Point; it’s the big rocky area on the left. Beyond it, you can see Bald Mountain in the Hood River Valley.

After traversing the top of the ridge, passing many a huckleberry bush with fruit in August and red color in October, you’ll start back downhill and pass through a meadow. This will be wet at times and require some route-finding to keep your feet dry. Just past it, a trail leads right about 500 feet to The Rockpile, which offers an amazing view of Hood — almost as nice as the one you’re headed for.

Back on the main trail, follow along another 0.1 mile to the Owl Point junction; by the way, a nice feature of the trail being official is it now has signs and everything!

The view at Owl Point kind of unfolds as you arrive. Be sure and go all the way to the big boulder pile, and look for the register. Tom and crew maintain this cache, which even includes a photo of the area with various spots labelled.

Off to the right as you face Hood, look for burned Vista Ridge approaching the mountain; right where there’s a patch of green forest, look for a trail heading across open country to the left; that’s the Timberline Trail headed for Wy’East Basin, which is one of the open areas along the tree line. The big hill right in front of Hood is Barrett Spur, which is reached from that same trail. The next big open spot to the left is Elk Cove. The forested ridge off the far left is Stranahan Ridge, on which is Cloud Cap Saddle and the Cloud Cap Inn.

Here is a video of the scene from early October 2017:

You will also see an apparently dying tree right in front of you. That is hardly news in these parts, of course, but the same Tom Kloster — a most thorough researcher and writer — has written an entire blog post about what he calls the Owl Point Sentinel Tree. It includes photos from 1952, when the scene in front of you was reversed; massive burn area in the foreground, green forest beyond — and that tree was probably already 100 years old.

You will see signs for Perry Lake another 0.8 mile along the trail, but it’s honestly not worth the hike — mainly because you will lose 500 feet of elevation on the way there, and gain it coming back, to see what’s really more of a marshy pond. And it’s not the lake you see from Owl Point; that is Laurance Lake, accessed from Hood River Valley and the site of Kinnikinnick Park.

What is worth a few minutes, though, is to head that way for a few minutes to Alki Point, another pile of rocks where you get a view north that includes Mounts Saint Helens, Rainier and Adams.

A word on Laurance Lake, by the way. The Elk Cove Trail starts there and climbs up the left side of your view from Owl Point — obviously to Elk Cove. That’s five miles. From there you can follow along the Timberline Trail for 1.4 mile to Wy’East Basin, where you can add about a 2-mile loop through Cairn Basin and Eden Park, then back to Vista Ridge Trail, then just over four miles to here. And then 0.8 to Perry Lake. And from there, Trailkeepers of Oregon is proposing a trail down to Laurance Lake. Imagine that loop!

Stay tuned on that. Meanwhile, consider joining Trailkeepers of Oregon. Enjoy my photo gallery below, including a hike through the burn to snowy Wy’East Basin. And maybe some day I’ll see you out at Owl Point.