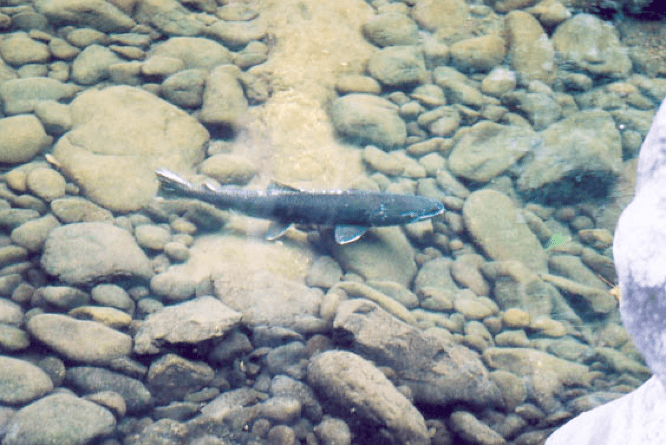 Not many folks have heard of the Salmonberry River, and that’s because for years the only way to access it was to walk a 16-mile canyon with nothing man-made but a railroad. The railroad was okay with this, except in the peak of summer when fire worries made them close it. And the only folks who really knew about it were fishermen; there’s a good steelhead run in that river.

I had it in an earlier edition of my book, 60 Hikes Within 60 Miles of Portland, but a few years back some serious floods and slides wiped out the railroad for good. Since then, I’ve heard spotty reports as to whether you can even hike it or not.

Well, now it appears to be on its way back, as a “rail to trail” project. The Oregonian says it’s part of a dreamy idea: connect Banks to Tillamook via trail! That would be 95 miles long, and they say it could be done within 10 years.

The heart of this trip would be the Salmonberry River, where one can still walk along the railroad, over high trestles and through tunnels — only now without having to worry about trains coming!

While there some washed-out areas where you’d have to scramble a little, due to the floods — see this report on PortlandHikers.org for details and images — the nature and history are both fascinating in there. There’s even a salmon run in the fall.

I hope to see you, someday, on the Salmonberry Trail!

I don’t just hike around Portland, though: I also lead trips to Europe, and I’m working on a book about soccer in England.