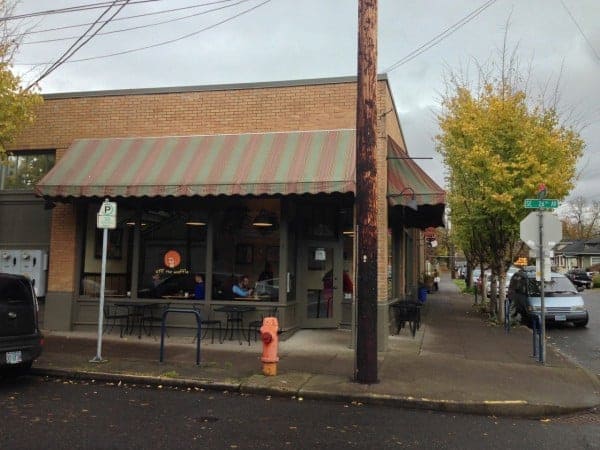 Whenever I check out a new Portland breakfast place, I try to think about the basic thing that sets it apart, the sentence or moment or scene that defines the whole place. In the case of Off the Waffle, a new place at SE 26th and Clinton, it’s actually just one word: cute.

The outside isn’t all that cute, but the logo is – although it looks a little too much like a Simpsons character. Inside, it doesn’t look or feel like a serious restaurant; it’s a cute little waffle place. Then my female companions assured me that the dude behind the counter was cute. The artwork is cute. The email address is [email protected].

It got a little weird when Cute Dude told my female friends to “go in the bathroom and turn down the lights,” which was odd on many levels, really – not the least being that he and my friends are all gay, so I couldn’t really tell what combination of person was being hit on, or if it was just … weird.

Let’s move on. Waffles. Basically the whole place is about Liege waffles, which are firmer waffles, almost crunchy on the outside, with sugar cooked into the crust. So they’re crunchy outside, soft in the middle, and sweet, but not super sweet – which means they make a good base for everything. And basically, Off the Waffle’s food seems to be “stuff on waffles.”

The menu (PDF) has lots of cute names, like Fruit Party and Goat In Headlights and the Self-Fulfilling Prophecy and No, Really Though – all of them a combination of sweet, savory, meat, cheese, egg, and waffle. There are also some smoothies and sides, and all the produce, as well as the coffee, is organic. Here’s the Fruit Party:

And this is the Shmooli: smoked gouda melted atop fresh pear, a dollop of apple sauce and crushed walnuts. drizzled with real maple syrup and dusted with coriander.

The Bombastic has actual vegetables:

And I got the Goat in Headlights, which chèvre, avocado, fresh basil, two sunny side up organic farm fresh eggs topped with smoked, paprika and fresh coriander. drizzled with, arbequina olive oil. It doesn’t look like much on the outside …

… but it has some stuff going on inside:

I guess that’s about what I’d say about Off the Waffle. It doesn’t look like much – it’s the old Sub Rosa location, by the way – but on the inside it’s got some stuff going on. Nothing serious, I’d say, and the food didn’t blow me away at all. My goat thing had too much avocado in it for me, but that’s a personal thing. I don’t recall anybody else saying their food was exceptional. We had fun, though.

And then, of course, we checked out the bathroom. Because … how can you not, with an invitation like that? (And, as you’ll see, I did go in alone.)

I won’t even try to set this up for you:

Not much else I can add at this point. Go check out Off the Waffle. It’s a fun little place.

Buy a signed copy of Breakfast in Bridgetown or one of my other books — including 60 Hikes Within 60 Miles of Portland — in my web store.

Or maybe join a hiking and eating trip to Italy!