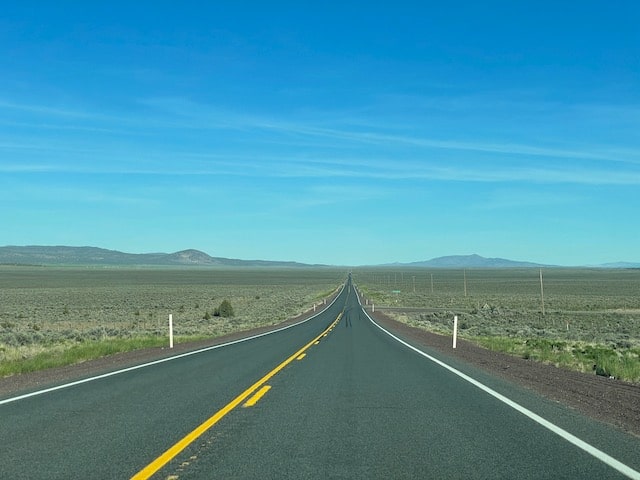 There was a moment on the road today which I have chosen to mythologize.

Normally, I’m not a Big Moment guy. For example, as I left my hometown of 24 years, literally as I got in the car to drive off, there was a small dash of “Oh my gosh, this is happening,” but a lot more of “I need to let my friend in Bend know when I’m getting there for coffee.” Never mind the year of international travel I aspire to after that, or the two decades of life I was pulling away from.

Practical guy, I guess. Or maybe I’m missing some emotional or psychological parts. I’d like to say I live in the moment, but I’m probably a lot more focused on the immediate future.

I’m always reminded that, at least as I heard it and choose to believe it, General Eisenhower launched the D-Day Invasion with the fateful phrase, “Okay, let’s do it.” At some point, you’ve made your plans, you’ve set things in place, so just get on with it. Worry about The Moment later, or let somebody else worry about it.

Then, as I headed over the slopes of Mouth Hood on Memorial Day, a remarkable scene unfolded, one which I had seen coming but still was struck by: the traffic going back into town! It was like the whole Willamette Valley had gone up to the mountains for the weekend, and now they were all headed back at the same time. It was literally miles of cars backed up, in two long stretches that covered most of the three-hour drive to Bend.

After all, or again as I choose to believe it, they have jobs to go back to, in locations where they need to be on weekdays. And they have kids, who have school. And they have houses and yards and stuff. So this was their big, long weekend. And there was a lot of them!

I was going the other way. The lane less traveled, you might say. I had just, an hour before, become intentionally houseless. All of my possessions were in the car with me plus a not-quite-full 5×5 storage unit. My work for the day would be done later, on a laptop in a hotel. Where the great majority were sticking with one program, I was checking out another. They know where they are headed, at least; I don’t. They were going home; I was going east.

There were, and are, a lot fewer people going my way. I wonder where it leads.

Last reply was 11 months ago