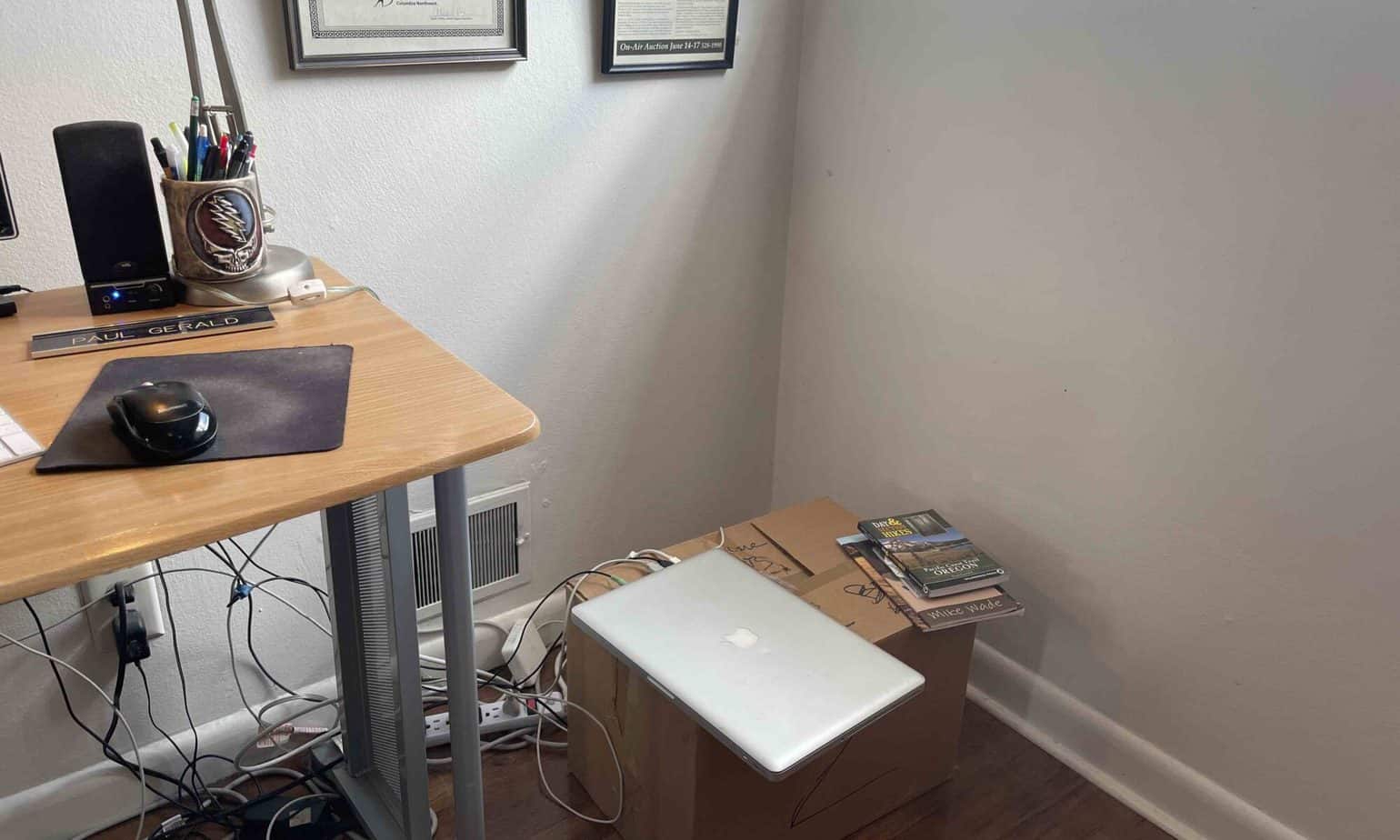 The filing cabinet went away this morning, sold on OfferUp right after I finally organized its contents.

Gave me several laughs, actually. The sightseeing brochure from Norwich, England was still in there from about 2015 because … why, exactly? Same thing for the car insurance documents — from my previous car. And an expired Food Handlers Card.

In the end, two drawers of filing cabinet turned into half of a box: seven or eight files and an accordion thingy for tax receipts. One item that did make the cut was the one-page summary of an idea for a book about baseball, scribbled out on yellow legal paper at a Portland Beavers game in about 2005. I’m keeping that one because I’ll write that damn book someday, because it’s a great idea. I just need a whole season with a minor-league baseball team.

So now my computer now rests on, not the filing cabinet, but the aforementioned and overturned box, in a very awkward-looking big empty space next to my desk — which itself is going away in three days, along with pretty much all the furniture in my place.

The lamp next to the futon now similarly rests on a box filled with mailing supplies, as the table that was there left over the weekend. The futon also goes on Sunday.

On Sunday night I will sleep on a camping mattress in an apartment with almost no furniture.

You know how when you move to a place and all your stuff hasn’t arrived? Or maybe you’re “living out of boxes” in your new place? I’m in the exact opposite situation. Most of my stuff is leaving about a week before I do, which at least has the benefit of making my impending departure both very real — I guess it’s actually time to make some decisions and end some subscriptions — and also less shocking. I mean, I’ll miss the concept of “home,” and my stuff, but when my stuff isn’t around and my home just … isn’t anymore … then, yeah, might as well hit the road.

I’m a Reverse Squatter, hiding out in somebody else’s empty apartment before they show up, and slowly having less and less stuff in the place. And I feel like I need to get the hell out of here before somebody finds me.

Meanwhile, my first camping day in Wyoming has shown up on the two-week forecast page!

I got the car all checked up and cleared for thousands of miles of driving.

Booked coffee with a friend in Bend for the 31st and scouted campsites in Oregon and Utah for the drive out.

Worked with family coming for a visit … in Yellowstone.

Met with an immigration lawyer about work visas in the European Union.

Booked a place in London for most of October.

Started getting suggestions from AirBnB for things to do in Powell, Wyoming — where I check in 17 days from now, to stay for five weeks.

Cancelled my renter’s insurance and, when my agent asked where I’m moving, I just said, “I’m not!”

Next week I get to tell Comcast to eat it.

Some of my artwork is already gone, leaving gaping empty spaces on the wall that won’t be filled.

Sunday the furniture goes. Then everything else goes to storage, Goodwill, friends or the dump.

A week later, whatever is left will go in the car with me. And then I’ll drive away.