I get the question all the time: What’s your favorite hike? And of course, I say, “That depends.” But if it’s fall and I’m looking for hikes near Mount Saint Helens, Ape Canyon can’t be beat for fall colors and views of the mountain, without having to work too hard.

Why You Should Go

This trail visits two worlds not ordinarily seen: the upper reaches of a volcano and the edge of what they call the “blast zone.” Without too much climbing, you can stand in a wonderful old-growth forest and be about 20 feet from an area that was completely obliterated in 1980. At the top, you’ll have a sweeping view highlighted by an amazing geological oddity, right at the base of the volcano.

How to Get There

Take I-5 from Portland, driving 21 miles north of the Columbia River to Exit 21/Woodland. Turn right onto WA 503 (Lewis River Road), which after 31 miles (2 miles past Cougar) turns into FS 90. Continue 3.3 miles, then turn left onto FS 83. The trailhead is 11.2 miles ahead on the left, just before the Lava Canyon trailhead.

You’ll start out in a younger forest, with views to the left of what looks like a big boulder field. But those rocks used to be on the upper slopes of Mount St. Helens, but on May 18, 1980, they tumbled down the hill at about 45 miles per hour, part of a landslide triggered when most of Shoestring Glacier melted a moment after the volcano erupted. But the mudslide stayed generally within the boundaries of the Muddy River, so the forest you’re standing in—even though it was within feet of the slide—was spared. You’ll spend the next 5 miles climbing this ridge, but don’t worry: you’ll gain only a little more than 1,300 net feet along the way.

If you’re on this trail in September or October, you’ll be in the world of the vine maple; its red and orange explosion contrasts beautifully with the evergreen canopy. Keep an eye out for deer and elk, as well. Just over a mile and a half out, get brushy viewpoints facing east to Mount Adams and enter much more impressive forest of old-growth hemlocks and thick vine maple. Just past 3 miles, you’ll actually lose some elevation before a viewpoint that takes in two-humped Mount Rainier off to your right. From here, you can also make out a large waterfall (mostly dry by late summer) on an eastern ridge of St. Helens; we’ll be at the top of that soon!

At 4.4 miles you’ll be out in the open at the 300-foot slot at the head of Ape Canyon, which now stretches away to your right. It’s also visible from a little farther up the trail, where, if you work it right, it makes a heck of a foreground for a picture of Mount Adams:

Just 0.2 miles farther up, Ape Canyon Trail ends at an intersection with Loowit Trail, which goes all the way around Mount St. Helens. Stay to the right at the junction, now on the Abraham Trail #216D.

Wind through another lahar as you go around Pumice Butte on your right, and half a mile later you’ll climb out of it to the east, where a series of rock cairns marks the trail’s path onto the moonlike Plains of Abraham. When the trail dips to the cliff edge, you’ll be at the top of that waterfall, with a sweeping view south.

Turning around here gets you the 11-mile hike advertised, but it’s more than worth it to continue a bit onto the Plains of Abraham, which was also created by the 1980 eruption. Look for trees on the nearby hilltops that are lying down pointing away from the mountain; they were blasted down when the mountain blew.

The Plains themselves are fantastic, especially when the weather is clear and the mountain looms over you. The remains of another weather station are about half a mile up on the right, and the 216D Trail continues a total of two miles from its junction with Ape Canyon Trail to the Truman Trail, which comes up from the Windy Ridge Viewpoint on the other side of Saint Helens. That would be a heck of a car shuttle hike!

Here are a few more views of hiking on the Plains of Abraham, including a video I shot to try and capture the majesty: 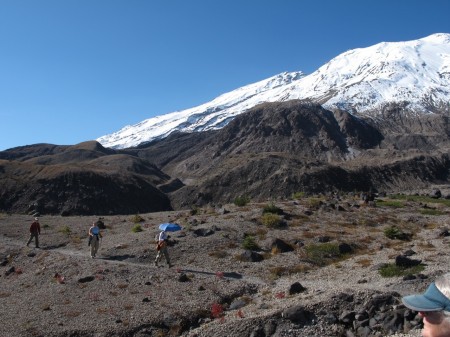 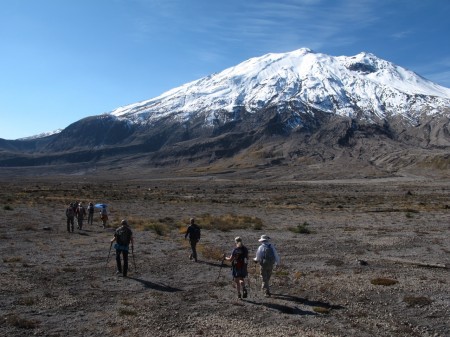 If you’re wondering about the name Ape Canyon, it recalls a 1920s incident in which an apelike “Bigfoot” (decades later found to be a kid playing a prank) threw rocks at some miners in the area. The only connection between Ape Canyon and Ape Cave is in the name. The Mount St. Helens Apes, a local Boy Scout troop that took its name from the Ape Canyon legend, discovered Ape Cave.